Jan. 29 — We are witnessing a chain of events, a series of operations that seem to be carried out in an ordered sequence, one step after another. It all began with the breakup of talks in the Dominican Republic at the beginning of 2017. After that, the strategy against Chavismo put the electoral route aside and revealed its latest path through the White House’s announcement on Jan. 28.

What happened in the intervening period is known.  What will happen from now on may partially — and in a rough way — be anticipated. At least on paper.

The first conclusion is that the opposition forces are not improvising. Not when they chose Juan Guaidó as the new “hero” to be crafted in social networks.  Nor when they began the first phase of internal violence in the popular neighborhoods from Jan. 21 to 24. Nor when they engineered Guaidó’s self swearing-in.  Nor when the meeting of the Organization of American States was held on Jan. 24. Nor the recent United Nations Security Council meeting. Nor with the deliberate blows to the Venezuelan economy. 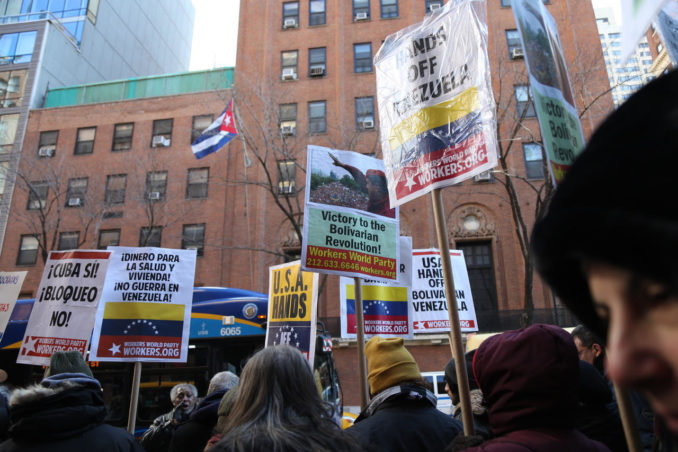 From within the U.S., there is strong support for Bolivarian Venezuela, including this demonstration on Jan. 26, in solidarity at the Cuban Mission in New York.

Their destructive plans were clear when John Bolton, U.S. National Security Advisor, and Steven Mnuchin, U.S. Secretary of Treasury, stood before cameras at the White House Jan. 28 to announce the new assaults on Venezuela’s economy. They declared that the $7 billion belonging to Venezuela’s nationalized oil company PDVSA, now held in the U.S., will be frozen and the money from purchases made from Citgo — PDVSA’s subsidiary in the U.S. — will go to blocked accounts. In other words, [the U.S.] will rob PDVSA.

Immediately, Guaidó announced that he will appoint a new delegation to Citgo. The chain of command is vertical: The “self-appointed” president will obey.

The new attacks on the economy were foreseen. The difference from those that occurred in previous years is the number of sectors under attack, the magnitude of what those entail and the framework within which these attacks are developing. An accounting of the latest numbers provided publicly is as follows: $23 billion in damages, according to Venezuelan Foreign Minister Jorge Arreaza, plus $1.2 billion worth of Venezuelan gold seized in Britain, plus $7 billion robbed from PDVSA — and $11 billion that will be generated from these new attacks, says Bolton.

This chain of events frames the next four steps which have already been announced: street actions on Jan. 30, a march on Feb. 2, the European Union and Britain’s formal declaration recognizing Guaidó, and the Lima Group’s meeting on Feb. 4.

Involved are public steps — the international maneuvers to advance the shaping of the picture — and national steps, apparently to gain time until new and different types of violent incidents can combine with semi-public mobilizations. No media [the opposition] suspects as close to the government will be allowed near these.

It doesn’t mean that every step is a U.S. triumph for the ongoing strategy. It is always necessary to ask how to simultaneously measure victories and defeats in several plans.  For example, isn’t it a defeat if the U.S. fails to achieve a majority in the U.N. Security Council? Or did they know that would not succeed?

Was the sole objective to hold the meeting itself, and in a coordinated way line up all the actors the U.S. needs to take the next economic, political and military steps?

Is Washington willing to move forward despite its differences with such governments as Russia and China over the newly created situations?  For example, what is the impact of the announcements on freezing Citgo’s assets when Russia holds almost half of the shares?

The hypothesis indicates that [the U.S.] will advance on other levels. “We are waiting for them. We are waiting for the violent mercenaries and those who want to get into Venezuela,” said Minister of Defense Vladimir Padrino López  He said this after describing the current scenario: “This is a siege, a script. We are witnessing the same format that was applied in Libya and we are observing the very same incremental events being produced in the Bolivarian Republic of Venezuela.”

“Humanitarian aid” seems to be a central point in this plan moving forward like clockwork. Guaidó and various right-wing representatives claim they will bring the aid into the country, although they have not yet outlined how it would be done. They say it would be the turning point in case the Bolivarian National Armed Forces refuse to let it pass.

In what territory do they plan to set the stage with cameras, diplomats and agencies in the front — and the paramilitaries and criminal gangs in the shadows? Will it be on the Colombian border?

It is necessary to characterize the local and international actors.  In the first case, there are the right-wing elements connected to the United States, such as the Popular Will Party to which Guaidó belongs. This party has been linked to criminal scenarios since its birth. In the second case, there are the individuals in charge of Operation Venezuela: Donald Trump, John Bolton, Mike Pence, Mike Pompeo, Elliot Abrams and Marco Rubio. These promoters of U.S. neoconservatism are linked to the evilest plots involving worldwide interventions, whether declared or covert.

By describing the scenario, including the possible sequences — and the questions about the limits or lack of the U.S.-led advance — we can clarify the type of confrontation we are facing.

The Venezuelan scenario has been uncoupled from notorious past scenarios in other countries in Latin America. It is related to such issues as Colombian paramilitarism and is seemingly part of the U.S. strategy applied in the Middle East. A mistaken analysis can lead to gross errors of judgment.

The magnitude of the new factors requires updating our analytical tools. We are facing a new scenario within an unstable world, filled with conflicts, with the emergence of U.S. power and aggression trying to recover a land that has been escaping its control.

Venezuela is one of the central countries that the U.S. seeks to hold under its control — or in ashes. Chavismo sees its challenge clearly and will fight back.

Teruggi is an Argentine journalist and social scientist who lives in Caracas and who contributes articles to various left publications. Translation by Michael Otto. Original: pagina12.com.ar.