After 35 long days without pay, 800,000 federal workers received word late on Jan. 25 that the government shutdown was over — at least temporarily.

Without an agreement to fund a racist, anti-migrant border wall, the president reopened the closed departments of the federal government. Furloughed federal workers were called back to work; those working without pay will be getting paychecks, with a promise that back wages will be paid soon. Not so for contract workers.

The American Federation of Government Employees, the largest of several federal worker unions, rightly called the mass furloughs and payless paydays a lockout. Normally when union members cannot strike by contract, there is also an agreement they cannot be locked out by the boss. Federal workers are legally barred from striking — the basis for Ronald Reagan’s firing air traffic controllers in 1981.

Many federal workers demonstrated against this lockout, some just a few hours before the shutdown ended. Three days earlier, hundreds had protested inside two Senate office buildings in Washington, D.C., when twelve union activists were arrested for sitting outside Senate Majority Leader Mitch McConnell’s office. As the news of the reopening became known, protests turned into celebrations.

Millions of workers and their families have been harmed by this, the longest U.S. government shutdown in history. Workers at private companies with government contracts were affected. Small businesses were hurting.

Had the shutdown continued, the lost purchasing power of unpaid workers  — an estimated $6 billion — and of tax revenue would eventually have cost more jobs. Funding for survival programs such as food stamps, the WIC (Women, Infants and Children) Food and Nutrition Service, Indian Health Service, school lunches and Medicaid would have run dry.

The bigot-in-chief created a public safety emergency, affecting everything from air travel to food inspection to air and water quality. Nature also was threatened: from trash piling up in national parks to distressed marine mammals not being rescued. Scientific research was drastically curtailed. 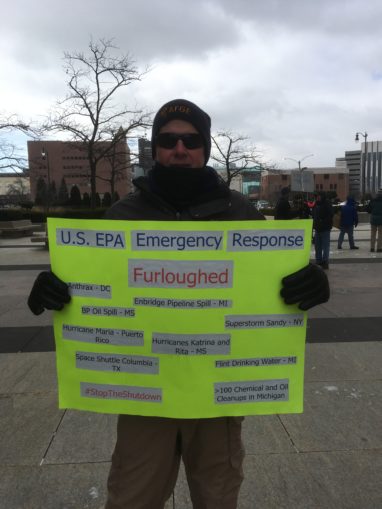 Members and allies of the American Federation of Government Employees rallied outside the federal building in downtown Detroit Jan. 25. Braving temperatures in the lower teens, the group chanted, “End the shutdown” and “No paycheck, no peace.” There was tremendous solidarity with these workers in their time of hardship, with Metro Detroit AFL-CIO organizing food drives and many Detroit restaurants offering federal workers free meals.

Why did Trump back down?

Most people do not believe that Trump acted out of compassion for workers, who were struggling to put food on the table and keep a roof over their heads. Nor do they believe that there is a “national emergency” at the Mexican border mandating construction of an enormous wall.

On the contrary, a majority in an AP News poll blame the president for the shutdown. As of Jan. 25, his falling popularity ratings — at 37 percent — are the lowest of any U.S. president in 80 years. (tinyurl.com/ydejdvpe)

Resistance to the shutdown grew. Unpaid workers at the Transportation Security Administration and other “essential” agencies phoned in sick in large numbers. Sara Nelson, president of the Association of Flight Attendants, called for a countrywide general strike to stop the shutdown — remarkable solidarity from a union whose members were working and not locked out.

The fightback was not on the scale of resistance elsewhere in the world — like the Yellow Vest movement in France or the All-India General Strike — or even the education worker upsurge in the U.S.

But the growing potential for worker organizing was there. The ruling class knew and feared this.

In addition to fueling worker resistance, the shutdown had a negative effect on the capitalist economy. A $6 billion loss in a month is no small change. But that was just the tip of the iceberg.

Flights were cancelled at New York’s LaGuardia airport, one of the country’s busiest. For corporate executives who conduct business worldwide, being able to fly safely is essential. Companies seeking exemptions under Trump’s import tariff regime were hamstrung because the people who could authorize those were furloughed. Farmers, small businesses and potential home buyers could not access government financing.

This preventable economic slowdown occurred as leading bourgeois economic analysts are warning of a new recession, i.e., a crisis of capitalist overproduction that they are powerless to prevent. Some of them are worried about “social unrest.”

But federal cops and military personnel at the FBI, the Coast Guard and, ironically, the Border Patrol were not getting paid. The shutdown was undermining the repressive capability and the basic functioning of the capitalist state as an instrument of class rule.

The president — darling of the ultra-right, trumpeting a racist, xenophobic “build the wall” mindset to his electoral base — faced pressure to end the shutdown from both the masses below and the one-percenters on top.

Mainstream media were awarding credit to House Speaker Nancy Pelosi for ending the shutdown while refusing Trump’s demand to fund the border wall. Daily Kos, an online news source promoting mainstream Democratic Party politics, even posted a petition for people to sign thanking Pelosi: “[She] deserves enormous credit for holding her Democratic caucus in line, and refusing an inch. Her move to cancel the State of the Union Address was brilliant, and achieved the intended result of making Trump agree to end the shutdown (for now).”

This view minimizes the many factors that created pressure on Trump: especially the role of workers who risked being disciplined or fired if they were found to have acted in concert by staging sick-outs or other work resistance. The praise for Pelosi raises no objection to the Democratic backing of “alternatives” to a physical wall, which will also result in repression of migrants through fencing and increased “border security.”

Threat of a new shutdown after Feb. 15 remains, though there may be too much pressure on the White House for that to happen. If the masses of people harmed by this recent outrage want to prevent another, heaping accolades on Pelosi won’t achieve that goal.

The best bet is to follow the lead of AFA President Nelson — and shut down the whole capitalist economy with a general strike.