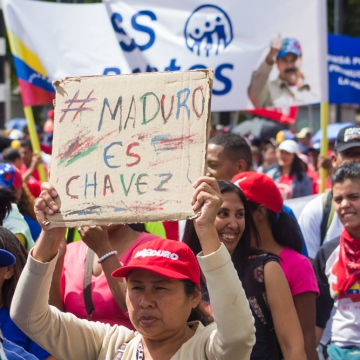 The Venezuelan people took to the streets of Caracas on Jan. 23 in a huge popular mobilization in support of President Nicolás Maduro and the Bolivarian Revolution.

Workers all over the world have a stake in Venezuela’s future. While the U.S. government strangles millions of workers here by shutting down social services over Trump’s racist wall, the Pentagon remains open for business and is taking aggressive action against workers abroad.

Guaidó’s backers in Trump’s White House, fascist leader of Brazil Bolsonaro, and all other regional puppets of the U.S. government have already eagerly accepted Guaidó as one of their own, even as he cowers in the Colombian embassy in Caracas. They want to wipe out the gains made by Maduro and his predecessor Hugo Chávez from the pages of history. Iraq war architect John Bolton says that regime change in oil-rich Venezuela is a “big business opportunity.”

We must be shoulder-to-shoulder with our class in Venezuela and fight back! The struggle for Bolivarian Venezuela’s future is a struggle all class-conscious workers worldwide must take part in. If workers want free health care, strong labor rights, an end to racism, women’s rights, LGBTQ rights, and a decent society to raise children in, we must mobilize to defend Venezuela’s gains.

Silence is not an option!

The International Action Center and Workers World Party, along with many other progressive organizations, have called for national mobilizations in support and defense of the Bolivarian revolution. Join us in the streets at these important actions!

This is a partial list of actions called by many organizations. Sign up to add your event using this form.

Rally to Support the Bolivarian Revolution and President Maduro!

NO Coup, No Military Intervention: Hands Off Venezuela!

Emergency Action! Say NO to U.S.-backed coup in Venezuela!

No War on Venezuela!

Emergency Action! Say NO to U.S.-backed coup in Venezuela!

US Hands off Venezuela! No coup! No sanctions! No war!
Monday, January 28, 2019
5pm ET
Delaware and Kenwood

Cuban Mission to the United Nations

No Coup! No U.S. Intervention! Solidarity with Venezuela!