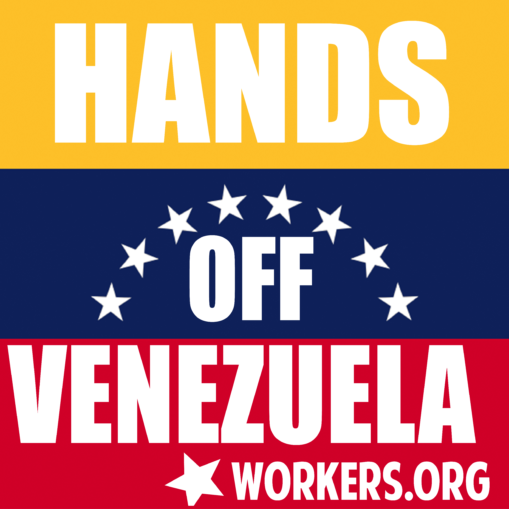 Workers World Party calls on the movement here in the U.S. to unite in the streets to defend the elected Nicolás Maduro government of Venezuela against Washington’s blatant coup attempt, aimed at rolling back the gains made by the Bolivarian Revolution. This aggression is an attack on working and oppressed peoples everywhere.

Venezuela’s sovereignty is at stake as the Trump administration has formally anointed a small right-wing grouping with unknown “leaders” in Venezuela, calling it the “legitimate” government. This refusal to recognize the will of the Venezuelan people, who have consistently elected leaders committed to the path of independence from Washington, is imperialist arrogance taken to its height.

It is also a clear threat that U.S. imperialism intends to intervene openly to overthrow the Venezuelan government and install its own puppets, as it tried to do in 1961 with the unsuccessful Bay of Pigs invasion against revolutionary Cuba.

In the 21st century alone U.S. imperialism has lied to the population here, inventing pretexts to bomb, invade and overthrow governments in Afghanistan, Iraq and Libya, committing war crimes and murdering millions of people. It has killed other hundreds of thousands in Syria through subversion, sabotage and bombing. These costly U.S. wars devoured hundreds of billions of dollars and created tens of millions of refugees abroad, even as public services here are starved for funds.

There is no doubt that were this latest imperialist intervention in Venezuela to succeed, it would increase the tide — and the suffering — of economic and political refugees who already are fleeing repressive governments installed in Central America with Washington’s blessing.

Let’s be in the streets to say: No more coups! No more regime change! Hands off Venezuela!