This article was first published in Avante, the weekly newspaper of the Portuguese Communist Party, on Dec. 27. Its author was a former member of the Secretariat of the PAIGC, the party leading the struggle for the liberation of Guinea-Bissau and Cape Verde. Translation by WW Managing Editor John Catalinotto.

The United States has announced a “new” policy for Africa. It was up to National Security Adviser John Bolton — known for his reactionary and aggressive positions — to reveal the basics of Washington’s strategy for the African continent. This policy was approved by President Donald Trump on Dec. 12. 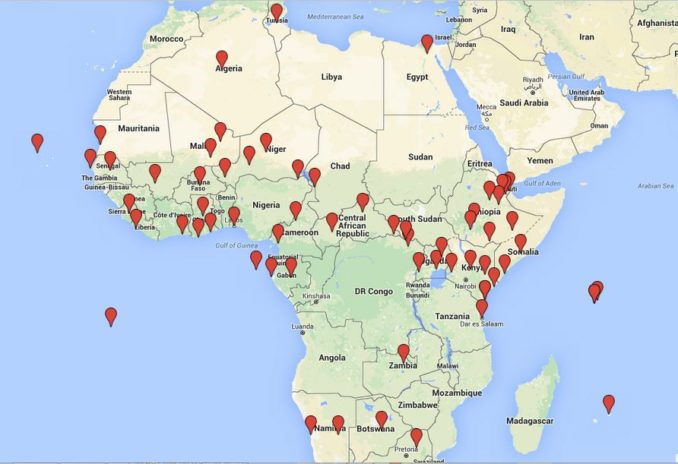 U.S. military bases and other operations facilities from 2002-2015

Speaking at the right-wing Heritage Foundation on Dec. 13, Bolton defined three priorities.  The first was to strengthen trade ties with African countries through agreements that benefit both parties.  He said, “We ask only for reciprocity, never for subservience.” The second was to contain the “proliferation of radical Islamic terrorism” — namely, “ISIS, Al-Qaida and other terrorists,” which “targeted United States citizens and interests.”

The third priority was to ensure that U.S. “aid” is efficient and effective, in line with U.S. interests — while “unproductive aid” should be ended, including United Nations peace missions. He stated, “Countries that repeatedly vote against the United States and international forums that would take action against U.S. interests should not receive generous American foreign aid.”

Bolton stressed that the main aim of U.S. strategy is to oppose and, if possible, to prevent China’s and Russia’s good and cooperative relations with African countries. He said that these “great power [U.S.] competitors are rapidly extending their financial and political influence across Africa” and “are deliberately and aggressively targeting their investments in the region to gain a competitive advantage over the United States.” (CSPAN, Dec. 13)

In essence, there is no change of strategy. But Bolton’s speech raises concerns about his threat to reconfigure or end funding for U.N. missions in Africa.  These missions contribute to the search for peaceful resolutions of conflicts and wars in Sudan, South Sudan, Mali, the Central African Republic, the Democratic Republic of Congo, Western Sahara and Somalia.

In fact, many of these conflicts and wars have been caused by interference from Washington and its allies. Under the pretext of the fight against terrorism, the Pentagon maintains several military bases in Africa, from Djibouti to Niger, under the United States Africa Command (Africom).  Africom has about 7,200 staff members in “advisory missions” in many African countries.

Bolton has promised that Washington will reduce the number of troops stationed in Africa by 10 percent and has urged the countries on the continent to assume their own defense. The White House adviser also raised the possible transfer to African soil of Africom, which has had its headquarters in Germany since its inception in 2007.

Moussa Faki Mahamat, chairperson of the African Union Commission, responded to the announcement of the U.S.’s “new African policy” while speaking at the Africa-Europe Forum in Vienna on Dec. 18. He reminded the group that “investors have their interests, we have ours, we know better than anyone else with whom we should trade and cooperate.”

Whether under old or new guises, within the framework of its strategy of world domination, U.S. policy toward Africa does not change.  It will continue to be one of meddling, military intervention and exploitation of the continent’s wealth. However, this policy faces increasing resistance and opposition from the African peoples, who continue to fight for their complete emancipation.