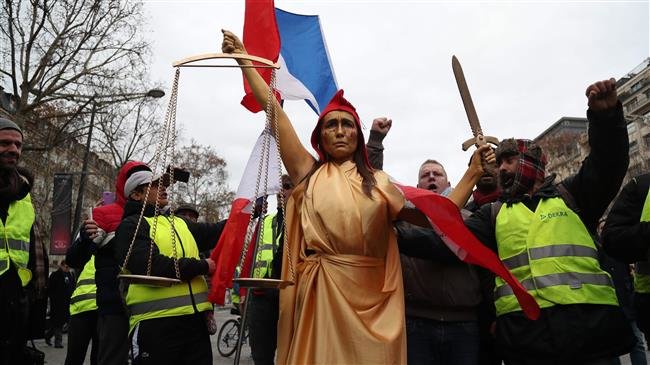 Paris, France, Dec. 23 — According to representatives of police trade unions leaving the Ministry of the Interior on the evening of Dec. 19, “the negotiations were difficult, very difficult.” Nevertheless, it took only a few hours for them to win “the highest salary advances” for their members in nearly 20 years.

Interior Minister Christophe Castaner had to concede: Police salaries were increased by 120 euros ($137) a month for beginning cops and 150 euros ($171) for veterans. This was more than what other civil service employees were offered during the negotiations on Dec. 20 and more than what President Emmanuel Macron had promised the Yellow Vests movement ten days earlier — which was almost nothing.

Police officers had been complaining for years about their poor working conditions and pay, not to mention the 24 million hours of overtime that the state has still not paid them, nor the costs of reimbursement for when they are injured that the Social Security workers’ compensation fund takes a long time to deliver. Neoliberal austerity also affects the police.

More recently, on television or on the Internet, anonymous police officers have expressed their frustration and some even unhappiness with their (political) superiors’ orders that they step up repression: against the Yellow Vests or, before that, the student protesters, political activists occupying “Zones to Defend” (ZAD), environmental activists or demonstrators against laws that make the labor market flexible, that is, laws that remove protection for workers. Tongues are loosening: “It is our friends, our brothers, our parents, our children whom we are being told to repress,” we hear from police officers.

As early as two days after the Dec. 15 “Act V of the Yellow Vests,” several national police union organizations, which are not allowed to actually go on strike, announced their intention to hold a “closed police station” day on Dec. 19. Because the Emmanuel Macron government has become dependent on the repressive force of the cops to stop the mass movement of Yellow Vests, it would try to keep the police satisfied.

An atmosphere of fear

The tipping point for this development is clearly identifiable: the state of emergency that the government declared throughout the country in November 2015 after the terrorist attacks that struck here has triggered a terrifying spiral of repression and has allowed those in power to create an atmosphere of fear.

It was under pressure and threats from this extreme right-wing of Islam, the political Islam from Al-Qaida to the Islamic State (IS), that the repressive state of emergency was imposed on the French people and renewed five times in a row. That’s the first jaw of the vise.

Although the state of emergency was lifted at the end of 2017, the fact is that most of the exceptional provisions it contains now have the force of law: searches, preventive arrests, protective perimeters, individual house arrest and border controls are now authorized under the “Law strengthening internal security and the fight against terrorism” of Oct. 30, 2017. Hence the misuse of this exceptional legal arsenal to reduce public freedoms in France, to the point that what are in danger now are the rights to demonstrate or express one’s opinions.

All those who have recently participated in demonstrations in the country know what human rights organizations, and even police officers, have been denouncing for months, as we have mentioned, and sometimes even journalists, when they, too, are beaten up: that the many interventions by the police are disproportionate and excessively violent.

These interventions include intense flash-ball fire at ground level, frequent use of sound or stun grenades, systematic use of tear gas and water cannons against peaceful protesters, the practice of containment traps to prevent people from joining other protesters, arbitrary arrests, confiscation of medical equipment from street medics who volunteer at marches to treat injured demonstrators, intimidation, provocations for no reason, sometimes insults, and keeping minors in police custody.

The state aims to stop the revolt

All these facts shock and worry the French. But that anxiety is precisely what the state aims for: to make the people stop their revolt.

From the very first days of the mobilization of the Yellow Vests, rumors circulated that the protesters were being manipulated by the ultra-right National Rally (formerly National Front), that it was a “power grab” remotely controlled by the far-right party whose leader is Marine Le Pen. The second jaw of the vise. This is indeed the argument of the Interior Minister’s speech. What “evidence” did he provide? Only that there were some xenophobic comments noted here and there among the demonstrators.

Of the several hundred thousand Yellow Vests participating, it would have been miraculous if none of them were racist. From there to extrapolate that the ultra-right is leading this movement was a big leap that Interior Minister Castaner was only too happy to take. It’s a clever fraud. In this way, he tries to 1) discredit all Yellow Vests; 2) keep the young people who live in the suburbs, where there are large immigrant populations, separate from the current rebellion; and 3) create a false image of Emmanuel Macron as a rampart against “fascism.”

The far right has up to now failed to gain the leadership of the mobilization — for the fundamental reason that the vast majority of the French people are hostile to its racist program. What is discreetly emerging, however, is a shift of the state to the far right. Surveys indicate that more than half of the police and military would have sympathies with or vote for the National Rally.

The far right is at the very heart of the repressive state apparatus. This was also revealed a few days ago in an openly anti-immigrant letter signed by a former Minister of Defense and a dozen senior army officers denouncing not only the “Global Pact for Migration,” adopted under the aegis of the UN at the Marrakech Summit, but also “Islam as a threat to France.”

The Yellow Vest grievance sheets explicitly demand that “asylum seekers be treated well (…) we owe them housing, security, food, as well as education for minors.” So let us be very clear. It is not the Yellow Vests that are xenophobic and racist, but increasingly large components of the French elite. The elites will not hesitate for a moment, when the post-Macron era comes, to entrust power to the far right if necessary.

That is to say, if their odiously iniquitous capitalist order were really threatened; if the French people, thirsty for justice, their hearts full of renewed hopes, shouting for their joy in regaining their dignity, gathered in revolt and aware of their strength, managed to get back on their feet, to become masters of a collective future of solidarity and progress, then the elite would look to the ultra-right parties as their solution.

President Macron, who has slavishly bowed at the feet of billionaires, chose not to satisfy the deep needs of the French people and even sinks deeper into the path of repression every day. This “rotten strategy” plays into the hands of the National Rally.

Despite differences between the right and the far right — differences dramatized by the media, which are differences in degree, not in their essence — there is in reality no discontinuity. The right wing of high finance, which Emmanuel Macron serves, and the extreme right of the reactionary bourgeoisie of Marine Le Pen form a terrible, dramatic political continuum that unites to defend a dying capitalism. One is neoliberal-globalized, the other obscurantist-nationalist, but both want the current economic system.

Over and above mutual personal hatreds, which exist, common class interests will soon bring them closer together in an effort to save their system, whatever the cost.

The people will have to find in themselves the energy to amplify their struggles in order to free themselves from the deadly vise where the jaws of the two-headed monster of the modern far-right will surround them: terrorist and reactionary political Islam on one side, selfish bourgeois and racist chauvinism on the other side. The danger is there.

Meanwhile, on Saturday, Dec. 22, for the “Act VI” of their mobilization, the Yellow Vests tested the effectiveness of the intelligence services. Watched very closely by the eyes of the Ministry of the Interior, their social networks called for a rally — a highly symbolic one — in front of the gates of the Château de Versailles. The prefect quickly ordered its closure and immediately sent the CRS [riot police] to guard the area and protect the businesses.

The protest was a decoy! Some 20 Yellow Vests, no more, were present on the scene that morning, to laugh at the joke and mock the mass arrival of the police.

At the same time, in Paris, most of their comrades dressed in yellow, who, to keep the action a surprise, were notified at the last minute, gathered around the Place de l’Étoile or around the Basilique du Sacré-Cœur at the top of the slopes of the Montmartre hill, among others. And since Parisian security devices had boasted of being “extremely mobile” in previous weeks, groups of Yellow Vests played cat and mouse with them, making them run all day long in the streets of the capital, blocking the traffic routes at random, here and there, to a concert of horns of supportive motorists and the applause of amused tourists.

On Dec. 22, however, the police did succeed in stopping, at different points in the territory, several particularly active “symbols” of Yellow Vests. This was the case with Éric Drouet, arrested at midday in the Madeleine district of Paris and placed in police custody for “unlawfully organizing a demonstration, participating in a group formed for violence or degradation, and carrying a prohibited weapon.”

The weapon in question was a piece of wood. Its owner, a professional truck driver, keeps it on him at all times as a means of defense, according to his lawyer. Immediately after the announcement of Drouet’s arrest, hundreds of Yellow Vests emerged from this sovereign people, all proclaiming themselves “leaders of the movement” and demanding Drouet’s release … or their own arrest!