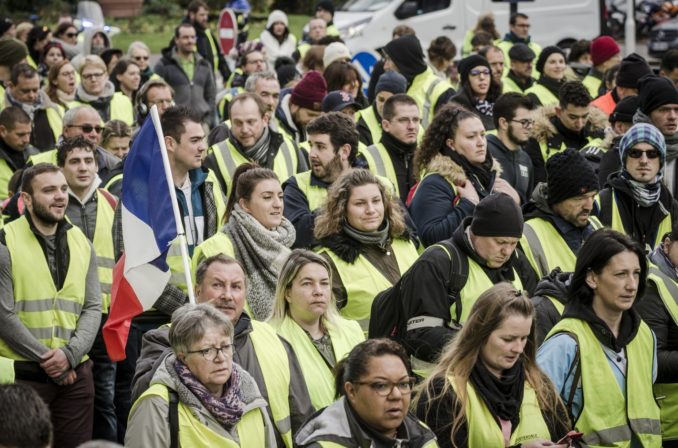 Dec. 9 — The French government deployed 89,000 law enforcement personnel throughout France to confront “Act IV” of the national mobilization of the “Yellow Vests” on Saturday, Dec. 8. There were some 8,000 police officers and gendarmes in Paris alone, equipped with armored personnel carriers to protect “government buildings” and to break down street barricades. This is more than what was put in place during the revolutionary events of May 1968 when student rebellions sparked a general strike of 10 million workers.

Almost all the country’s squadrons of gendarmes (military personnel responsible for police missions) and dozens of CRS companies (special riot police forces), supported by security and intervention brigades of the Police Prefectures (local police), were present, while most of the remaining personnel on leave were recalled to service, or “de-neutralized.”

The repressive strategy, which was visibly ineffective during the confrontations on previous Saturdays, had been modified.  It was no longer a question for these cops remaining stationary but of being mobile to “get in contact” with the demonstrators and “apprehend the thugs (called casseurs or breakers).”

Over the past week, all this had been organized to reflect the government’s rhetoric, which dramatized the events and the corporate media’s portrayal of violence in order to increase tension and fear. The goal was to discourage Yellow Vests from demonstrating both in the capital, Paris, and anywhere else in France.

For several days, the police, acting like an athletic team, were sent on practice missions to warm up on “training grounds” — the streets around high schools — before their Dec. 8 “match.” They made use of the opportunity to hit students with all their force, indiscriminately. On Thursday evening, Dec. 6, no fewer than 760 adolescents aged 12 to 18 were arrested throughout the country.

In Mantes-la-Jolie, a working-class town in the Paris suburbs known for its impoverished slums, more than 150 young people were filmed near their school, where zealous CRS cops forced them to kneel, hands on their heads, in tears. The cops were clearly proud of their haul. Dozens of the youth — almost all traumatized minors — had to spend the night of Dec. 6-7 in police custody, crammed into cells.

A week ago, the deputies of the presidential party, La République En Marche, who have a majority in the National Assembly, passed a law prohibiting children from being spanked. This means that thanks to President Emmanuel Macron, parents no longer need to slap their rebellious offspring — the police do it harder! We already knew that the kids of this “France that wins” (France won the soccer world cup, but what else?) have no future. We now know that their present is to be clubbed!

On Dec. 6, when the government announced a moratorium on the fuel tax increase and then canceled it (as if that were enough to stop the struggle!), the main labor union leaders were called on to save the Republic by a completely lost and still silent President Macron.

What did our union leaders, including those of the CGT, do? In a joint statement, they welcomed the government’s “actions” in the direction of “social dialogue”! They condemned the violent forms of demands made by the Yellow Vests — without a single word about police violence.

And for those who called for a strike by truck drivers starting on Dec. 9 (the CGT and FO unions), they canceled the strike notice and abandoned the decision to set up blockades! The reason? Prime Minister Édouard Philippe is said to have “given satisfaction by exempting the payment of overtime from social security contributions.” Impossible to believe!

At the very moment when the massive mobilization of the people, for the first time, was able to stop the government’s social war machine, and when nearly 80 percent of the French people support the Yellow Vest revolt — and when a general strike of workers is more than ever necessary to amplify and especially organize the movement — the union leaders are holding back the struggles!

Immediately, subsections of the CGT federation of unionists, first and foremost in the chemical industry, grew angry and called on their members to mobilize. This had the effect of pushing back their top leadership, who finally issued a new communiqué to try to make the members forget the leaders’ total confusion and their reformist abdication. At the same time they still distanced themselves from the Yellow Vests.

What “reforms” can be expected from a regime that is, at its last gasp, directing a capitalist system in systemic crisis? All that can be expected is the continued destruction of social gains and the lies of a discredited government.

Many people were arrested in train stations or other public places during the approximately 5,000 police checks carried out even before the mobilization began. Dozens of Parisian metro stations were closed, with scores of streets in the capital blocked by armed CRS. The regime called this “preventive measures.”

But, above all, it amounts to terrorizing the population and de facto banning Yellow Vests from demonstrating in peace on the Champs-Élysées — as the Ministry of the Interior itself had explicitly authorized. The question arises: Are public freedoms still respected in France? Are the rights to express one’s opinion freely and to demonstrate in peace (which are constitutional rights here) still guaranteed in President Macron’s “democracy”?

Is this how the government plans to calm down an angry people, who are rightfully crying out against social injustice? By bombarding them with (15,000!) tear gas grenades and tons of cold water to keep them quiet? By having them charged by brigades of dog handlers, mounted policemen, armored vehicles driven by mobile cops, as was the case this Dec. 8 in Paris?

Enthused and excited by the outstanding performance of the police, the “journalists” from 24-hour news channels — kept on a leash by big money and reassured by the presence of uniformed officers and security experts to comment on the events of the long-awaited day when the Yellow Vests were to be crushed — exclaimed: “How beautiful the police are!” “Everything is going well in France today.” “Finally a recovery in hand!” They insisted that order must have prevailed.

Media propaganda told us that order reigned — against a backdrop of street fires and violent arrests. However, in the late evening, Paris City Hall issued a catastrophic statement, indicating: “The damage was much greater than on Saturday, Dec. 1” (the last Yellow Vest protest).

In many provincial cities, demonstrations went further than in the capital. In Bordeaux, Lyon, Toulouse, Saint-Étienne, Nantes, Marseille, etc. — “We had never seen such things before” — there were countless clashes with the police, street barricades, street furniture fires, raids on bank branches, window breaking and looting of shops, all under the recurring slogan, which seemed unifying, of “Macron resign!”