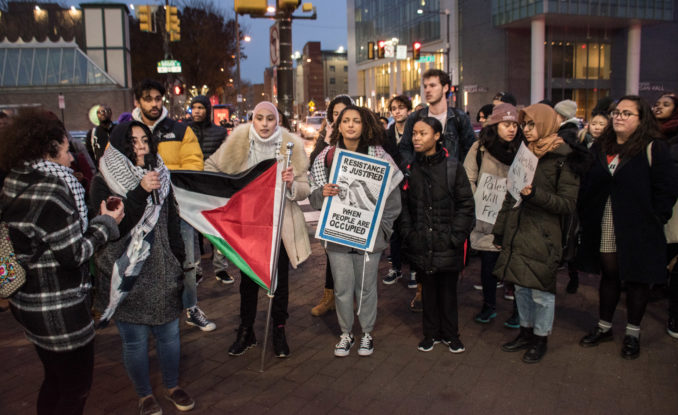 Chanting “From the river to the sea, Palestine will be free,” over 100 activists took to north Philadelphia streets around Temple University campus on Dec. 6 to demand that university officials stop their attacks on professor Marc Lamont Hill for his political activism in solidarity with Palestine.

Palestinian author and activist Susan Abulhawa kicked off the rally at Temple’s Bell Tower by speaking on the millennium-long history of the Indigenous Palestinian population in the region now known as Israel. In November, Israeli officials denied Abulhawa entry to attend a conference of Palestinian writers in the West Bank.

A second mini-rally took place outside the offices of the Temple Board of Trustees. The demonstration for professor Hill, initiated by Students for Justice in Palestine (SJP) and endorsed by over a dozen community organizations, was called to denounce Board chair Patrick O’Connor’s push to fire the professor. Hill was under attack for a speech he gave on Nov. 28 at the U.N.’s International Day of Solidarity with the Palestinian People.

Dr. Hill, a tenured professor at Temple, author, community activist and media commentator, had just returned from a trip to Palestine. At the U.N. meeting, Hill spoke at length about Israel’s systematic stripping away of freedoms for Palestinians, including passage of more than 60 laws that deny Palestinians access to housing, education, family reunification and other freedoms maintained for Jewish citizens of Israel.

Hill addressed the growing “relationship of resistance” between Palestinians and Black Americans. “Palestine will be free from the river to the sea,” Hill said.

Claiming that this amounted to “hate speech” and a call for “the destruction of Israel,” Zionist forces in the U.S. launched an attack against Hill that resulted in CNN firing him Nov. 29 from his position as an occasional commentator.

O’Connor, a white lawyer, said Hill’s talk at the U.N. “blackens” [Temple’s] name unnecessarily,” which is questionable language when used against Hill, a Black professor. O’Connor — one of Bill Cosby’s defense lawyers in Cosby’s sexual assault case — was himself asked to step down as Board chair by the Feminist Alliance.

In January 2015, Hill was part of a delegation of Dream Defenders, Black Lives Matter and Ferguson organizers who traveled to Palestine. In July 2018, Hill organized a forum on Palestine in Philadelphia that included a significant panel addressing solidarity between Black communities in the U.S. and the Palestinian struggle.

In November 2018, Hill led a delegation of Black activists to Palestine where they witnessed firsthand the oppression of Palestinians. Having just returned from Palestine, Hill advocated equal rights for all people in historic Palestine and the right of Palestinian refugees to return to their homeland. He spoke out against apartheid conditions for millions of Palestinians in both Israel and the occupied territories in the West Bank and Gaza.

Gabriel Bryant, from the Campaign to Bring Mumia Home, was part of the November delegation. Speaking at the Dec. 6 rally, Bryant compared his experience as a Black man in Philadelphia confronting stop-and-frisk to the daily, repeated checkpoints to which every Palestinian is subject.

Students for Justice in Palestine’s call

In its protest call, SJP said, “Painting freedom, secular democracy and equality as an incitement to violence or even genocide is ahistorical and an argument made in bad faith. Dr. Hill’s statements … cannot be classified as ‘hate speech’ against Jewish people. We reject the sentiment that anti-Zionism is equivalent to anti-Semitism, because denouncing a settler-colonialist, white supremacist state does not make one anti-Semitic.”

Their statement continued, “Because we recognize that the Zionist entity is an apartheid state, we know that genuine democracy does not — cannot — exist in Israel. We know that the imperialist Western powers have manufactured an artificial idea of peace and democracy in order to pursue profit at the expense of colonized peoples. Finally, we know that to advocate for a free Palestine is to advocate for freedom from apartheid, for liberation from siege, for basic access to water and safety for ALL people living in Palestine.”

The students demand that Temple University rescind their unprofessional, inappropriate and anti-academic statement conflating Dr. Hill’s words with “hate speech” and that Temple pledge support for courses and open discussion about Palestine on campus.

As the rally ended at North Broad and Cecil B. Moore, several speakers connected the attack against Hill with other efforts to silence Black voices, including the voice of journalist and political prisoner Mumia Abu-Jamal.  Pam Africa, just returning from a visit with Abu-Jamal, spoke on the need for solidarity between prisoners in Palestine and those in the U.S. and shared Abu-Jamal’s message of solidarity with the student demonstrators.