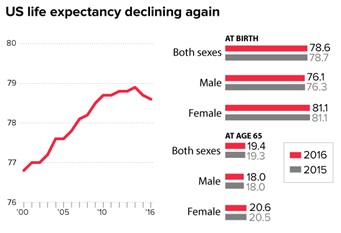 The Centers for Disease Control and Prevention (CDC) released its latest numbers for life expectancy in the U.S. on Nov. 28, and the news reveals a disturbing pattern. Few researchers were surprised that U.S. average life expectancy slipped another tenth of a year to reach 78.6 years. This indicates that drug overdoses, suicides and other preventable or treatable conditions have continued to grow. (tinyurl.com/y9g3kawy)

Indeed, if not for scientific and technological advancements in treating heart disease, cancer and cigarette addiction, life expectancy would be even lower. As the economic situation in the United States continues to deteriorate, so will people’s prospects for living happy, healthy and long lives, no matter the advanced treatments offered in private hospitals with the best health care services.

It’s worth noting where these numbers emerge from and how they are used. In certain parts of the United States, life expectancy is quite high. Wealthier, mainly white families can afford access to both quality health care and healthy environments. They have access to better food, cleaner water, gyms, yoga studios and personal trainers. They can afford access to psychiatrists and detox facilities. They can afford good lawyers to make sure their children get detox and rehab and not jail time.

In other parts of the country, such as rural areas, non-white-majority urban areas, Indigenous reservations, prisons and generally impoverished areas, the situation is the opposite. Racism and class war have resulted in a disproportionate body count in these parts of the country. People struggle for access to everything that keeps them healthy and happy. Their jobs are more dangerous, more scarce and paid with poverty wages. Because of their race, gender or class, they do not have access to health care or healthy environments.

Life expectancy doesn’t necessarily mean that people will start dying at 78.6 years of age. Rather, it’s an assessment of how likely a person is able to survive events such as infancy and childhood, giving birth, illness, crime and accidents. Some older people will live into their second century thanks to advances in medical science and health care, but most of them will survive so long because they can afford to.

The poor and oppressed are left to die from preventable conditions. This is why Black women are more than twice as likely to die from childbirth in the United States. This is why life expectancy for Black men is 71.5 years (tinyurl.com/ybto9ax8), and for Indigenous Lakota people on the Pine Ridge and Cheyenne River reservations it’s a staggering 50 years! (tinyurl.com/y9dyp6gl)

The U.S. spends more per capita on health care than any other country globally, but this money mainly circulates among insurance companies, big pharma and lobbying firms to increase their profits. The same amount of money spent on the poor or on universal health care would bankrupt Wall Street, but increase life expectancy across all sectors.

In countries that have universal, free health care, life expectancy rates are much higher, such as in Canada (82.3 years) and the United Kingdom (80.9 years), but even they are stalling. In the UK, life expectancy has stopped growing altogether. (tinyurl.com/y9asft2u) This is a result of austerity eating away at working-class gains. Housing has become increasingly tenuous, and rough sleepers are filling doorways, decreasing their quality of life.

While people in capitalist countries continue to suffer and decline, in socialist countries like Cuba, life expectancy not only grows, but grows evenly across all communities. Recent innovations there in cancer vaccines mean hope for people suffering from lung and skin cancers. Cuban treatment for gender dysphoria for trans and gender nonconforming people is both groundbreaking and lifesaving.

Cuba sends its doctors to work in underserved communities around the world and trains doctors free of charge from all over the world, including the U.S., if they are willing to use those skills back home in poor communities. It’s no surprise that Cuban life expectancy is higher than in the U.S. Despite the U.S. blockade and constant attacks on their sovereignty, Cubans born in 2018 can expect to live 79 years. (tinyurl.com/7q49mpl)

After the collapse of the Soviet Union and during the era of arch-clown and puppet Boris Yeltsin, life expectancy for formerly Soviet men fell an astonishing 9 years over the course of about a decade. (tinyurl.com/yamxveug) Mass privatization, widespread unemployment and the harrowing reality of what life is like in the “free” capitalist world drove millions to an early death by alcohol and suicide. But despite the restoration of capitalism in Russia, there is a rising life expectancy rate of Russia under Vladimir Putin.

Global warming and the increasing inability for capital to find the profit it needs to sustain itself are time bombs that will need to be defused before they explode. Racism, sexism, homophobia and xenophobia are the tools used to control and terrorize the people, but they cannot save capitalism.

The CDC’s report isn’t widespread news to most people suffering under capitalism and U.S. imperialism. It’s just a somber affirmation of what a growing number of workers and oppressed peoples, especially young people, already know — we must abolish a for-profit system which seeks to kill us and emulate that which gives life.