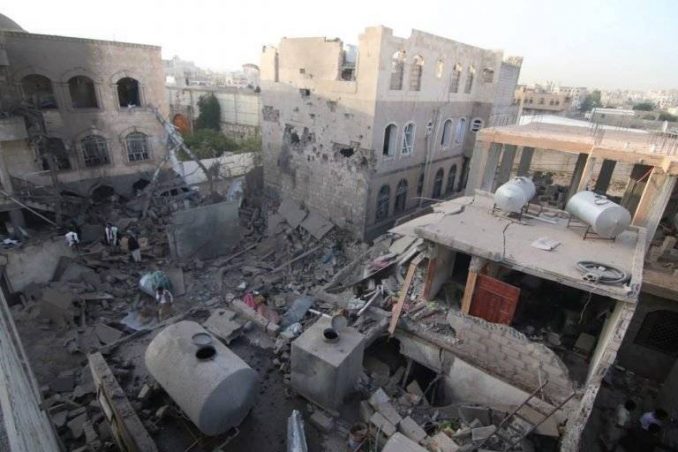 A home in Sana’a destroyed by Saudi airstrike, killing an entire family, July 2017.

Editor’s note: Since 2015 the Pentagon has provided refueling for Saudi planes that kill Yemeni civilians and fighters. It has also provided satellite information on what to target and “elite U.S. forces” to work with the Saudis. (Wall Street Journal, June 12) The immense humanitarian disaster this caused has brought criticism of the U.S. role. This Nov. 11, the Saudi-led coalition of Gulf monarchies — upon hearing that the U.S. would stop the refueling — has said the coalition will do it themselves.

This is just the latest sign of problems between Washington and Riyad. Others include a scandal over the assassination of Jamal Khashoggi, a Washington Post journalist and Saudi citizen killed Oct. 2 in the Saudi Embassy in Istanbul, which has been condemned by the Turkish government. The U.S. and Saudi Arabia still collaborate on economic and military maneuvers aimed against Iran.

The article below, which first appeared in the Nov. 7 edition of the progressive German publication Junge Welt, gives more detail on the suffering Riyad continues to impose on the Yemeni people. Translation is by WW Managing Editor John Catalinotto.

Nov. 7 — This week, as before, the war in Yemen is not on the agenda of the U.N. Security Council. At the internet portal Relief Web, an information service of the United Nations Office for the Coordination of Humanitarian Affairs (OCHA), the war-torn country only makes it to sixth place on the “hit list” of international crises and disasters.

According to UNICEF Regional Director Geert Cappelaere, Yemen is a “hell for children.” At a press conference of the U.N. Children’s Fund in Amman last Sunday, Cappelaere recalled the 7-year-old girl Amal Hussein, to whom the New York Times had previously dedicated a cover story. Amal died of malnutrition on Nov. 1.

In the last days before her death, the child had been fed in an infirmary, but could no longer keep down any food. To make room for other patients, Amal was discharged from the clinic and her parents were advised to take her to an aid organization 15 kilometers away. But the parents brought the child home to a straw hut in a refugee camp. They had no money for the trip.

Every year 30,000 children die because they do not get enough to eat; due to malnutrition they are also susceptible to diseases, said Cappelaere. There is not just one Amal in Yemen, “there are many thousands.”

In Yemen, 1.8 million children suffer acute malnutrition and 400,000 face death daily. Forty percent of them live in the province of Hodeida and in neighbouring regions, where the war is raging at its worst. According to the UNICEF coordinator, only one hospital is still in operation there. The Al-Thawra hospital is less than two kilometers (1.24 miles) from the front.

The city of Hodeida, in the west of the country on the Red Sea, is the only port for bringing relief supplies to Yemen. According to Cappelaere, up to 80 percent of the Yemeni population of around 25 million depend on this port. An attack on Hodeida, as planned for a long time by the Saudi-led war alliance, would stop all aid deliveries to the country’s war zones.

Not only are the children suffering. Eight million people are dependent on emergency aid, according to the U.N. emergency aid program OCHA. This figure could quickly rise to 14 million if the war is not stopped soon. But a ceasefire would not be enough — Yemen would need a comprehensive aid program for reconstruction.

People weakened by hunger also lack health care, sanitation and clean water. Since 2016, the number of cholera cases in Yemen has increased dramatically.

According to OCHA, 3 million internally displaced people live mostly in poorly equipped camps. According to the U.N. refugee agency UNHCR, some 900,000 people have returned to their original homes despite being damaged or destroyed and uninhabitable.

Yemen is regarded as the poorhouse of the Arab world. Hunger has been part of everyday life for decades, especially for the rural areas, which are home to around 80 percent of the population.

Since 1990, the country has been at the lower end of the Human Development Index. The HDI assesses three central achievements of human existence: a long, healthy life; access to education; and a good standard of living. In the United Nations Report on Poverty, at the botto of the list are Yemen and African states. More than 20 percent of those under 25 years of age can neither read nor write, and more than 60 percent of the population live below the poverty line.

Around 10,000 people have been killed since the beginning of the war in 2015 and around 40,000 injured. Attacks by the Saudi war alliance have repeatedly bombed civilian assemblies such as weddings, funerals, school trips and markets. Dozens of people — all civilians — were often killed on the spot.