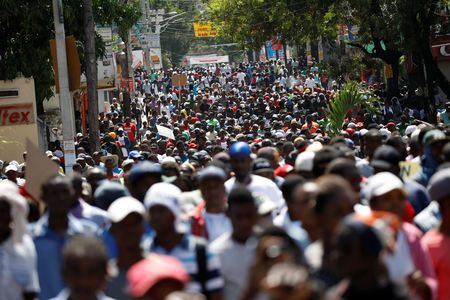 Three million Haitians throughout their country of 11 million hit the streets Oct. 17 to protest the government’s corruption and its waste of billions of dollars of aid from Venezuela.

Cops broke up these protests by firing into the crowds and using massive amounts of tear gas.  People in the streets responded by throwing rocks, building barricades of burning tires and running but not dispersing until they made their political points over poverty wages and government corruption.

On Oct. 31, a funeral was held in Port-au-Prince for seven mostly young protesters killed by the cops: Jean Kenson Rosier, Dieubéni Casimir, Francky Duval, Junelson Pierre, Jhonny Mervil, Christelle Alexandre and Mercidieu Baptiste. The cops attacked mourners gathered outside the church of Our Lady of Perpetual Help with tear gas and ammunition.

When the funeral service restarted, attendees learned that cops had killed two mourners outside the church.  The crowd grew so angry that they decided to take the caskets and march to the Champ de Mars, the site of the presidential palace which was destroyed in the 2010 earthquake.

People blocked streets and set up burning barricades. It took the cops hours to disperse the protest, which disrupted Port-au-Prince for much of the day. During these protests nine people were shot and wound up in the hospital, according to André Michel of the Democratic and Popular Sector.

‘We’ll mobilize in the whole country and the diaspora’

Millions of Haitians have taken to the streets, but with little coverage in the press or even YouTube about exactly why they have come out so massively and militantly and how they feel about the current situation.

The progressive Haitian newspaper Haïti-Liberté published a statement Nov. 7 from the assembly of mass organizations. Here are some excerpts:

“The Assembly of Political, Labor Union, and Popular Organizations denounces with all its strength that the Haitian government has sent police bandits to carry out repressive acts against the people. We recall that on Oct. 17, 2018, about three million people nationwide took to the streets to demand the departure of the group in power along with the arrest of the thieves of the PetroCaribe fund.

“Before Oct. 17, President Jovenel Moïse visited several police stations to encourage police officers to repress the population. And just as the indicted president wanted, during the Oct. 17 mobilization, police assassins fired on the people in several departments. More than seven demonstrators died and more than 50 compatriots were wounded by the bullets of police bandits.

“Once again, during the funeral of our compatriots in Belair, the police’s criminal mercenaries struck again. Several comrades were injured by gunshots and tear-gas. The criminals didn’t even spare people inside the church from tear-gas. Even the priest who was presiding over the funeral had to leave the church to escape from the gas.

“While saluting the courage of our compatriots who took the lead, the Assembly of Political, Labor Union, and Popular Organizations condemns with all its might the repression carried out by Jovenel Moïse and the CSPN [High Council of the National Police] by sending police criminals against demonstrators. In this sense, we call on the victims to take to court the indicted Jovenel Moïse and the entire CSPN.

“This repressive and anti-democratic conduct shows clearly that the Tèt Kale snake is far from dead …  The remedy to the Tèt Kale snake is constant mobilization [Tèt Kale political party heads Haiti’s government. — GD]. These repressive acts don’t scare us. We’ll continue mobilizing everywhere in the country and overseas to crush the head of the snake and achieve the arrest and judgment of all the thieves who stole PetroCaribe funds.

“That’s why on Nov. 2, we’ll warm up with a Petro Gede mobilization. On Nov. 18, we’ll mobilize in the four corners of the country and in the diaspora. On Nov. 19 and 20, there will be a PetroBlockage, the country will be brought to a standstill, until this ends.”

Gede is the Voodoo day of the dead, corresponding to Halloween.