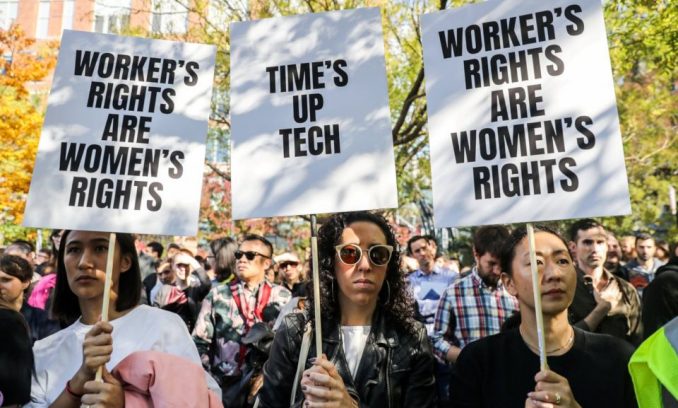 Google workers in New York walked out Nov. 1 in their moment in a historic global strike.

Google employees walked out around the globe on Nov. 1 to demand an end to sexual misconduct at the multibillion-dollar technology corporation. In total, 20,000 workers demonstrated in cities in the U.S. and Canada, Europe and Asia. This coordinated job action was the first international protest against workplace sexual misconduct — and a show of solidarity with those who had experienced abuse. Also protested were gender pay inequity and systemic racism.

The groundbreaking protest was effectively a rolling strike, lasting nearly a day. Workers first walked off the job in Tokyo at 11:10 a.m., and then at exactly the same time in each time zone, in Singapore, followed by European cities, including Berlin, Zurich, London and Dublin. The work stoppage then spread to many Canadian and U.S. cities.

“Workers’ rights are women’s rights!” read a popular sign slogan at the New York City rally of 3,000 women and their allies. There, Demma Rodriguez, a leader of Black Googler Network, stressed that when Google “wasn’t a place for equality for women, minorities and people with disabilities, ‘that means the company is failing everyone. I am fed up! … We will bring the consequences.’” (New York Times, Nov. 2)

Hundreds of workers in San Francisco stated: “We can’t take it. Equal pay now!” and “Time’s up on sexual harassment! Time’s up on abuse of power, time’s up on systemic racism!” Outside Googleplex, company headquarters in Mountain View, Calif., workers told of Human Resources officials protecting sexual harassers and mistreating those who complained. There, thousands marched and chanted, “Stand up! Fight back!”

Clearly, the Google strikers were inspired by the #Me Too Movement, and like the McDonald’s workers before them, they took this bold action without the benefit of union protection. Moreover, this work stoppage was inspired by working-class struggles — past and present.

Amr Gaber, a walkout organizer, posted on Twitter: “Google employees borrowed tactics from historical labor organizing. … [T]he protests’ leading organizers linked themselves to movements like the teachers’ strike in West Virginia and the ‘Fight for $15’ demonstrations by fast food workers.

“Indeed, the San Francisco demonstration was even held in Harry Bridges Plaza [named for the late militant founder of the International Longshore and Warehouse Union]. Speakers spoke of his and other examples of historical labor organizing. Demonstrators [there] also talked about the simultaneous union strikes by Marriott employees,” wrote Gaber.

This job action opposed the scourge of gender inequity and abuse throughout Silicon Valley and beyond. This new movement, based on workplace action, is attempting to strike a blow at the very corporate culture that enables sexual misconduct.

Silicon Valley workers have become disgusted with the misogyny, racial inequality, anti-LGBTQ bigotry and elitism within the technology industry. It is notorious for its lack of workplace diversity and its tolerance of sexual misconduct.

At Google, the catalyst for the strike was the Oct. 25 New York Times revelation about a secret severance package of $90 million given to Andy Rubin, Android software creator, despite the company finding credible a sexual harassment claim against him. Two other executives accused of sexual misconduct were given substantial exit packages. A third was kept in a highly paid position.

The Rubin story sparked an immediate outcry. At a staff meeting, Google workers objected to the corporation’s mishandling of sexual misconduct claims, and the next day called for a walkout on Nov. 1. Protest information was posted on Twitter at #GoogleWalkout, and it spread like wildfire. Thousands of workers instantly responded. Some actions were organized in one day! What began as a “women’s walkout” quickly became a multigendered movement.

In New York magazine dated Nov. 1, the seven initiators of the Google walkout — Claire Stapleton, Tanuja Gupta, Meredith Whittaker, Celie O’Neill-Hart, Stephanie Parker, Erica Ander and Gaber — told of thousands of incidents of sexual misconduct throughout the company for years. Brimming with exasperation, they declared: “No one is going to do it for us. We are here standing together, protecting and supporting each other. We demand an end to the sexual harassment, discrimination and the systemic racism that fuel this destructive culture.”

Organizers thanked the McDonald’s workers who struck against sexual abuse and the thousands of women in the year-old #Me Too Movement who emboldened them by publicizing their stories of mistreatment. (The Time’s Up organization, an outgrowth of that movement, backed the Google strikers.)

The core group broadened the walkout demands to cover pay equity, an end to racist and gender bias, and protections for “gig” workers not covered by labor laws. They called for an end to forced arbitration in cases of harassment and discrimination; a commitment to end pay and opportunity inequity, with a commitment to have women of color at every company level; and accessible data on gender, race and ethnicity compensation gaps, promotion rates and job advancement opportunities.

The initiators insisted that executives make public reports on sexual harassment complaints and their outcomes, and establish a global, safe, anonymous process for employees to register sexual harassment complaints. This would be accessible to all full-time workers and gig workers such as temporary employees, vendors and contractors. Finally, they called for an employee representative on the company board and a chief diversity officer who speaks directly to the board.

On the question of diversity, although Google claims to have “an open and inclusive environment,” the facts say otherwise. The June 15 Washington Post reported that Google’s global workforce is 69 percent male, with only 20 percent of tech jobs held by women. In the U.S., Black workers comprise only 2.5 percent of the workforce, while Latinx employees are 3.6 percent. The company has been sued for systemic gender pay inequity. Pro-diversity advocates have been harassed both on and off social media.

Irene Knapp, software engineer and protester, explained that the high pay and perks are meant “to make people feel special for working here and like normal working conditions don’t apply. But … Google is a large corporation and it treats its staff badly in certain ways in certain situations.” (wired.com, Nov. 1)

This isn’t the first protest at Google. The activist workforce has also opposed racism and pro-war policies. In April, 3,000 employees denounced the company’s contract with the Pentagon to develop technology to better identify human targets for drone killings. A dozen engineers resigned. The company backed down.

Misogyny, abuse and the class struggle

Through the #Me Too Movement, women thought that, by publicizing their stories, major changes would occur. Companies would root out their culture of misogyny, gender inequity and sexual harassment. That movement did make advances by breaking the silence and the denial surrounding these issues and showed this aspect of women’s oppression exists throughout every sphere of U.S. society.

Actors told their stories. Young athletes publicly denounced sexual abuse they experienced. Farmworkers and service workers spoke out. All of these courageous people deserve recognition and appreciation. Even though this movement has shaken things up, many companies resist change and retain backward practices, allowing inequality, discrimination, harassment and abuse to continue.

This struggle takes place within capitalist society, in which misogyny, racism and bigotry against im/migrants and LGBTQ individuals are entrenched. The capitalist class enforces oppression and inequality — and promotes backward ideologies to keep the multinational, multigender and multigenerational working class divided. The bosses and their political representatives always aim to stop people’s movements. However, building a united fightback of workers and allies is essential to holding on to basic rights and making gains.

The workers have tools with which to fight back. History has shown that their ability to withhold their labor power is a strong weapon. The bosses are well aware of this. The many strikes and job actions that have taken place throughout the U.S. — and the world — show that workers can make progress by using this tactic to improve workplace conditions, push the bosses back and challenge their oppression.

The heroic McDonald’s workers, led by Black and Latinx women, im/migrants and LGBTQ people, held a one-day, 10-city strike against workplace sexual abuse on Sept. 18. They showed the way forward for other workers not only in the service sector, but in other industries as well.

Women and gender and sexually oppressed people are workers. When they assert their power and fight back together against the bosses, as part of the multinational, multigendered and multigenerational working class, they advance their struggles and those of all workers.

Sue Davis and Martha Grevatt contributed to this article.