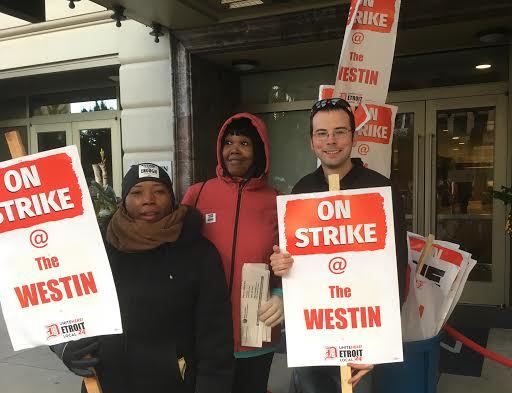 Striking hotel workers in Detroit were staying strong on Oct. 29 – they remained on the picket line 24 hours a day for a month for the win.

After almost a month of 24-hour pickets at the swank Westin Book Cadillac hotel in downtown Detroit, UNITE HERE Local 24 has reached a settlement with the Marriott-owned hotel. While details have not been made public, a union news release indicated that its concerns about wages, healthcare costs and working conditions have been addressed.

Workers on the line were jubilant when they got the news Nov. 3. The victory came shortly after the news media acknowledged what Local 24 had been saying for weeks: The hotel’s vacancy rate, normally around 10 percent, had risen to 60 or 70 percent as a result of the strike. Even then supervisors and the few workers who scabbed could not keep up with basic housekeeping.

One of the chants on the noisy lines, where a drumbeat was constant during the hours the city allowed it, was “Dirty rooms! Dirty sheets! Take your business down the street!” Some notables did just that, including the Toronto Maple Leafs hockey team and pop superstar Elton John.

After the 160 housekeepers, cooks and other workers walked off the job, a constant stream of supporters stopped by to walk the line with them. The strike shut down the hotel’s Starbucks store, so a sign offered an alternative: Have coffee with the strikers.

Congratulatory tweets have been arriving, including from other UNITE HERE locals that are still striking Marriott around the country. Two days before the victory, leaders of the worldwide walkout at Google tweeted solidarity.

Local 24 tweeted: “Union workers at the Westin Book Cadillac proved that even in a right-to-work state, when working people stand in solidarity, we win.”