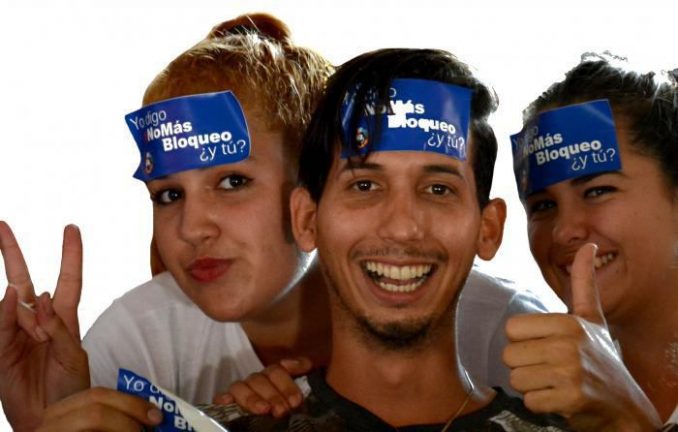 The world said “No!” on Nov. 1 to the U.S. economic, financial and commercial blockade of Cuba. In the United Nations General Assembly, the final tally was 189 to 2 approving a resolution introduced by Cuba that denounces the unilateral, extraterritorial stranglehold imposed by the U.S. on its Caribbean neighbor. In this 27th U.N. vote on such a resolution, only the U.S. and Israel voted against it.

Cuba’s Foreign Minister Bruno Rodriguez Parrilla introduced his country’s resolution by documenting four examples of Cuban children who could not get the optimum medication they needed because of the U.S. blockade.

Although these children did survive, Rodriguez Parilla reported, “In 2017, 224 people per 100,000 inhabitants died in Cuba without these treatments due to the blockade.” He added, “In the last year, more than 30 U.S. companies, such as Agilent, Cook Medical and Thermo Fisher Scientific, refused to sell Medicuba medicines, supplies and equipment essential to our health system or did not respond to repeated requests.”

Rodriguez Parilla pointed out the blockade qualifies as an act of genocide under the 1948 Convention on the Prevention and Punishment of the Crime of Genocide. These facts may be a surprise to U.S. travelers enjoying direct flights from U.S. airports to many Cuban destinations on numerous airlines. But the blockade is real for Cubans who experience the human damage and suffering behind the headlines.

In Rodriguez Parilla’s stressed in his remarks to the Assembly: “The objective of the blockade, anchored in the Cold War, has not changed over time.

“The infamous classified memo of Deputy Secretary of State Lester Mallory of April 6, 1960, guides the policy of the current U.S. government toward Cuba when [Mallory] writes: ‘There is no effective political opposition [to Fidel Castro and the Cuban government]. The only foreseeable means of alienating internal support is through disenchantment and disaffection based on economic dissatisfaction and hardship. … [Every] possible means to should be undertaken to weaken the economic life of Cuba … [by] denying Cuba money and supplies.’ ” (tinyurl.com/h6tm8e5) 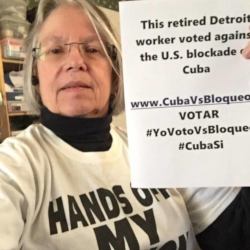 Human rights? Look at the record

A linchpin of the aggressive U.S. turn is to falsely accuse Cuba of human rights violations. Remember that in the U.S., profiteering corporations are afforded the same rights as humans!

Cuba’s internal and international record for human development is well known, as it leads the region in education and health outcomes. Cuba has lower infant mortality and fewer maternal deaths than the U.S.; the latter is actually increasing, particularly among Black women.

Cuba’s Latin American School of Medicine produces new doctors who return to their homelands to practice. Cuba’s Yo Si Puedo literacy program teaches people around the world to read and write, liberating them to learn and decide their own futures.

Rodriguez Parrilla said, “The government of the United States does not have the slightest moral authority to criticize Cuba or anyone else in the field of human rights. We reject the repeated manipulation of human rights for political ends, and the double standards that characterize it.

“The United States is party to only 30 percent of human rights instruments and does not recognize the right to life, nor to peace, nor to development, nor to security, nor to food, nor does it recognize the rights of children. No one can be surprised that you have left the [U.N.] Human Rights Council,” he said, addressing the U.S. Ambassador to the U.N.

Rodriguez Parrilla cited historic U.S. crimes like the only use of nuclear weapons against civilian populations, the militarization of cyberspace and outer space, the establishment of military dictatorships and the engineering of bloody coups d’etat in other countries, leading to countless deaths and waves of refugees. He pointed out the extrajudicial executions, kidnapping and torture in the prison at the U.S. Naval Station Guantanamo Bay, which illegally occupies Cuban territory.

He extensively described U.S. human rights violations against the people of the U.S., “especially African-Americans and Hispanics, minorities, refugees and migrants. … Equal opportunity in the United States is a chimera. The government that you are part of is a government of millionaires that imposes savage policies.” (The full statement in Spanish is at tinyurl.com/ycx36deb.)

On the same day as the U.N. vote, U.S. National Security Advisor John Bolton further ramped up aggression against Cuba, Venezuela and Nicaragua, characterizing them as the “troika of tyranny.” Simultaneously, he welcomed the Oct. 28 election of Brazil’s next president who is the racist, homophobic, anti-woman, anti-worker Jair Bolsonaro. Bolton called Bolsonaro a “like-minded” partner. (tinyurl.com/yc7exly4)

Bolton has a long reactionary history. He was a senior Justice Department official in meetings that managed the Iran-Contra scandal in 1986 by funding the illegal U.S. war against the Sandinistas in Nicaragua. (tinyurl.com/ybozokqx) As U.S. Under-Secretary of State for Arms Control in the George W. Bush administration, Bolton helped mount a disastrously destructive U.S. war by falsely claiming that Iraq maintained weapons of mass destruction. (tinyurl.com/qpbyo) During the same period, Bolton falsely accused Cuba of developing a biological weapons threat to the U.S. (tinyurl.com/yd874pt5) Currently, Bolton also supports aggression against Iran and the Democratic People’s Republic of Korea. (tinyurl.com/ychkd6da)

On Oct. 31, the day the debate began in the U.N. General Assembly, Cuban television featured a live TV broadcast from the José Antonio Echeverría University of Technology. According to Granma International, the university was headquarters for a nationwide beehive of activities at universities and secondary schools denouncing the U.S. blockade. The broadcast could also be viewed on Facebook, along with live Cuban reporting from the United Nations.