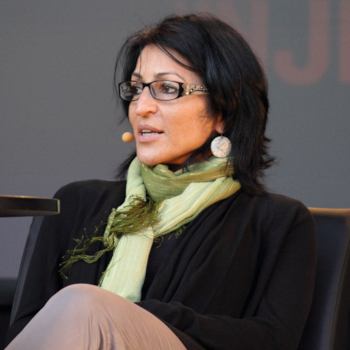 This is a slightly edited version of Susan Abulhawa’s “Statement to Kalimat Palestinian Literature Festival” of Nov. 3.

As you all know by now, Israeli authorities have denied me entry into my country and I am therefore unable to attend the festival. … It pains me that we can meet anywhere in the world except in Palestine, the place to which we belong, from whence our stories emerge and where all our turns eventually lead. We cannot meet on soil that has been fertilized for millennia by the bodies of our ancestors and watered by the tears and blood of Palestine’s sons and daughters who daily fight for her.

Since my deportation, I read that Israeli authorities indicated that I was required to “coordinate” my travel with them in advance. This is a lie. … Then, they said my first deportation in 2015 was because I refused to give them the reason for my visit. This, too, is a lie. Here are the facts:

In 2015, I traveled to Palestine to build playgrounds in several villages and to hold opening ceremonies at playgrounds we had already built in the months previous. Another member of our organization was traveling with me. She happened to be Jewish and they allowed her in. Several Israeli interrogators asked me the same questions in different ways over the course of approximately 7.5 hours. I answered them all, as Palestinians must if we are to stand a chance of going home, even as visitors. But I was not sufficiently deferential, nor was I capable of that in the moment. But I was certainly composed and — the requirement for all violated people — “civil.”

Finally, I was accused of not cooperating because I did not know how many cousins I have and what are all their names and the names of their spouses. It was only after being told that I was denied entry that I raised my voice and refused to leave quietly. I did yell, and I stand by everything I yelled. According to Haaretz, Israel said I “behaved angrily, crudely and vulgarly” in 2015 at the Allenby Bridge.

What I said in 2015 to my interrogators, and which was also reported in Haaretz at the time, is that they should be the ones to leave, not me; that I am a daughter of this land and nothing will change that; that my own direct history is steeped in the land and there’s no way they can extricate it; that as much as they invoke Zionist mythological fairy tales, they can never claim such personal familial lineage, much as they wish they could.

I suppose that must sound vulgar to Zionist ears. To be confronted with the authenticity of Palestinian indigeneity despite exile, and face their apocryphal, ever-shifting colonial narratives.

My lack of deference in 2015 and choice not to quietly accept the arbitrary decision of an illegitimate gatekeeper to my country apparently got appended to my name and, upon my arrival this time on November 1, signaled for my immediate deportation.

The true vulgarity is that several million Europeans and other foreigners live in Palestine now while the Indigenous population lives either in exile or under the cruel boots of Israeli occupation; the true vulgarity is in the rows of snipers surrounding Gaza, taking careful aim and shooting human beings with no real way to defend themselves, who dare to protest their collective imprisonment and imposed misery; the true vulgarity is in seeing our youth bleed on the ground, waste in Israeli jails, starve for an education, travel, learning, or some opportunity to fully be in the world; the true vulgarity is the way they have taken and continue to take everything from us, how they have carved out our hearts, stolen our everything, occupied our history, and tamp our voices and our art.

In total, Israel detained me for approximately 32 hours. We were not allowed any electronics, pens or pencils in the jail cells, but I found a way to take both — because we Palestinians are resourceful, smart, and we find our way to freedom and dignity by any means we can. I have photos and video from inside that terrible detention center, which I took with a second phone hidden on my body, and I left for them a few messages on the walls by the dirty bed I had to lay on. I suppose they will find it vulgar to read: “Free Palestine,” “Israel is an Apartheid State,” or “Susan Abulhawa was here and smuggled this pencil into her prison cell.”

But the most memorable parts of this ordeal were the books. I had two books in my carry-on when I arrived at the jail and I was allowed to keep them. I alternated reading from each, sleeping, thinking.

The first book was a highly researched text by historian Nur Masalha, “Palestine: A Four Thousand Year History.” I was scheduled to interview Nur on stage about his epic audit of Palestinian millennia-old history, told not from the politically motivated narratives, but from archeological and other forensic narratives. It is a people’s history, spanning the untidy and multilayered identities of Palestine’s Indigenous populations from the Bronze Age until today. In an Israeli detention cell, with five other women — all of them Eastern European, and each of them in her own private pain — the chapters of Nur Masalha’s book took me through Palestine’s pluralistic, multicultural and multireligious past, distorted and essentialized by modern inventions of an ancient past.

The bitter irony of our condition was not lost on me. I, a daughter of the land, of a family rooted at least 900 years in the land, and who spent much of her childhood in Jerusalem, was being deported from her homeland by the sons and daughters of recent arrivals, who came to Palestine mere decades ago with European-born ethos of racial Darwinism, invoking biblical fairy tales and divinely ordained entitlement.

It occurred to me, too, that all Palestinians — regardless of our conditions, ideologies, or the places of our imprisonment or exile — are forever bound together in a common history that begins with us and travels to the ancient past to one place on earth, like the many leaves and branches of a tree that lead to one trunk. And we are also bound together by the collective pain of watching people from all over the world colonize not only the physical space of our existence, but the spiritual, familial and cultural arenas of our existence. I think we also find power in this unending, unhealed wound. We write our stories from it. Sing our songs and dabke there, too. We make art from these aches. We pick up rifles and pens, cameras and paint brushes in this space, throw stones, fly kites and flash victory and power fists there.

The other book I read was Colson Whitehead’s acclaimed, spellbinding novel, “The Underground Railroad.” It is the story of Cora, a girl born into slavery … [who] escapes the plantation with her friend Caesar, their determined slave catcher Ridgeway on their trail in the Underground Railroad — a real-life metaphor made into an actual railroad in the novel. The generational trauma of inconceivable bondage is all the more devastating in this novel because it is told matter-of-factly from the vantage of the enslaved. Another people’s collective unhealed wound laid bare, an excruciatingly powerful common past, a place of their power too, a source of their stories and their songs.

I am back in my house now, with my daughter and our beloved dogs and cats, but my heart doesn’t ever leave Palestine. So, I am there, and we will continue to meet each other in the landscapes of our literature, art, cuisine and all the riches of our shared culture.

After writing this statement, I learned that the press conference is being held at Dar el Tifl. I lived the best years of my childhood there, despite my separation from family and the sometimes difficult conditions we faced living under Israeli occupation. Dar el Tifl is the legacy of one of the most admirable women I have ever known: Sitt Hind el Husseini. She saved me in more ways than I suppose she knew, or that I understood at the time. She saved a lot of us girls. She gathered us from all the broken bits of Palestine. She gave us food and shelter, educated and believed in us, and in turn made us believe we were worthy. There is no more appropriate place than Dar el Tift to read this statement.

I want to leave you with one more thought I had in that jail cell, and it is this: Israel is spiritually, emotionally and culturally small despite the large guns they point at us — or perhaps precisely because of them. It is to their own detriment that they cannot accept our presence in our homeland, because our humanity remains intact and our art is beautiful and life affirming, and we aren’t going anywhere but home.