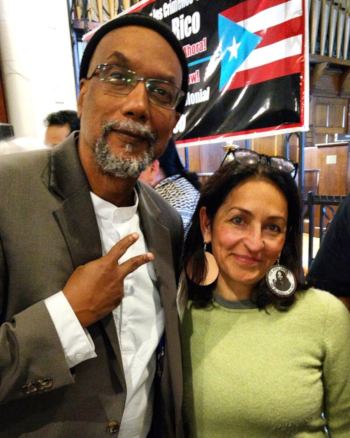 Ajamu Baraka of the Black Alliance for Peace with Susan Abulhawa. Both were jurors at the International Tribunal on US Colonial Crimes in Puerto Rico on Oct. 27.

An Israeli judge ordered the deportation of Palestinian novelist Susan Abulhawa after security forces held her for over 36 hours. Border security detained Abulhawa in the Tel Aviv early on Nov. 1, when she arrived to attend the Kalimat Palestinian Literature Festival, where she was scheduled to speak in both Jerusalem (Al-Quds) and Ramallah.

Learning of her detention, over 2,500 people signed a petition in a matter of hours demanding her immediate release. Despite protest from festival organizers and from supporters worldwide, the Israeli court denied Abulhawa’s appeal. A prison van took her to the Tel Aviv airport and placed her on a flight back to the United States on Nov. 2.

Abulhawa is author of the critically acclaimed, bestselling novel, “Mornings in Jenin.” This was the second time in three years that she was detained and deported while trying to enter the land of her birthright, Palestine. She currently resides in the Philadelphia area.

In 1967, the Israeli authorities forced Abulhawa’s parents from their home at gunpoint.

In a Nov. 3 statement, Abulhawa thanked the organizers of the literary festival for their efforts to secure her safe arrival in Palestine. She also provided a preliminary account of her treatment and the conditions in the Israeli detention facility:

“We were not allowed any electronics, pens or pencils in the jail cells, but I found a way to take both — because we Palestinians are resourceful, smart, and we find our way to freedom and dignity by any means we can. … I have photos and video from inside … and I left for them a few messages on the walls by the dirty bed I had to lay on. I suppose they will find it vulgar to read: ‘Free Palestine,’ ‘Israel is an Apartheid State,’ or ‘Susan Abulhawa was here and smuggled this pencil into her prison cell.’” (See Abulhawa’s account in the accompanying article.)

Israeli border forces are notorious for their capricious and racist treatment of both Palestinians and Africans who seek to cross the state’s heavily militarized border. In 2015, the Israeli Population and Immigration Authority claimed that Abulhawa did not answer soldiers’ questions to their satisfaction and barred her entry then. They claimed she was again denied entry because “she landed without arranging entry in advance.”

After the passage of sweeping new anti-immigration legislation in the Israeli parliament in March of last year, security forces are now empowered to block any supporter of the Boycott, Divestment and Sanctions movement. BDS was inspired and endorsed by the South African struggle against apartheid. Just last month, a U.S. student was barred entry to Israel where she had hoped to attend a university because she supported BDS on social media.

Wave of support for Abulhawa and Palestine

Workers World Party, along with the International Action Center, Jewish Voice for Peace, the U.S. Academic and Cultural Boycott of Israel, and several Black community activists in Philadelphia spearheaded the call for Abulhawa’s release. The call was also taken up by the recently concluded International Tribunal on U.S. Colonial Crimes in Puerto Rico, for which Susan Abulhawa served as a juror alongside the Rev. Luis Barrios, pastor of the Holyrood Church in the Bronx where the Tribunal was held; Ajamu Baraka of the Black Alliance for Peace; MOVE Minister of Confrontation Pam Africa; and ZoomInKorea editor Hyun Lee, among others.

The Philly Don’t Orchestrate Apartheid coalition initially circulated the petition. The coalition was formed to protest the Philadelphia Orchestra’s decision to tour Israel this past spring and give music lessons to Israeli soldiers amidst the ongoing massacre in Gaza.

Since March, Israeli snipers have shot thousands of Palestinians, mostly youths protesting at the Gaza border, killing 168. The Great March of Return protests are ongoing, as is the massacre of Palestinians at the hands of the Zionist state.

This collaboration with fascists comes as no surprise to those who recognize Israel as a settler-colonial state that has served Western imperialist interests in the region by attacking all progressive or sovereign forces there.

Abulhawa concluded her statement by stating: “Israel is spiritually, emotionally and culturally small despite the large guns they point at us — or perhaps precisely because of them. It is to their own detriment that they cannot accept our presence in our homeland, because our humanity remains intact and our art is beautiful and life-affirming, and we aren’t going anywhere but home.”

Workers World condemns the Israeli state’s treatment of Susan Abulhawa and welcomes her safe return to her family and comrades.