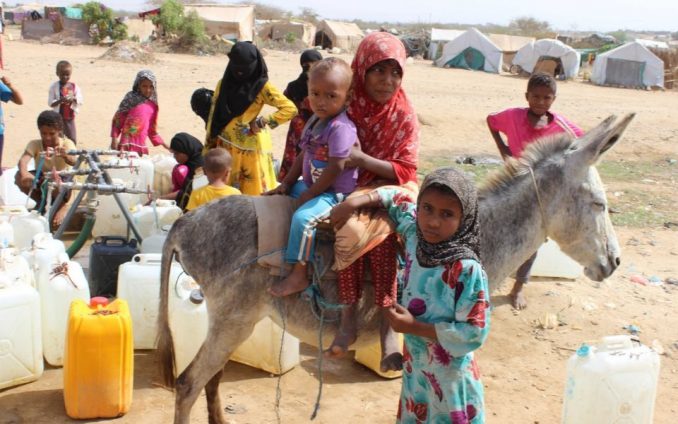 Famine is now killing more people in Yemen than combat in that country’s war of defense against U.S.-backed Saudi Arabia.

Some 13 million civilians among Yemen’s 29 million people face death by starvation, said Lise Grande, the United Nations coordinator for Yemen. The U.N. is close to calling the situation a famine. (Independent, Oct. 15) The Save the Children charity now estimates that 50,000 children under the age of five could die from malnutrition this year alone.

Located in the southwest corner of the Arabian peninsula, Yemen has a distinctive history of at least 2,800 years. The region was wealthy for centuries, producing frankincense and myrrh, but now Yemen is the poorest country in the Arab world. While it has substantial oil reserves, fighting in this country makes it impossible to produce oil profitably.

There is a civil war between the Ansar Allah movement, also known as Houthis, and the puppet regime Saudi Arabia reinstalled in power in 2015 after the Houthis drove them out. The United States supports the Saudi rulers, supplying the kingdom with the most advanced weapons, military and logistical supplies, target intelligence and recently some special operations forces.

While the puppet government appears to control most of the territory, the Houthis are in control of the major populated parts of the country.

The Saudis are conducting an extensive military air campaign against the Houthis, with big attacks on farming fields, fishing vessels, water facilities and transportation. These attacks destroy everything the Yemenis need to feed themselves, as well as targets like hospitals, schools — killing many civilians — and military facilities. The Saudi navy is blockading all the ports Yemenis use to get food.

Saudi Arabia’s brutal murder of Washington Post journalist Jamal Khashoggi in their embassy in Turkey on Oct. 2 has drawn worldwide media attention and condemnation, especially in the U.S. and Western Europe. Meanwhile, the genocidal Saudi war on Yemen has been relatively ignored.

For example, the Trump-hostile ­MSNBC network has devoted just one segment to Yemen. Meanwhile, MSNBC has aired over a dozen negative segments on Russian and Syrian government operations to “reconquer” Syria. (FAIR, March 1)

Current reasons for this famine in Yemen are financial. The puppet government controls the central bank. It has used this control over the economy to create runaway inflation. Higher prices have wiped out the people’s savings.

The puppet regime also pays no wages to government workers in areas the Houthis control. That includes doctors, nurses and teachers. About one-third of the jobs in Yemen are government funded.

That means that even where there is currently enough food in the markets, people can’t afford to buy it.

The Saudi royalty rule a feudal state structure sitting atop a capitalist economic system based on the sale of petroleum and dependent on arms suppliers in the U.S. and Western Europe. The stubborn resistance of the Houthis in the face of tremendous pressure make the Yemen puppet regime unstable, while Saudi war crimes make the suffering of the Yemeni masses unbearable.