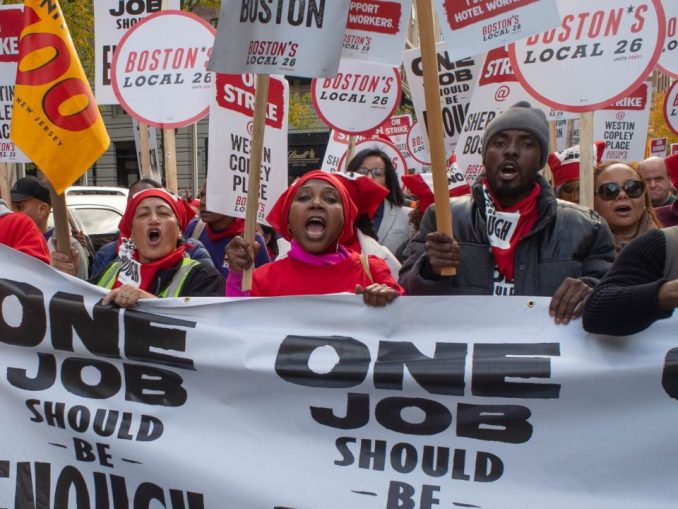 Workers of all ages, genders and nationalities poured into Boston’s Copley Square Oct. 20 for an inspiring rally and march, the largest yet in support of Boston hotel workers on strike against Marriott management.

Oct. 29 — Hundreds of striking hotel workers and thousands of supporters in Boston remain firmly united as they battle through their fourth week on the picket lines. The hotel workers, predominantly people of color and organized by UNITE HERE Local 26, unanimously voted to walk off the job Oct. 3, inspired by a Chicago hotel workers strike in September.

The backdrop for the Boston strike is a metropolitan area with skyrocketing rents and unmanageable living costs. Elders, students, migrants and people with longtime roots in the city’s neighborhoods can barely afford to live here anymore. Poor, working-class, Black, Latinx and immigrant people are being pushed out by racist gentrification, real estate development and venture capitalist speculation.

These strikers, coalescing under the slogan “One Job Should Be Enough,” have courageously called out Marriott — the giant hotel conglomerate — as well as its lawyers and scabbing wealthy hotel guests who refuse to back the strikers’ righteous demands for dignity, affordable health insurance and wages that would afford them the basic right to work 40 hours a week and survive without requiring a second or third job.

Many of these workers have been employed at downtown hotels for decades; yet they are willing to risk everything because they are fed up. Since going on strike, they have only become more fired up and militant in their demand for economic justice.

The workers have used the Major League Baseball playoffs and the World Series to turn up the volume on their demands. While in Boston for the divisional series in early October, the New York Yankees’ management booked their players into the Ritz-Carlton Boston, a Marriott-owned hotel. This essentially forced union players to cross a picket line. That helped galvanize support for the strike from Red Sox fans eager for opportunities to heap insult upon their arch-rivals. Working-class solidarity with the strike proved a welcome reason.

Strike representatives were able to convince the Houston Astros’ management to secure hotel rooms in a union-friendly venue during their visit to Boston for the American League Championship Series. However, travel coordinators for the Los Angeles Dodgers made the same “mistake” for games 1 and 2 of the World Series last week as did Yankees’ management. When Dodgers players crossed picket lines and checked into their hotel, it ignited hotel workers and Red Sox fans alike with a new sense of solidarity.

Brian Lang, president of UNITE HERE Local 26, reminded fans of both teams about the importance of being on the right side of history, embodied in Dodgers’ icon Jackie Robinson.

“The bottom line is workers out there, who are on their third week of striking, who live paycheck to paycheck, who are fighting for a livable income so one job would be enough. You’ve got millionaire ball players who would rather sleep in a hotel, even if it’s struck, because it has suites. I personally think that Jackie Robinson is rolling over in his grave right now. He’s an icon who that organization hails as a hero and they act completely differently than he would in this situation.” (sbnation.com, Oct. 26)

Local 26 also appealed directly to the the Major League Baseball Players Association, the union representing the players. The MLBPA then issued a statement in support of the strike and encouraged its players not to cross the picket lines.

What was not explained in the statement is the reality that it isn’t up to professional athletes where they stay during team travel. Hotel stays for teams are organized by baseball management at the direction of the office of the Major League Baseball Commissioner, who is really just a spokesperson for the owners of baseball teams. In other words, this was a conscious tactic by team owners to signal their class allegiance when it comes to labor disputes.

But with Teamsters drivers refusing to deliver to striking hotels out of solidarity, the hotels are also feeling the pressure of dwindling supplies. Local 26 has plans to turn up the heat with more pickets and more support by getting other unions involved in the struggle.

As of this writing, some 30 local politicians — including Boston city councilors and the mayor — have signed a letter to Marriott management urging negotiations for an end to the strike. This move by local politicians comes not because City Hall has any love for the workers being displaced by its development and gentrification projects. Instead this drive to re-open negotiations is merely a face-saving effort to stem class solidarity and prevent disruptions to tourism.

In contrast to the relentless racism and chauvinist rhetoric of hotel magnate President Donald Trump, and the growing far-right tide all over the world, workers and their supporters on the picket line have a great appreciation for the importance of protecting and caring for one another.

Speaking to Workers World, local labor activist Genevieve LeChat said of the strike, “The caravan [of refugees marching to the U.S. border from Honduras] is a good parallel for this: Workers who are struggling and facing displacement [are] sticking together. When the people of Mexico come out to greet them and leave food, it’s a lot like when workers join the picket line or cheer and honk on on their way to work. It breathes life into the struggle and helps [the strikers] keep marching.”