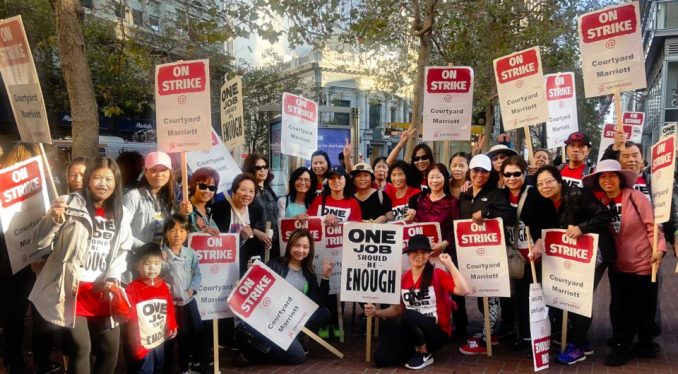 In eight U.S. cities and two in Canada, hotel workers are waging a militant strike against the Marriott hotel chain. Though Marriott is the largest and most profitable hotel chain in the world, its workers have united nationally around the slogan “one job should be enough.” This refers to the fact that many hotel workers must work two or more jobs to make ends meet. Cities affected by the strike are Boston, Detroit, Honolulu, Kauai; Oakland, San Diego, San Francisco, San Jose in California; and Toronto and Vancouver in Canada. Close to two dozen hotels are feeling the effects of the strike.

Striking hotel workers in San Francisco took to the streets Oct. 20 as part of the national strike. More than 1,000 hotel workers, led by UNITE HERE, plus their allies, marched past four San Francisco Marriotts, chanting and drumming. The strikers are now into their second week. Workers marched in seven other cities as well on Oct. 20.

In Detroit the Marriott-owned Westin Book Cadillac, the most profitable hotel in the city but with some of the lowest wages, has been targeted by UNITE HERE Local 24, which represents hospitality workers in Michigan and Ohio. Along with wages, working conditions are a big issue in the strike, which is entering its fourth week. Housekeepers are often forced to work during their breaks to keep up with the workload.

Members at the Westin Airport hotel also voted overwhelmingly to strike if contract demands are not met.

As the strike enters its fourth week, noisy, round-the-clock pickets continue. Rallies held Oct. 9 and Oct. 20 drew large crowds of supporters. The second rally was addressed by the leadership of the Michigan AFL-CIO, United Auto Workers, American Federation of Teachers and other labor leaders, along with clergy and elected officials. Even City Lab, a conference of business elites, felt the pressure not to cross the picket line and moved its event to another venue.

Shane Hoff contributed to this report.