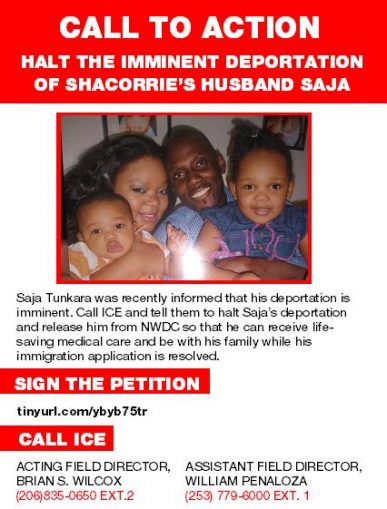 Tacoma, Wash. — It was “Free Saja” Day on Oct. 21 at the Northwest Detention Center as people rallied to stop Saja Tunkara’s threatened deportation and to support his immediate need for health care. Tunkara is from Sierra Leone. He and his partner, ShaCorrie Tunkara, have two children.

His partner told the rally that Tunkara had been scheduled for surgery to remove a tumor at a hospital when he was picked up and imprisoned last January. He was not let out for the scheduled surgery, and the detention center allowed him to suffer greatly for three months. The detention center’s so-called Immigrant and Customs Health Service finally allowed him to have surgery on his neck, but by then the tumor had grown from the size of a quarter to that of an egg. This is a form of torture. Tunkara has also had numerous problems since the surgery due to U.S. Immigration and Custom Enforcement’s neglect. He has suffered a loss of vision, ShaCorrie Tunkara told the crowd, as the neglect continues.

The rally was called by the Northwest Detention Center Resistance, which is also fighting to stop his threatened deportation. ShaCorrie Tunkara thanked the crowd for supportive phone calls, Facebook support and love, which has probably helped hold up Saja’s deportation so far.

Another prisoner is now on the 61st day of a hunger strike at the NWDC, as of this writing. A Mongolian man from Russia, he is demanding health care for himself and others as well as his freedom. Other prisoners have fasted with him.

There were two mass medical emergencies at the NWDC in September. One was a slag pile fire at Simon Metals, right next to the prison on the Tacoma tideflats industrial site. The fire burned for 10 hours before the fire department finally put it out. Prisoners reported coughing and vomiting, but were not even told what caused the fumes.

The other emergency was a severe measles outbreak. NWDC Resistance charged the prison with negligence and estimated the epidemic could have reached 400 out of 1,575 prisoners.

All these incidents have increased demands on the Tacoma City Council to shut the immigration prison down. Medical neglect is the top grievance of prisoners in immigration prisons, according to Freedom for Immigrants, a prisoners advocacy group. ICE announced in June that it would seek up to 15,000 additional beds in privately run detention prisons. A huge prison built to hold up to 3,800 children has been opened in the desert at Tornillo, Texas.

The increase in the torture and bondage of immigrants is bound to fan the flames of resistance, as seen by mass demonstrations against detentions in June and by current Central American im/migrant caravans.