Advance Auto Parts workers in Wilkes-Barre, Pa., cast their ballots overwhelmingly in favor of joining the Laborers’ International Union of North America (LiUNA) Sept. 9-10. With 476 workers eligible to vote for Local 1310, the union won 291 to 131.

This reversed an election the union lost in 2017 after AAP’s anti-union campaign. Warehouse worker Mario Cabrera said AAP used a smokescreen of “empty promises” to win, but the workers soon realized their mistake when AAP failed to perform. “Our situation didn’t improve after the first election, and that’s why so many more of us voted for LiUNA in this election and are excited for LiUNA representation,” said Cabrera. (berksmontnews.com, Sept. 14)

Less than 1 percent of AAP’s total 71,000 full-time and part-time workforce at 5,000 distribution centers and retail stores in North America are union. These workers, who make $12 to $18 an hour, are struggling under rising health insurance costs and mandatory overtime demands. (Labor 411, Sept. 16) The next step for Local 1310 is demands for better pay, health insurance and working conditions. AAP can afford it; the Fortune 500 company had sales last year of approximately $9.4 billion and a net income of $476 million. (Morning Call, Sept. 13) This victory shows AAP bosses that workers’ solidarity beats back empty promises! 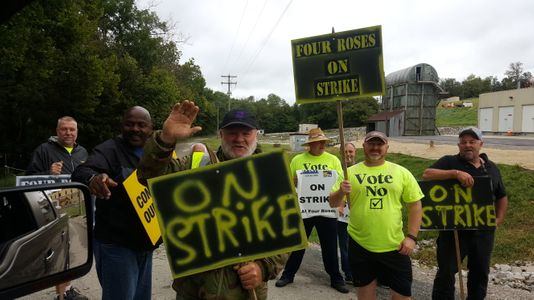 As thousands swarmed Bardstown, Ky., Sept. 16-22 to celebrate the Kentucky Bourbon festival, 53 workers at Four Roses Bourbon in Lawrenceburg and Cox Creek went on strike. They’re represented by Food and Commercial Workers (UFCW) Locals 10D and 23D and Service Employees 32BJ National Conference of Firemen and Oilers Local 320. The workers were totally opposed to Four Roses’ proposal to create a two-tier health care system, which would give experienced workers better benefits than new workers. (Fightback News, Sept. 22) Jeff Royalty, president of UFCW Local 10D, told In These Times that the proposal was designed to “short change the next generation.”

Other unions, such as UFCW Local 951, pledged support through press releases and petitions. To paraphrase one union flyer: “Four Roses Bourbon goes down easy; its workers don’t.” Two weeks later, on Sept. 21, the Four Roses workers won an agreement that included two choices for health care coverage for all workers, as well as wage increases of 30 to 50 cents an hour and a signing bonus totaling $3,500. (Louisville Courier-Journal, Sept. 21)

Over 2,000 postdoctoral and research workers at Columbia University in New York City created history on Oct. 2 when they became the first group of such workers to unionize at a private university. The National Labor Relations Board “determined that the work of a postdoc — a person who holds a doctorate degree and works to perform further research in collaboration with faculty members — is indistinguishable from that of other University employees,” noted the Columbia Spectator on Oct. 4. The newly formed union will be known as Columbia Postdoctoral Workers-United Auto Workers Local 2110.

Despite the university’s strenuous opposition to CPW-UAW, Alvaro Cuesta-Dominguez, CPW organizing committee member, told the newspaper: “We made history. We would like to expand our voice to the national level,” particularly for federal science funding and making research “more equitable and diverse.” In addition to fighting for higher pay, the union wants more detailed sexual harassment grievance procedures and assistance with immigration and visa issues. Meanwhile, the university has refused to negotiate with graduate students, who voted to unionize in 2016, struck last April and are threatening to strike again.

La Cantera Resort & Spa in San Antonio, Texas, was slapped with an Equal Employment Opportunity Commission suit Sept. 24. The suit alleges the resort created a hostile work environment by discriminating against Latinx workers in violation of the 1964 Civil Rights Act. After the resort was taken over by DH San Antonio Management LLC and Destination Hotels and Resorts LLC, Destination instituted a policy in fall 2014 forbidding Latinx banquet staff from speaking Spanish on the premises, though no other languages were forbidden. The head manager mocked workers for speaking Spanish, while another called it a “foul language.”

After more than two dozen workers protested, some were harassed and then fired. EEOC regional attorney Robert A. Canino noted that instituting a discriminatory language policy on top of verbal abuse ”strongly indicates workplace prejudice rather than a legitimate business need.” (eeoc.gov, Sept. 24)