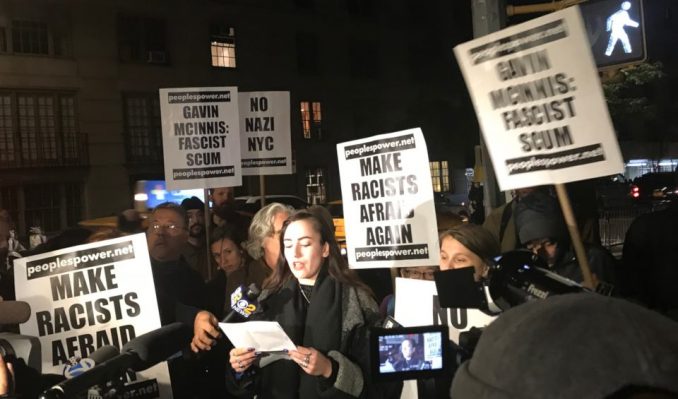 “The police will not keep us safe. We keep us safe.” That idea was central to a news conference held Oct. 19 that drew about 40 people to the corner of Lexington Avenue and 67th Street, near the 19th Precinct of the New York Police Department, on Manhattan’s Upper East Side.

Three speakers emphasized the danger posed by “alt-right” groups that are actually dangerous fascist gangs. They explained why the police offer no solution but are a big part of the problem, and urged the anti-fascist movement to mobilize in ever larger numbers to defend their own organizations.

Underlining the need for this message was the massive police presence that blocked off 67th Street, as well as the phalanx of police vehicles lining 67th and 68th streets and the avenues. The cop presence seemed aimed at intimidating those protesting.

Called by the Peoples Power Assemblies (PPA) and the Committee to Stop FBI Repression (CSFR), and supported by various NYC organizations that oppose fascists and police brutality, the news conference was a response to a vicious fascist attack a week earlier on Oct. 12.

Sofia Adams of the PPA explained that after the attack: “Footage surfaced of anti-racist protesters being viciously attacked by a self-proclaimed fascist gang called the ‘Proud Boys’ after a rally hosted by gang leader Gavin McInnes at the Metropolitan Republican Club on the Upper East Side. Emboldened by Trump’s racist and sexist rhetoric, these violent bigots now roam our streets, committing acts of coordinated violence with impunity, determined to make New York their latest venue for acts of unrepentant hate.

“Their violent assault was documented by citizen journalists who uploaded footage of Proud Boys kicking and punching defenseless activists while chanting homophobic and sexist slurs. The NYPD stood by and watched this happen. … Once again, as in Charlottesville, Va., the police are complicit, acting as an armed escort for white supremacy, sexism and homophobia.”

Adams concluded: “On Oct. 13, Gavin McInnes stated on his podcast that he has ‘a lot of support in the NYPD.’ We know this to be true. Even though the identities of these fascists have been made public, we doubt the NYPD or the U.S. justice system will make any serious moves to bring them to justice. We expect the NYPD to continue to blame anti-racist activists for the violence.”

Luis of the CSFR said: “My reason for being there that night [Oct. 12] was to stand against Gavin’s cult of anti-Semitic, transphobic, misogynist, homophobic bigots. That night I met everything I stand against in physical form … right-wing extremists, neo-Nazi sympathizers, skinheads all in matching uniform. They were escorted and protected by the NYPD, by the Strategic Response Group, by the Technical Assistance Response Unit, by the Metropolitan Republican Club and by the 19th [police] precinct.”

Solidarity with victims of police violence

Luis continued: “Please keep in mind the Strategic Response Group was created due to the increasing awareness of the Black Lives Matter movement in 2015. BLM is a group that wants nothing more than their inherent worth as humans beings recognized. The SRG is funded by the Department of Homeland Security and has exploded [in NYC] from 350 officers to over 800.

“Thankfully that evening we had our medics on standby, and we were able to rush to those hurt in what the media would call a ‘brawl.’ ”

Describing the fascist attack in detail, Popi Sen of the PPA said: “In the video footage of this attack, we see the police wait and watch the assault as it unfolds, doing nothing to prevent further violence.  In the aftermath of this attack, a question that we’ve heard repeatedly asked is: Why didn’t the NYPD intervene? The real question is why would anybody expect them to?”

Sen emphasized: “This is the same police department that promoted the officer who murdered Eric Garner [in Staten Island in 2014] to sergeant. Last Friday’s attack was overseen by the same unit, the Strategic Response Group, that was created to harass, beat and arrest anti-racist activists over the last four years, all under the pretense of counterterrorism.  So why exactly would we expect these same cops to protect us now?

“We cannot isolate our contempt for fascism to the confines of the internet.  We must confront this problem wherever it presents itself, including in the streets. This is a call to action. For all the people who have a stake in our struggle, we need you to join us out on the streets.”

Sen concluded by declaring: “The police will not keep us safe. We keep us safe.” Then they led news conference attendees in a chant of those same words.