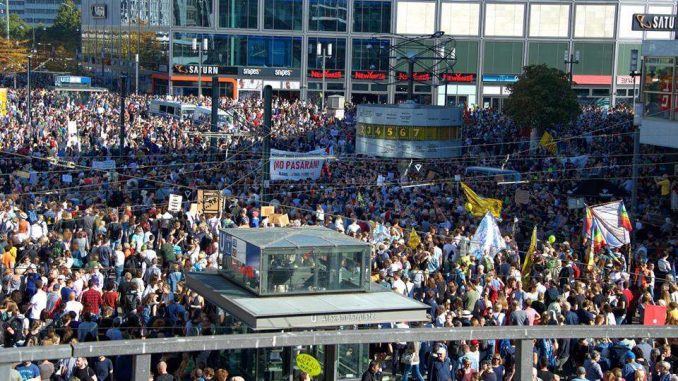 Anti-racists marched in Berlin, 250,000-strong, in a show of force against the German far right on Oct. 13. They came from all over the country — people of all ages, nationalities and political affiliations — to show solidarity with immigrants against restrictive government policies and racist, neo-Nazi attacks, which have escalated in recent months, causing an emergency situation in parts of Germany.

Aerial photographs showed the demonstrators filled a three-mile, tree-lined stretch in the city center. Banners led contingents with slogans reading, “Indivisible: Solidarity instead of exclusion” and “We are for a free and open society” and “United against racism.” The key word “indivisible,” said participants, made it clear that they would not tolerate divisiveness or any form of discrimination against refugees.

The declaration begins: “A dramatic political shift is taking place: racism and discrimination are becoming socially acceptable. What yesterday was considered unthinkable and unutterable has today become a reality.” Stressing that humanity and human rights are being openly assailed, it states, “This is an attack on all of us.”

“We will stand in resistance when fundamental rights and freedoms are in danger of being further restricted,” the document continues. “We stand against all forms of hatred and discrimination. Together, we confront anti-Muslim racism, anti-Semitism, [anti-Roma bigotry], antifeminism and LGBTQ phobia. There are already many of us.” The declaration stresses the movement’s activism: “In many places, people are actively defending themselves and others against discrimination, criminalization and exclusion.”

The statement criticized the growing nationalism in different countries in Europe and the rising income gap between rich and poor. It emphasized the need for inclusion. Significantly, in a dig at capitalist globalization, it contrasted the billions of dollars being made in profits, while massive numbers of low-wage workers and impoverished people live on the continent, lacking essential services.

Rola Saleh, a social worker who aids refugees in the city of Chemnitz, site of recent neo-Nazi assaults on immigrants, told the German broadcaster Deutsche Welle at the rally that refugees and those who assist them are being “criminalized” and put under surveillance, with more restrictive laws on the horizon. She explained that since the physical attacks, immigrants are frightened and the police won’t help them.

However, Saleh said, “There are people here who want to show that they don’t support what is going on in Germany, including from established politicians, all this hate, this whole debate about immigration.” (dw.com, Oct. 13)

Saleh was not the only demonstrator to criticize politicians. The complicity of leading capitalist politicians with anti-immigrant reactionaries was not lost on the protesters. Many of them criticized the major parties, Christian Social Union, Christian Democratic Union and Social Democratic Party, for not defying the xenophobes and strongly supporting immigrants.

The right-wing, xenophobic political party, Alternative for Germany (AfD), has led a vitriolic, racist propaganda campaign against immigrants since it was formed in 2013. It has seized on the migration crisis to whip up racism and bigotry. With an influx of asylum seekers fleeing U.S./European-backed wars and impoverishment and unemployment caused by imperialist exploitation in their countries, the AfD has scapegoated particularly Arab, Muslim and African refugees.

In August, AfD members and other neo-fascists physically attacked primarily Arab and African immigrants in Chemnitz. At their rallies, they yelled, “Close the borders!” while greeting each other with heinous Hitler salutes. Other assaults have taken place in Dresden, Kothen and elsewhere in the east. There have also been local mobilizations protesting the fascists and confronting them, notably in Chemnitz.

One region where the AfD has picked up supporters is Bavaria, which since World War II has been a bastion of the conservative Christian Social Union. Immigration, which has been at the heart of the struggle facing Chancellor Angela Merkel’s coalition government, was the key issue in Bavaria’s parliamentary election on Oct. 14.

The CSU is the Bavarian-allied organization of Merkel’s CDU. Given its position for closing the borders and turning away refugees, the CSU came in first with 37 percent but lost seats. The moderate Green Party, which campaigned under the slogan of “open borders,” gained 18 percent of the vote and came in second.

The Social Democrats (SPD), usually opposed to the CDU/CSU, is currently in their national coalition government. The SPD got just under 10 percent of the vote in Bavaria, coming in fifth. The arch-racist AfD also garnered 10 percent, allowing it to enter the Bavarian Parliament for the first time.

The neo-fascists have not gone unchallenged and opposition to them is growing. A quarter of a million people at the Berlin rally totals 8 times the AfD membership. Importantly, many of the protesters are organizers and activists — a hopeful sign. The struggle continues as solidarity grows.