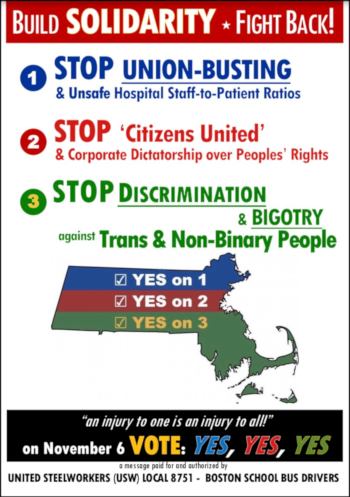 Three Massachusetts ballot questions this November need a YES vote. They present an unusual opportunity for people to mobilize through the political process in practical defense of progressive aims — even if people can’t push the Democratic Party machinery to drive this struggle.

Many workers and oppressed people in Massachusetts are cautious about political participation that starts and ends with voting for politicians. This is true despite the much-touted promise of “change” Democrats insist will result from a big turnout for midterm elections.

The Democratic Party has a tight statewide grip on the electorate here, even though the governor is Republican and there have been notable mutinies in the heart of Boston’s significant Black and Latinx communities. In those neighborhoods, incumbent Democratic Party elites were ousted in this year’s primaries by progressive young Black women candidates with grassroots community support.

In the majority of the state’s congressional districts, candidates are cookie-cutter careerist politicos, who appeal much more to their corporate donors than to the people.

Though voters are right to feel cautious about participating, the three ballot questions call out for a YES vote.

Question 1 is a proposal, drafted by the largest union representing nurses in the state, Massachusetts Nurses Association, to improve patient safety by establishing requirements that limit the number of patients assigned to nurses in various types of care environments. It’s also an important example of workers demanding to have input and offer solutions to a crisis in their working conditions.

Union nurses should be able to achieve these solutions through the collective bargaining process, rather than through a highly politicized statewide referendum. Yet because of the erosion of union rights, including measures that have eliminated the nurses’ right to withhold their labor as a bargaining tool, they must instead use the ballot and appeal to the whole population.

An overwhelming YES vote on question 1 should be a no-brainer in Massachusetts, a “blue state.” Yet hospital CEOs, nursing management and corporate health care lobbyists have poured unprecedented resources into the campaign to defeat the question. Nursing executive managers, donning scrubs (nurses’ work clothes), which they would never wear in their corporate office suites, appear in television ads and spread the lie that “real nurses say NO to question 1.”

The MNA and thousands of rank-and-file nurses are fighting a hard battle to defeat the campaign of confusion about Question 1. They explain that a YES on 1 is a vote for safe staffing of nurses in hospital and health center units, which are plagued with daily incidents directly related to understaffing and overstressed, overworked, overtired nurses.

It is also a vote for evidence-based research on patient care.

Politically, a YES vote is a vote against corporate health care for profit. It is also a vote for union rights — especially the right of workers who best understand the life-and-death risks of their work to offer solutions to fix unsafe conditions. That’s much better than having those conditions subject to management whims.

Question 2 aims to create a commission of unpaid volunteers to help better understand and challenge the ever-growing behemoth of corporate political power. Recent statewide polls show there is overwhelming support for such a people’s commission to design, draft and propose state laws and a federal constitutional amendment to limit corporate money and influence in the political process.

A YES vote on Question 2 is a vote against corporate dictatorship over the vast majority of people.

Question 3 is aimed to defend an already in-place Massachusetts law that provides some basic protections against discrimination for transgender people using public accommodations like restrooms, hotels, restaurants and gyms.

Opponents of Question 3 want to overturn the existing anti-discrimination laws and instead rely on draconian definitions of who is a woman and who is a man. Overturning the laws would allow any bigot to complain to a manager or call the cops when they encounter people in public facilities whose appearance or gender expression makes the bigot uncomfortable.

Keep MA Safe — the ballot question’s primary opponent — tries to hide its backward ideas about trans, nonbinary and gender-nonconforming people behind a false claim that they are protecting women from sexual predators. This virulent fearmongering is as patently misogynist as it is transphobic.

The righteous outrage that has been boiling up to the surface about rape, sexual assault and other misogynistic abuse and misconduct in the wake of the Kavanaugh hearings shares deep historical roots with the trans liberation struggle as well as to the struggle against racism.

Centuries ago, the patriarchal system of rule developed among agricultural societies. This system relegated women to reproductive labor and sexual objectification in order to enable the new exploiting class of male property owners to accumulate wealth and power and doubly reinforce their class rule.

Colonialism, rooted in Europe, furthered this violent exploitation by subjugating whole peoples across the oceans. Colonial rule drove into death and obscurity the existing gender-crossing and gender nonbinary practices and identities in non-European societies.

The legacy of this patriarchal and colonial abuse is at the root of today’s relentless rate of homicide of trans women of color. This persists in the sexist, racist and anti-immigrant behavior and micro-agressions that make many institutions, workplaces and interpersonal relationships a minefield for most women and oppressed people.

Class patriarchy and colonialism are the source of all the reactionary ideas that sow mistrust of trans and nonbinary people among cisgender people. They also sow disregard of LGBTQ people by straight people. Ballot Question 3 attempts to reverse this mistrust.

The right of any historically marginalized or oppressed group to protections from discrimination should never need to be up for public debate or referendum. And yet, once again, this is the reality in the U.S. That is why a YES vote on Question 3 is a vote against long-standing discrimination and the rising tide of reaction and fascism.