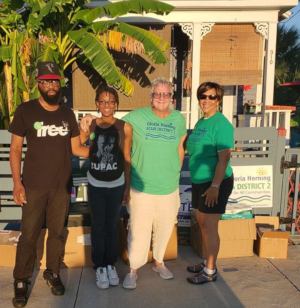 Pensacola, Fla. — Convoys of relief supplies provided by a left and community coalition effort headed from this city to Panama City, Marianna, Parker, Mexico Beach and other locations devastated by Hurricane Michael on both Oct. 12 and Oct. 14.

The Pensacola trans organization STRIVE (Social Trans Initiative) coordinated with the local NAACP chapter and with local members and candidates of Workers World Party, the Party for Socialism and Liberation and the Green Party of Mobile, Ala., to organize supplies.

The convoy also carried cooking grills and charcoal to set up stations to feed people since no power and no water have been available in destroyed areas. The convoy brought supplies on Oct. 14 to Glenwood, a lower-income, predominantly Black neighborhood where a local church and two nightclubs facilitated distribution.

This reporter, travelling with the convoys, witnessed first hand that city governments, the state of Florida and federal agencies are far, far from “handling” the catastrophe.

Panama City Beach and Panama City are completely devastated. The towns between Panama City and Mexico Beach are gone. Buildings and homes are flattened, powerlines snapped in half, roads are blocked by trees.

Category 4 Hurricane Michael is the strongest hurricane on record to ever hit the Florida Panhandle, and the fourth-strongest landfalling hurricane in the contiguous U.S. in terms of wind speed.

People are posting Facebook appeals for help for their neighbors trapped in their homes with no food or water. One message noted: “Chainsaws haven’t been enough to allow them to get out. … If anyone is heading that way with supplies (or some way of moving this tree).”

Yellowhammer Alternative sent a Facebook alert: “[D]ozens of people are being thrown out of condemned, hurricane-damaged housing in Panama City. Tenants are not being refunded rent moneys paid eight days ago and [are being] given ONE day to leave. These are folx with no power, no internet, limited access, and are survivors of a historic hurricane that has devastated this area completely.”

As the convoy pulled into Panama City on Oct. 12, grown people who had lost everything were running in the streets to the convoy cars, asking for food because they couldn’t feed their children.

But cops were parked at every single grocery store still standing, ensuring that “looters” couldn’t get to the food and water that’s desperately needed. In fact, cops and military police are patrolling the streets, arresting anyone out past the curfew. On social media, people identified with both major capitalist parties, Democrats and Republicans alike, are calling for “looters” to be shot.

One of the convoy members commented later on Facebook: “Seeing cops outside of a grocery store that was destroyed, so people couldn’t take food they needed. … All of that food [can be] written off as a insurance thing. It’s just going to be thrown away — but even if it wasn’t, the survival of people should be most important, not money.”

Someone had raised a U.S. flag high above the ruined landscape where nothing is being done to help the poor and suffering, while rich politicians and corporation owners shrug their shoulders and say, “Panama City Strong!”

The opening for far-right-wing reactionary abuse and violence is great. While on the ground, this reporter received word that the Border Patrol had been spotted doing surveillance in Altha, Bayview and Panama City. As the Altha police gave out food, the Border Patrol was parked across the street, ready to grab people.

The League of the South, a white supremacist group, has posted social media announcements that it is sending a “team” into the disaster area to “help out” in predominantly “white areas.”

STRIVE issued a Facebook alert about the League: “As we know, cops and Klan work hand in hand, so [the League] will be assisting police in working against ‘looters.’ We need to be extra vigilant and do what we can to prevent their entry.”

At the year’s anniversary of Hurricane María that ravaged Puerto Rico and intensified U.S. oppression there, a broad swathe of the southeast U.S. also struggles to recover after the impact of two monumental hurricanes. As we confront the economic system that both causes and profits from catastrophe, the words of Black Panther and prison activist George Jackson are instructive: “[The capitalist economic system] is perpetuated beyond the stage of decadence in spite of its own outrageous disorder. Its seemingly remarkable ability to return from crisis is not proof of natural durability. Rather it is proof of a destructive will to power at any cost.”

Socialist Cuba weathers hurricane after hurricane with planning and compassion, usually with no loss of life and with preservation of basic systems for survival, but the capitalist U.S. wrings its hands over “chaos” it allows and then profits from.

In this context, the words of Mao Zedong, the great Chinese communist revolutionary, are also helpful: “What we need is an enthusiastic but calm state of mind and intense but orderly work. … To link oneself with the masses, one must act in accordance with the needs and wishes of the masses. All work done for the masses must start from their needs.”

Serve the people! STRIVE is continuing to coordinate relief supply efforts with the left coalition. Contributions can go to paypal.me/strivepensacola.