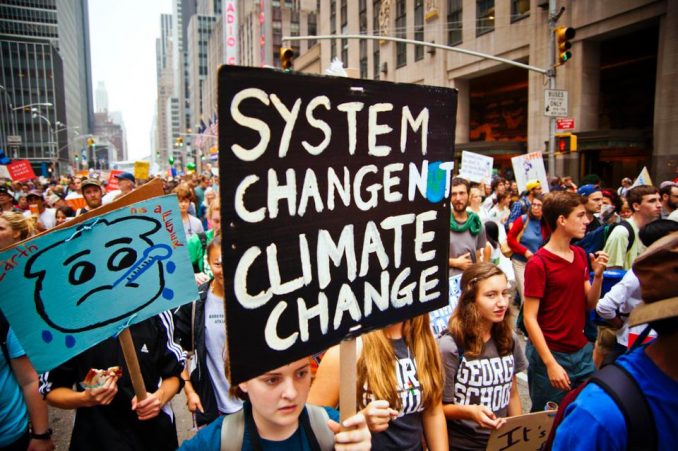 A fierce debate is raging within the environmental movement. It comes very late, but it is here now and that must be applauded. It was summed up by a large banner stretching across a boulevard in Paris during a recent demonstration: “Change the system, not the climate.”

This is not the first time that marchers at a large protest over climate change have denounced the capitalist system for the dangerous rise of heat-trapping carbon dioxide gas in the atmosphere. Many of the hundreds of thousands who clogged Fifth Avenue in New York City on Sept. 20, 2014, for the huge People’s Climate March carried signs and stickers attacking the profit system.

But the main message from speakers or slogans for that event was not “change the system.”

They appealed to the capitalist government to take measures to cut greenhouse gas emissions. These measures were supposed to modify the market economy in ways that would make carbon-based energy less profitable.

That appeal and approach have proved fruitless, especially with the Trump administration’s withdrawal from the Paris Accords on climate change, a weak agreement to begin with, and the virtual destruction of the Environmental Protection Agency, putting top executives from the polluting fossil fuel companies in key government positions.

It’s now four years since that big march and, despite the impassioned efforts of many sincere environmentalists, there has been no improvement in the forecast. On the contrary, the world’s leading scientists have come up with their most dire scenario ever for what the future will be like.

In a recently released U.N. report on climate change, scientists say that unless drastic changes are made to the world economy within the next 12 years, we will be doomed to live on a permanently hotter and much more dangerous planet.

This message resonates with the hundreds of millions of people who have suffered from increasingly powerful hurricanes, typhoons, tornadoes, floods, mudslides, droughts, earthquakes, volcanic eruptions and tsunamis all over the globe.

Yes, scientists now believe that the increased intensity of all these “natural” disasters is related to climate change.

We already knew about the dangers from storms. But now they say that the melting of the great glaciers and polar ice caps, along with rising sea levels, is shifting the weight on the earth’s surface, causing the tectonic plates to move and trigger earthquakes, which in turn can cause tsunamis like the one that just killed thousands of people in Indonesia.

From Puerto Rico to Haiti to the Carolinas and the Gulf Coast of the United States, from Nepal and Bangladesh to the islands of the Pacific, tragedy is striking, and it is always the poorest who suffer the most. Rich owners of beachfront estates may lose property, but they can save their skins by jetting away from the howling winds and raging waters.

‘Capitalism will not safeguard our planet’

Neither the rich nor a “kinder, gentler capitalism” will save the planet or the people living on it.

Do the capitalists know this? Here’s a quote from Masoud Movahed, an economist from New York University whose paper on “Does capitalism have to be bad for the environment?” was presented to the World Economic Forum, an annual gathering of some of the world’s biggest capitalists. After describing how “the private-profit motif lies at the core of capitalism,” he concludes: “In short, the market mechanisms under capitalism do not provide incentives for preserving the environment.”

Movahed continues: “Firms are constantly threatened by market competition to cut costs and optimize profit. The environment thus falls prey to the compulsive market behavior of the capitalist mode of production. Without the intervention of non-market entities such as the state, international organizations and social forces, capitalism as an economic system simply will not safeguard our planet.”

Very well put. But appealing to such a group as the World Economic Forum is like asking tigers to be vegetarians!

Capitalists, whether educated about the grave dangers facing humanity or not, are still capitalists, driven by the need for profit at any cost.

Instead, what is needed is to alert the working class that the planet — and the people — will die under capitalism. The working class is the only social force with the capability of bringing down capitalism and building socialism — the alternative to capitalist destruction.

Though workers in many countries are already anti-capitalist, huge sections of the working class in this country have never heard anything positive about socialism.

Right now, workers are being told that China is the world’s biggest polluter and that proves socialism is no better than capitalism. Left out of this narrative is that China has more than four times the population of the U.S, which means that its greenhouse gas emissions per capita come to about one-third those of the U.S. population. This is happening even as China has grown exponentially in productive capacity, while the U.S. for several decades has been in a process of deindustrialization — shedding millions of jobs with little protection for fired workers.

China is now the largest manufacturing country in the world and by far the biggest exporter of manufactured goods. Despite this, it has been able to reduce its emissions in recent years because China has an infrastructure based on state ownership and planning and controlled by the Communist Party.

China’s five-year plans have been shifting the economy away from coal in favor of renewables, while at the same time building up a more efficient infrastructure for transmission of energy.

On March 1, 2016, Reuters reported that China had drawn up plans to cut 500 million tons of coal production over the next three to five years and was allocating $23 billion to retrain and resettle the workers. “The Ministry of Finance said in January it would also collect 46 billion yuan from surcharges on coal-fired power over the coming three years in order to resettle workers. In addition, an assortment of local government matching funds will also be made available.”

The U.S. capitalist class is historically responsible for the lion’s share of global emissions. And ever since the rise of the Rockefellers, Standard Oil and their affiliated banks, the fossil fuel polluters have run this country politically.

The environmental movement needs to turn its face to the workers, the only class that can unseat the exploiters and transform society. It must demand not only the shutting down of polluting industries but the funds to move and retrain laid-off workers. Take the money from the budget of the U.S. Department of Defense, the biggest polluter in the world!