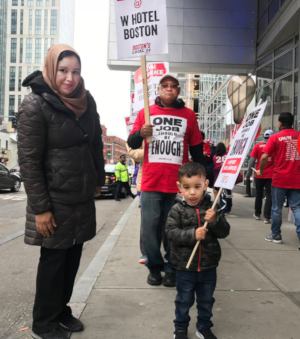 Oct. 12 — Chanting “7 a.m. wake-up call!” and “Don’t check in, check out!” 500 Boston hotel workers on the tenth day of the national strike against Marriott International shut down rush hour traffic for half an hour tonight. Represented by UNITE HERE Local 261, housekeepers, cooks, bartenders and bellhops walked off the job as part of a now 7,800-worker-strong national strike.

Workers also walked out Oct. 3 in San Francisco, San Diego, Oakland and San Jose, and on Oct. 7 in Detroit, while Waikiki, Maui and Seattle workers struck the morning of Oct. 8.

As in Boston and many places it operates, the five Hawaii hotels owned by Kyo-ya were bought out by Marriott, the world’s largest hotel company that netted $1.4 billion in 2017. According to today’s Boston Globe, the city’s largest hotel, Sheraton Boston, generated $28.4 million in operating profit in the last year, while Westin Copley made $31.5..

Amid all this wealth, hotel workers are among the 7.8 million workers across the country forced to hold multiple jobs to barely keep their heads above water. They are demanding: “One Job Should Be Enough.” (MadameNoire.com, October 2016)

Marriott is cutting back hours by hiring temps and using technology to replace workers.  It is shutting down restaurants, bars and room service to increase profits and outsource jobs to the gig economy. Uber, Lyft and UberEats have cut into the livelihoods of tip-dependent hotel food service workers and door workers who traditionally secure cabs for customers.

An often-discussed issue on the picketline is Marriott’s deceitful “Make a Green Choice Program.”  Cashing in on people’s genuine desire to help save the environment, the program gives points and rewards to customers for refusing housekeeping services. UNITE/HERE in its report, “Marriott’s Dirty Choice,” said the program reduces housekeeper hours and leads to more injuries.

Housekeepers report that this program results in rooms filled with days of filth that require backbreaking labor and heavy lifting as well as use of stronger cleaning chemicals. As UNITE HERE Local 26 President Brian Lang put it: “This is a labor-reduction program masquerading as an environmental program. Union housekeepers have seen their hours reduced 15 to 20 percent because of the program.”

This deceptive marketing has also been followed with outright lies by the company that posted an anti-union letter claiming to have met worker demands. Management’s effort to cut union power and divide workers has been met with determined effort and loud picket lines in front of empty lobbies and in the streets.

To win this struggle, however, UNITE HERE workers need more support now, especially from communities.  Concrete solidarity came this week in Boston from the local progressive Asian American and Pacific Islanders community who swelled the union’s picket line at the Westin hotel. AAPI is fighting to protect affirmative action for Black and Latinx students at Harvard University. They were outraged that the right-wing, anti-affirmative-action think tank Students for Fair Admissions and their cronies had crossed the picket line.

“The strike is coming to a dangerous point as it ends its second week,” Harvard Local 26 Chief Steward Ed Childs explained to Workers World. “Marriot owns 10 percent of its market in the world, so this is a fight not just in the U.S. But in this country, the attack against UNITE HERE is a national effort from Washington and Wall Street, along with National Right to Work, eased by the Janus v. American Federation of State, County, Municipal Employees court decision; the termination of temporary protected status [for Caribbean and Central American workers]; DACA [Deferred Action for Childhood Arrivals]; and attacks on affirmative action — all stacked against workers. UNITE HERE has responded with a national campaign, and we’re fighting not just for our union but for workers in general.”

Childs advised: “Mobilize yourselves. Raise this in your union meetings. Talk about it with your co-workers. We’ve never faced anything like this. This is an attack on you, too.”

Childs cited the Wisconsin protests of 2011 as a source of valuable inspiration and important lessons: “When Governor Scott Walker brought right-to-work legislation to this historically union-stronghold state, it provoked a strong defense that united all unions, the Black and Latinx communities, campus activists and the Occupy movement. Hundreds of thousands protested daily throughout the winter. They ultimately seized and occupied the State House for weeks with rank-and-file union members chanting ‘General Strike!’ in the capitol.

“Although the unions had built the power to do that, the Democrats sold them out, convincing union leadership to await a recall effort, but then running the racist, pro-life mayor of Milwaukee as their candidate. That split the movement.”

Childs observed that people in Madison at the time were very responsive and supportive, easily seeing through the deceptive “rights” rhetoric that like “Green Choice” is just a foil for corporate take-backs.

“Unfortunately, we never made it to the offense,” Childs added. “A general strike in Wisconsin would have been taking the offensive and could have defeated the right-to-work campaign. Continuing the campaign to contemplate a general strike may be what is needed today to defeat the attack on the unions by Wall Street, Marriot and the Trump forces.”

“Bring the hotel strike to your unions and community. Let them hear from workers that it’s important for the whole workers’ movement to train leaders. Show up at the line. Give any support they can. But the unions then need to go on the offense and call for a general strike.”