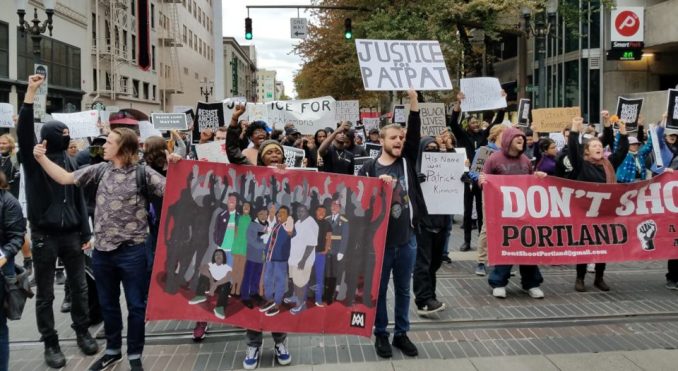 Marchers turned out in mid-October to protest the racist murder of Patrick Kimmons by Portland police.

Portland, Ore. — Police shot and killed Samuel Rice, a 30-year-old man with a history of mental disabilities, here on Oct. 10.

That’s the third Portland police killing in just two months —  two Black men, Jason Washington and Patrick Kimmons, and a person known by the cops to have mental health problems.

In 2012, the Portland Police Bureau was investigated by the U.S. Department of Justice and found guilty of using excessive force against people suffering from mental health problems. The DOJ made key recommendations to the police to minimize their use of force.

At an Oct. 4 reportback conference on the PPB’s compliance with those recommendations, the DOJ found that improvements were made in the speed at which those events were “written up” and documented. But there were still many instances where police force could have been avoided or minimized.

Six days after the conference, Rice was fatally shot in the head by a police sharpshooter. Rice had been holding his female partner hostage in a local motel when he was killed. Witnesses said Rice had been talking “nonsense” to the police, who had taken Rice and his partner to mental health treatment facilities in the past.

There are now several studies showing that Black men and people with mental disabilities are shot and killed by police at disproportionately high rates nationwide.

Since the dawn of the Black Lives Matter movement in 2013 and the murder of Freddie Gray in 2015, several studies have tracked the number of police killings in the U.S. Similar results from the Washington Post (“Fatal Force”) and the Guardian (“The Counted”) show that Black men are between 9 and 16 times more likely to be killed by police than other people. In 2017, Black men, just 6 percent of the population, made up 22 percent of those shot and killed by police.

Nearly half of the police killings in the U.S. are of people with mental health or other kinds of disabilities, according to several reports, including those from the Ruderman Family Foundation and the Treatment Advocacy Center. They show that media coverage neglects to focus on disabilities and mental health considerations and that police use lethal force in cases where urgent care would be a better solution.

The link between disability and racial and economic justice has been getting more attention since the consecutive police murders of three Black men, all of whom had a disability: LaQuan McDonald, Philip Coleman and Quintonio Legrier.

“Police Killings: The Price of Being Disabled and Black,” a June 2017 Guardian article, used information from the Ruderman study. However, the authors add that most current studies rely on anecdotal information and search reports from national newspapers. These cannot give the full story as police are resistant to tracking their use of force, and police killings in small, oppressed neighborhoods are underreported.

A recent audit by the city of Portland shows that “gang patrol” officers disproportionately target African-American people. However, the report notes it is not definitive because, like most police bureaus, the Portland Police are not keeping reliable data. The city’s recommendation to the PPB is an obvious one: Start collecting more data.

But better numbers will simply mean a more accurate tally of police killings. Only mass outcry and organizing against police brutality will stop the accumulation of the deadly data of injustice.