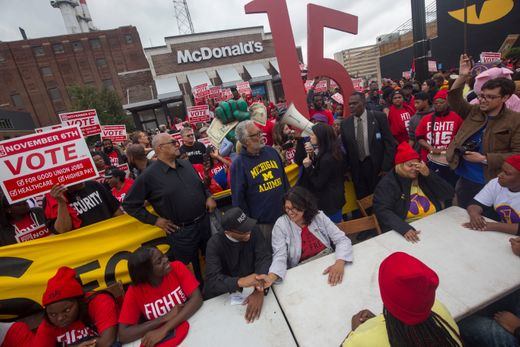 McDonalds employees in front of McDonalds on Woodward Avenue, Detroit, Oct. 2, 2018 during a protest.

Almost six years ago, Michigan became a “right-to-work” state. The bill, passed by the state legislature and signed by Gov. Rick Snyder in 2012, was a big setback for organized labor in a state historically a union stronghold. However, a number of recent battles show that unions and worker advocates are stepping up the resistance in Michigan.

Road construction projects, brought to a standstill in September when the Michigan Industrial and Transportation Association forced members of Operating Engineers Local 324 out on layoff, are back on the road for completion. This is a huge relief to the driving public.

MITA, to which hundreds of contractors are affiliated, imposed the layoffs after OE members had worked without a contract for months. The bosses were hoping to pressure Local 324, which represents all unionized heavy equipment operators in Michigan, to accept a master contract with all of its unionized affiliates.

Gov. Snyder offered to bring in the Michigan National Guard to run the equipment. Next, the plan was to bring in nonunion operators to scab. Both Snyder and MITA reneged on a back-to-work agreement agreed to by the union.

“Both MITA and the state of Michigan have the ability to get the projects started again immediately,” Local 324 Communications Director Dan McKernan said at the time. “The state, through MDOT [the Michigan Department of Transportation], can levy fines and penalties to the contractors for stopping the work. The state of Michigan needs to protect the drivers and taxpayers of the state and levy these penalties immediately.” (oe324.org)

The union did not back down. In the end, the governor, MITA and the union agreed to bring the OE members back to work and continue working without a contract while both parties undergo state-supervised mediation.

At the same time that union members were returning to work on the roads, University of Michigan nurses also were claiming victory. Over 5,700 nurses, members of the Michigan Nurses Association, were working without a contract since June.

On Sept. 17, the union voted overwhelmingly in favor of a strike. The prime issue of contention was the need to maintain safe staffing levels. Other concerns include a two-tier pay structure based on which facility a nurse works at and cuts to pension plan contributions.

On Sept. 29, UMPNC announced a tentative agreement with Michigan Medicine. Details of the agreement have not been made public, but the bargaining team unanimously recommended ratification. Voting will be completed by October 10.

Over 1,000 fast food workers struck McDonald’s and other chains in the Michigan cities of Flint and Detroit on Oct. 2. The bravery of these vulnerable low-paid workers was demonstrated by their willingness to risk firings as well as injury or arrest during their protest.

Early in the morning, at least six strikers in Flint were rushed to the hospital after being hit by a truck. Fortunately, there were no life-threatening injuries and so far it appears the strikers were not targeted intentionally.

In Detroit, 18 people were arrested when D15 — the Detroit chapter of Fight for $15 — took to the streets to demand union recognition, $15 an hour, and safe and better working conditions.

Gretchen Whitmer, front-runner in the race for governor, attended the action in Flint as well as a meeting of the Operating Engineers that took place before the lockout ended.

Clearly, Democratic Party politicians feel compelled to be seen supporting workers in struggle. Resistance to exploitation is rising despite the political climate of hostility and the many anti-labor bills and court rulings coming out of state legislatures and Washington.

The writer is a 30-year UAW Chrysler worker.