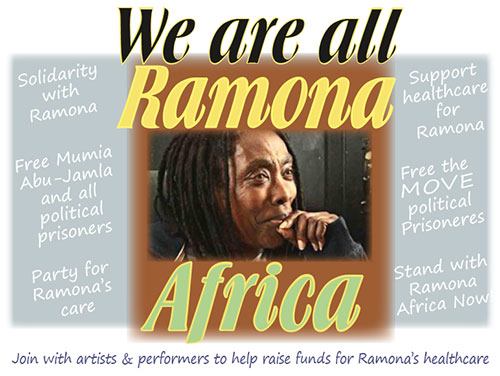 Workers World Party joins thousands around the world in the call to help our sister, Ramona Africa, fight for her life.

Ramona Africa is the last survivor of the 1985 firebombing of the MOVE home in Philadelphia, May 13, 1985.  She was severely burned, arrested immediately after the bombing and falsely charged in the incident. She served seven years in prison. After being released, she returned to Philadelphia and continued to work with MOVE as minister of communications.

Ramona was diagnosed with lymphoma after she suffered a stroke that left her unable to walk early in August.

Ramona is a revolutionary who speaks about freedom and equality for life for all living things. She speaks of a better world: a world not based on violence and domination but a world based on dignity and respect for all people of all backgrounds.

Ramona has respect for life, clean water, fresh air, natural food and shelter, all of which is needed for quality of life. She not only speaks about the principles of freedom, she lives, breathes and fights for the freedom that she speaks of.

Harriet’s Daughters: Ramona Africa, Pam Africa, and Monica Moorehead,” Mumia said, “These three women, Ramona, Pam, and Monica, are like Harriet [Tubman] because they fight for freedom every day against great odds and they keep on pushing no matter what.”

Mumia Abu-Jamal had this to say in a recent audio commentary “Saving Mona” posted on Prison Radio, September 2, 2018: “The woman who hit the ground running, who suffered a foul and unjust imprisonment, who showed an uncanny strength, who spoke up for justice all around the world has been forced to rest and recuperate. MOVE needs your help to support her in this rest and recuperation that she needs.”

Ramona has been there for us. Now it is time for us to be there for her.

To make a donation to help pay for Ramona Africa’s medical expenses, please go to www.gofundme.com/helpsaveramonaafrica.