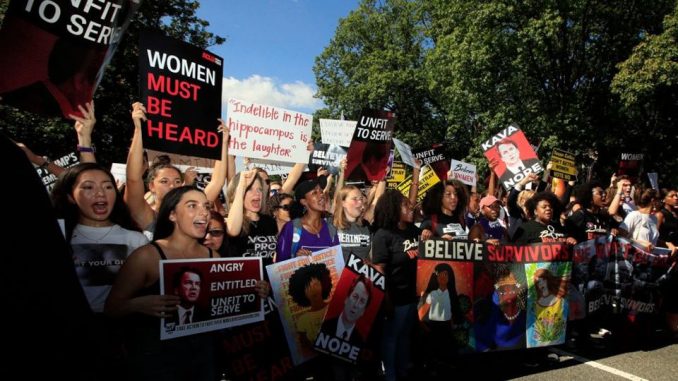 The confirmation of Brett Kavanaugh to the Supreme Court on Oct. 6 was undoubtedly a win — for the moment — for the U.S. capitalist class seeking to keep its grip on repressive state power. That he was voted in despite credible and powerful evidence that he sexually assaulted several women emphasizes the shameless brutality of this ruling class.

Millions experienced this reactionary victory as agony, as the hearings called up their own experiences of trauma — women, especially women of color, gender nonconforming women, young and older women, women with disabilities, trans people of all genders. And others also — women and men assaulted when they were children by those who held power over them.

And millions have been called to fury and renewed fightback, as the depth of sexual violence toward women and other genders was revealed.

As the struggle continues, those ready to act have powerful histories of organized resistance to draw on. The march of Missing and Murdered Indigenous Women in Seattle on Oct. 4 is a reminder of how Native peoples have fought colonizing assaults, including rape, for centuries with women and two-spirit people in leadership.

For Black women in the U.S., the struggles against rape, sexual assault and many other crimes of racism — led by Ida B. Bells, Anna J. Cooper and others — are inextricably intertwined. Perhaps the earliest U.S. record of an organized anti-rape effort comes from 1866, when a group of African-American women testified before Congress that a white mob, including police, had perpetrated gang rape against them and their community during the Memphis Riot. (tinyurl.com/gny47ox)

This legacy of resistance remind us that a struggle against violence toward women must be simultaneously a struggle against racism and national oppression, and a struggle to overturn the system of private property relations that historically gave rise to the ideas and practices of male supremacy and white supremacy that permeate every aspect of class relations in the U.S. today.

In “The Origin of the Family, Private Property and the State,” Friedrich Engels wrote that the fall of matriarchal society in prehistory had been a “world defeat of women.” He referred to the partitioning of society into classes as ruling-class men asserted control over surplus resources, over the bodies of men who were workers and over the bodies of women, who were both workers and the only people who could produce more people.

Now, as anger has built again over women being abused and treated as property, there is the chance to build solidarity and intertwined struggles for justice. As Dorothy Ballan noted in “Feminism and Marxism,” Engels understood that patriarchy was not eternal. If patriarchy was established at the same time as class society, then it could also be dismantled along with class society.

We are inspired by the rising of the recent U.S. strike of low-wage McDonald’s workers. Led by women of color, they declared a Sept. 18 walkout against rampant sexual abuse at their jobs. Supported by male worker allies, the women demanded both their rights as workers and their liberation as women — to end their bodies being used as company property at the whim of owners, managers and customers.

Marx and Engels, in the Communist Manifesto, said the goal of communists was a world in which women were liberated from being “articles of commerce and instruments of labor.”

In Workers World Party, we are fighting for the liberation of all women from all forms of sexual violence and exploitation. We are fighting for a world in which all people of every gender, sexuality, age, nationality, ability and disability are free from abuse and exploitation, and free to develop brilliantly and beautifully in all their many aspects. We are fighting to build a socialist road to that world. We must be willing to meet every challenge to make that happen.