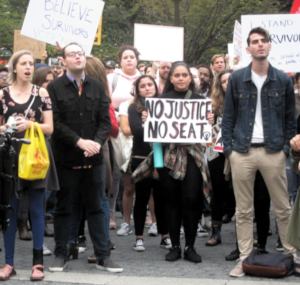 An Oct. 6 protest in New York City against the confirmation of reactionary Kavanaugh to the U.S. Supreme Court.

At the vote confirming Brett Kavanaugh to the U.S. Supreme Court on Oct. 6, woman after woman screamed out in protest from the Senate gallery and was carried away by guards. Reactionary presiding Vice President Mike Pence hammered for “order,” while at one point there were so many disruptions the voting had to be paused. People were pounding in outrage on the closed entrance to the Senate floor.

U.S. Capitol Police said a total of 164 people were arrested that day for “crowding, obstructing, or incommoding.” (Washington Post, Oct. 6)

The main focus of protest was Kavanaugh’s denial, under oath during the Senate confirmation hearings, that he had sexually assaulted three women, including Dr. Christine Blasey Ford. Dr. Ford testified extensively to the Senate Judiciary Committee about Kavanaugh assaulting her when she was 15.

The depth of opposition to Kavanaugh was revealed when on Oct. 4 over a thousand people from throughout the country, mostly women, demonstrated on Capitol Hill. A hundred people even flew in from Alaska.

Someone had rented a truck with a movie screen in order to play and denounce President Trump’s infamous “Access Hollywood” tape in which he boasted of sexually assaulting women.

At the Senate Hart Office Building, crowds saying “NO” to sexual assault and to the reactionary agenda that Kavanaugh represents flooded the atrium and every floor. Over 300 chanting, militant protesters were arrested that day.

Hundreds of people organized by Missing and Murdered Indigenous Women marched through downtown Seattle Oct. 4 to remind those watching of the centuries of U.S. colonizer rape and violence toward Indigenous women and peoples.

On the same day, in upstate New York, students walked out of classes in protest at Syracuse University, built on the land stolen from the Onondaga Nation. One student asserted: “Brett Kavanaughs” don’t come out of nowhere — that the culture develops abusers. Another student, reading from a letter to her sexual abuser, said, “This has been going on for forever,” and signed it “an unapologetic Brown girl.” (Syracuse Post-Standard, Oct. 4)

There were too many acts of indignation and outrage at Kavanaugh’s  nomination to list them all.

The ultra-right ruling class represented by President Trump have swept aside even the possibility of Kavanaugh’s sexual assaults and endorsed him wholeheartedly for his proven judicial record, which is racist, anti-woman, anti-worker, anti-civil rights and thoroughly reactionary.

Trump tried to discredit the women who brought forward their assaults by tweeting they must have been “paid” for their testimony. Trump viciously parallels a defamation used against justice seekers over and over in U.S. history — the lie that anyone fighting for change must either be an “outside agitator” or have been “put up to it” for money. The NAACP even had to fight this smear in 1957 against the nine Black children seeking to integrate the public schools in Little Rock, Ark.

Outrage against Kavanaugh broke out initially on July 9 at the Supreme Court on Capitol Hill, the very night Trump announced the nomination.

Hundreds continued to demonstrate throughout the month.

During Senate Judiciary Committee hearings the first week in September, over 227 demonstrators were arrested. (NPR, Sept. 8) Protests intensified during the week of struggle leading up to Kavanaugh’s confirmation by the Senate.

Hundreds were trained in a technique called “bird-dogging” — how to persistently follow and confront U.S. senators and representatives on crucial issues. The most dramatic example was caught on CNN video Sept. 28 when Ana Maria Archila, co-executive director of the Center for Popular Democracy, and Maria Gallegher, both sexual assault survivors, confronted Sen. Jeff Flake of the Judiciary Committee in an elevator.

To cover himself, Flake then called for an additional FBI “investigation” of some assault claims against Kavanaugh, which unsurprisingly failed to back the women up — a reminder that the FBI is first and foremost an arm of state power.

The reactionary impact of Kavanaugh’s confirmation is acknowledged widely at the national level. “The stakes could not be higher,” said Sherrilyn Ifill, Director-Counsel of the NAACP Legal Defense and Educational Fund. She named in particular his threat to voting rights, fair housing, affirmative action, the right to health care and the right to “equal justice under the law.” (Essence, July 12)

An AFL-CIO statement on the occasion of Kavanaugh’s nomination was clear: “Judge Kavanaugh has a dangerous track record of protecting the privileges of the wealthy and powerful at the expense of working people.” (July 9)

All progressive U.S. organizations are calling for the energized fight to continue. Without doubt, there will be many more protests to come, as the people mobilize and organize to stop the woman-hating, racist, anti-LGBTQ prejudice and the anti-worker agenda of those in seats of power. As the struggles of the past have taught, the people cannot depend on the courts or on capitalist elections to bring justice. The people must depend on solidarity and the power they win arm-in-arm with each other.