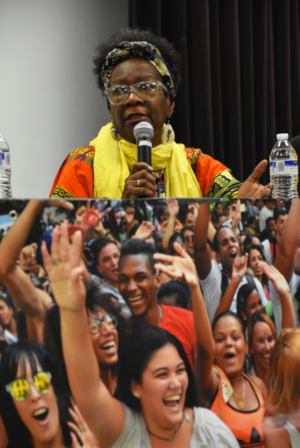 Days of Action demand end to blockade of Cuba.

Washington, D.C. — The 2018 Days of Action to End the U.S. Blockade of Cuba concluded here on Sept. 28. The week’s program included an afterschool discussion in a Washington, D.C., high school; meetings at two local universities; visits to congressional offices; discussions on two popular, progressive radio programs; and two documentary films at a downtown multiplex cinema, which drew a full house.

One film was a timely new production, “¡Lucha Sí!,” about the struggle for public education in Puerto Rico. The other was “Maestra,” the story of Cuba’s 1961 literacy campaign. These movies, viewed side-by-side, zero in on an essential difference between capitalist and socialist economic systems through the lens of education.

Jinnette Morales Díaz, one of the three women directors of “¡Lucha Sí!,” traveled from Puerto Rico for the discussion. Her daughter attends a special-needs program that was at risk of closing after Hurricane María struck, but was saved when Morales took the extreme measure of going on a hunger strike to demand the school reopen.

Tears came to Morales’ eyes when she learned about Cuba’s enormous campaign and struggle to teach people to read and write in the early years of the revolution. Now, in the 21st century, Puerto Rico is fighting to keep schools open. Meanwhile, the powerful U.S. tries to make education a business.

Jennifer Wager, another director of “¡Lucha Sí!,” spoke also as a teacher whose New Jersey school had been threatened with closing. Wager also directed last year’s “Dare to Dream,” about U.S. students at Cuba’s Latin American School of Medicine. She called for international solidarity to help Puerto Ricans defend their education system.

The audience received a special treat when Norma Guillard, who was in town visiting friends, joined the after-film question-and-answer period. Guillard is one of the women in the film “Maestra,” who shares her experiences as a 15-year-old during the 1961 literacy campaign and discusses the campaign’s impact on her later life.

Guillard commented on the shared colonial history of Puerto Rico and Cuba, saying that in the Caribbean those islands are regarded as two wings of the same bird. In the case of education, one wing is broken, while the other — the Cuban wing — is strong and soaring high. In 1959, the Cuban revolution broke the island free from U.S. imperialism.

Catherine Murphy, writer and director of “Maestra,” moderated the panel. Murphy participated in many of the week’s community engagements, sharing knowledge she’d gained from more than a decade of work on the film.

The literacy campaign shown in “Maestra” developed into an adult literacy teaching model “Yo Sí Puedo” (Yes I Can). It’s now used in 30 countries to teach how to read in many languages, including Indigenous languages and English. The late Dr. Leonela Relys Díaz, who was a 14-year-old brigadista during the 1961 campaign, led the development of a radio literacy program in Haiti. Then, at the request of historic Cuban leader Fidel Castro, she worked to adapt this program for television.

Two doctors from the U.S. who are graduates of Cuba’s Latin American School of Medicine contributed to the week’s theme. “In Cuba, education is a national priority. In the U.S., education is under attack,” stated Dr. Elizabeth Arnold and Dr. Eduardo Alvarado. Instead of learning in the competitive system practiced in the U.S., they learned medicine through the Cuban teaching model, where the goal is for everyone to succeed.

The International Committee for Peace, Justice and Dignity initiated the 2018 Days of Action, its fourth such effort in Washington, D.C. This work was spearheaded in the U.S. by Alicia Jrapko. The committee aims, first of all, to reach out to new audiences about Cuba’s contributions and the need to end the U.S. genocidal blockade. Short summaries and photos of the 2018 events are posted on its website: tinyurl.com/y7nj5ljd.

The movie “Maestra” is now available with your library card through the free streaming service Kanopy.com.