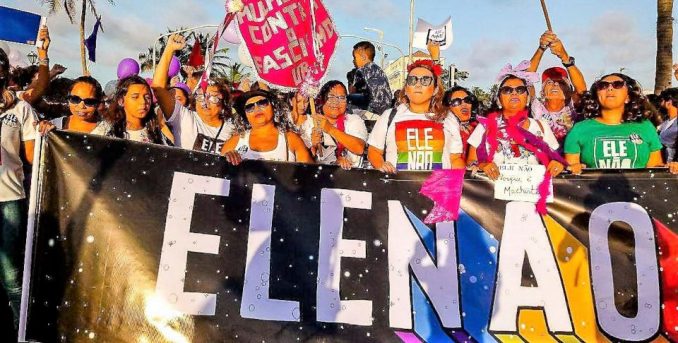 According to reports on Sept. 30 in the Brazilian web newspaper, Vermelho, about a half-million women and their supporters demonstrated in cities large and small in Brazil on Sept. 29, marching under the slogan #EleNão (not him). This was a solid rejection of the ultra-rightist presidential candidate Jair Bolsonaro, an ex-military captain who has campaigned on a misogynist, racist and anti-poor platform disguised as anti-corruption. Bolsonaro is considered to be the Brazilian military version of U.S. President Donald Trump.

Vermelho reported that there were demonstrations of 200,000 people in both São Paulo and Rio de Janeiro, with smaller but still significant demonstrations in dozens of other cities.

The latest polls show Bolsonaro neck-and-neck with Fernando Haddad for the first round of the election, set for Oct. 7. Haddad is the candidate of a coalition supported by the Workers Party and the Communist Party of Brazil. Each has about a quarter of the votes in the polls, and they are expected to face each other in the Oct. 28 run-off election. There are also elections for the National Congress and the State Assemblies.

The massive mobilization of women, led by Women United Against Bolsonaro, indicates growing hostility to the ultra-rightist Bolsonaro.