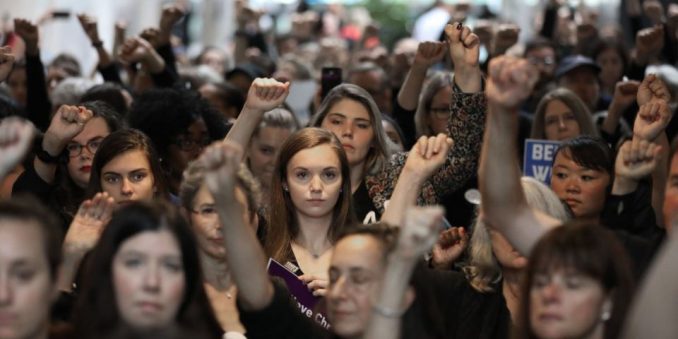 Oct. 1 — The Sept. 27 Senate Judiciary Committee hearing about the current nominee to the U.S. Supreme Court could not have been more polarized. Calm, deliberate, earnest, cooperative, though admittedly terrified, Dr. Christine Blasey Ford testified in the morning. In contrast, during the afternoon, there was high drama as Judge Brett M. Kavanaugh alternated between entitled “angry-white-man” shouting about sectarian victimization — “revenge on behalf of the Clintons” — and tearfully pouting, obviously fearful of losing his upper-class power.

It was a TV reality show on steroids. The outcome is essentially a ruling-class struggle with deep ramifications for the 327 million people currently living in the U.S.

Will Kavanaugh’s nomination to the Supreme Court by billionaire “predator in chief” Trump proceed after allegations by Dr. Blasey of a sexual assault by Kavanaugh during high school in 1982?

By the time of the hearing, many working and oppressed people had already lined up against Kavanaugh because of his anti-worker, anti-accessible health care and anti-reproductive justice stance. And hundreds of angry people, many women survivors of rape and sexual assault, marched around the halls of Congress and over to the Supreme Court to voice their anger and assert their rights against the white-male, ruling-class power structure that runs the U.S.

This class also prides itself on its social capital — its private schools; elite colleges and universities, with their closed fraternities and select drinking clubs that promote rape culture; and exclusive hunting, fishing, golf and country clubs that reek of the special advantages enjoyed by the white, moneyed 1% — as they exploit and oppress the other 99%.

Twenty-seven years ago, Anita Hill, a brilliant and brave Black woman, presisted with strong and powerful testimony against condescending, racist-sexist abuse when she reported on sexual harassment during the Clarence Thomas hearing conducted by all white male senators. The Sept. 29 New York Times quoted Hill on Kavanaugh’s rage: “‘No female candidate for a Supreme Court position would ever have the license’ to speak with such irritation and fury, she said. ‘We still don’t allow women to cry or be angry.’”

“‘Many of us are going to feel betrayed,’” she added, if the Senate ultimately confirms Kavanaugh for a lifetime appointment to the highest court in the land.

Although many magazine, newspaper and other media reports have framed the hearing as “she said, he said,” the ramifications of the hearing range far beyond that sexist phrase, in ways that connect to the entire social, cultural, economic and class system in the U.S. What surfaced during that hearing is a split in the ruling class, reflected in the different roles played by Senate Republicans and Democrats.

The Republicans have done everything in their power to ram through Kavanaugh’s appointment to the court before the midterm elections. They have tried at every turn to limit the hearing and control the outcome by putting up roadblocks to expanding the testimony as more women have come forward to name Kavanaugh as an abuser and as Kavanaugh’s drinking and gang-rape buddies have been identified. As such, the Republicans on the Senate committee are doing the bidding of the white supremacist, warmongering, male-dominated, anti-LGBTQ, Trump-aligned wing of the ruling class.

The Democrats, though just as wedded to patriarchal, imperialist, elitist capitalism, have played a more moderating role in their obvious support for Dr. Blasey. Looking for a way to reap victory in the November congressional elections, they have commended her courage and bravery in coming forward to “do her civic duty.” They have insistently called for an FBI investigation to delve into Kavanaugh’s behavior and character.

What ultimately made the Republicans cave and call on Trump to order an FBI investigation was an incident involving Sen. Jeff Flake (R-Ariz.). He had announced the morning of Sept. 28 that he would support the Kavanaugh nomination to get it out of committee and onto the Senate floor for the final vote. But then this politician, who is not running for office in the midterm election, was backed into the corner of an elevator by two women rape survivors, Ana Maria Archila and Maria Gallagher. A video of their confrontation of Flake went viral.

First Archila chastised him for supporting Kavanaugh: “What are you doing, sir?”

Furious that Flake was avoiding eye contact with her, Gallagher demanded: “Look at me when I’m talking to you.”

Shortly after that angry educational reprimand, Flake announced he would not vote to confirm Judge Kavanaugh without an FBI investigation. Trump reluctantly authorized a week-long supplemental, superficial background check of four people. For the moment, the Republicans have backed off, as did Trump, despite having attacked the FBI many times over the last two years.

‘Pretending to look for the truth’

A number of corporate media sources have questioned how this FBI investigation — limited by time and number of interviewees — will expose any additional information about Kavanaugh’s sexual abuse, blatant misogyny and flagrantly sexist behavior.

In a Sept. 30 New York Times column, Maureen Dowd wrote: “The hope that the FBI will save the day may be misplaced. In the case of Anita Hill, agents were deployed by Republicans to help smear her. … But at least we have a few more days to pretend to look for the truth.”

But working and oppressed people need to know the truth about the FBI. The FBI is a ruthless tool that the ruling class uses to enforce state power.

Referring to both the FBI and the CIA in a July 25 WW article, Fred Goldstein wrote: “These agencies are two of the greatest enemies of the workers and oppressed at home and abroad. The FBI has infiltrated and framed up generations of communists, socialists, African-American civil rights organizations and liberation groups. It has hunted them down on their jobs and in their homes, imprisoned and even killed them.”

Since the hearing and the announcement of the FBI investigation, big business media have been speculating about their impact on the midterm elections. Will the Republicans’ begrudging, last-minute call for the FBI help or hinder voting by Trump’s misogynist base or by women? Did the Republicans effectively hoodwink women voters by hiring an experienced sex crimes prosecutor to interrogate Dr. Blasey? That was a ploy to save the all-male Republicans from exposing the blatant sexist-racist bias they showed during their ruthless examination of Anita Hill.

Yet another question posed by the ruling-class media is: Will Kavanaugh’s temper tantrum and tears — a display of “white-male-victim” behavior often voiced by Trump — disqualify him from the judicial arm of the federal goverment — the one out of three branches of the state that is supposedly sacrosanct and above all “impartial”?

Supreme Court justices must present themselves as nonpartisan and above reproach. Yale law professor Judith Resnik speculated that Kavanaugh’s antics at the hearing “could leave the Supreme Court ‘under a cloud of politics and scandal from which it would not recover for decades.’” (NY Times, Sept. 29)

It’s possible Kavanaugh’s nomination may be a bust, even by capitalist “democratic” standards.

Reactions to the hearing and its aftermath are showing how pivotal these may be in the ensuing struggle against sexual abuse.

The Sept. 9 Sacramento Bee observed: Kavanaugh “looked like an entitled, privileged white male, whining because he’s unaccustomed to losing anything — much less a lifetime appointment to the nation’s highest court that he always expected to get.”

Later the article opined: “That Republicans probably will confirm Kavanaugh to the Supreme Court despite what happened on Thursday [Sept. 27] says something about this country, namely that white male privilege still means a lot. But it also says something that so many Americans saw through his act.”

Hundreds of people reached out during the hearing to Planned Parenthood and the Rape, Abuse & Incest National Network in record numbers. The former reported “more traffic on Thursday than all year,” while calls to RAINN jumped by 201 percent. (The Guardian, Sept. 30) An obvious conclusion is that there are many, many survivors — who are desperately in need of help and support.

How will this particular ruling-class crisis be resolved? Don’t look for predictions here. It’s too close to call. Will Trump triumph or will he be forced to pick another nominee? It’s possible that squeaky-clean Judge Amy Barrett could be next in line. Her racist, sexist, anti- LGBTQ, anti-worker, pro-ruling-class credentials are equally conservative. A Catholic, Barrett is on record as being anti-abortion.

Corporate media are speculating nonstop on the midterm elections. But the question of what that reflects goes much deeper than the impact of this congressional hearing. To begin with, millions of people of color, those living in rural areas, the incarcerated and the formerly incarcerated, as well as undocumented immigrants, have been closed out of all elections by right-wing, anti-voter initiatives. They are not allowed to vote or have lost that right. That’s proof the continued racist repression of voting rights invalidates the legitimacy of “democratic elections” in the U.S.

But one thing is certain: The violent crime of sexual assault has been dramatically revealed, and it is now firmly planted in the public arena. There is no going back. Ford’s narrative has brought stark attention to the existence of sexual abuse and violence against women in all realms of life.

Women survivors can only move forward on all fronts, their arms linked with comrades of other genders in united resistance with all those who have suffered the brutal violence of patriarchy, racism and capitalist oppression. This is the path of solidarity needed to smash the capitalist state to smithereens and create a new socialist society.