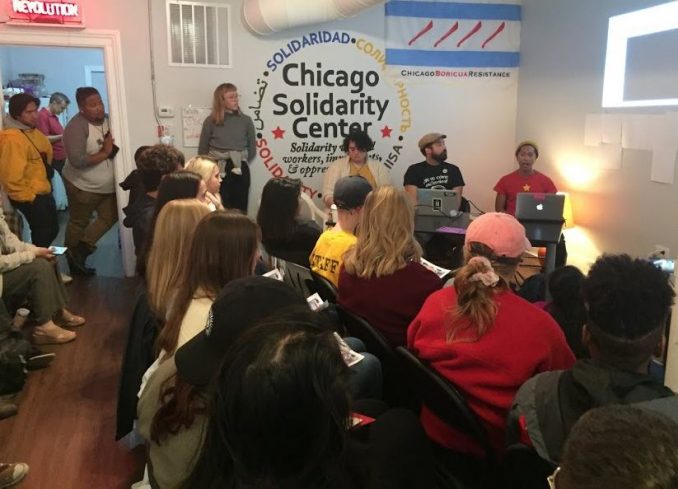 Dozens of Chicago activists gathered for a Sept. 30 public forum on current anti-colonial struggles in Puerto Rico, the Philippines and Palestine to discuss the upcoming International Tribunal on U.S. Colonial Crimes in Puerto Rico. These countries all share a common history of colonial oppression, and the people of each offer inspiring examples, both past and current, of struggles for liberation.

Today, Puerto Rico is still a colony of the U.S.; while the Philippines is nominally independent, but in reality is a neocolony of the United States; and Palestine is occupied by Israel. Representatives of the Puerto Rico Tribunal, Chicago Boricua Resistance, Anakbayan Chicago, Chicago Workers World Party, and a Palestinian scholar spoke on these interconnected struggles.

“As people living in the United States, we have a special duty to support these liberation struggles,” Kaitlyn Griffith, Chicago WWP member, said in introducing the panel. “It is the U.S. that provides military aid to Israel and the Philippines, bankrupted Puerto Rico and failed to provide real aid during Hurricane Maria.”

Berta Joubert-Ceci, a key organizer of the Tribunal, provided detailed background on the U.S. policies and economic warfare that contributed to the unnatural disaster that came in the wake of Hurricane Maria. “The island and its people have been exploited for the benefit of the U.S. ruling class through low wages, high-interest debt and plunder of natural resources — all before Maria hit,” Joubert-Ceci pointed out. “The Tribunal seeks to directly give voice to the people of Puerto Rico, to hear their testimony and to place the blame for these colonial crimes at the feet of the United States.”

The International Tribunal on U.S. Crimes in Puerto Rico is being held on Oct. 27 in New York City. For more information, visit PuertoRicoTribunal.org. To help contribute to cover the costs of the Tribunal, visit gofundme.com/TribunalPuertoRico.

Miguel Alvelo, an activist with Chicago Boricua Resistance, an organization of Puerto Ricans opposed to the Fiscal Control Board, highlighted actions that Puerto Ricans in the diaspora can take in solidarity with those living on the island. “Puerto Rico constitutes a people divided across an ocean by the forces of imperialism, colonialism and capitalism,” Alvelo said. “We always refer to the people on the ground in Puerto Rico to inform our actions. Using this as a guiding force, the diaspora can engage in advocacy, direct action, education, physical support, financial support and solidarity network building, among many other things.”

Julian Ignacio, secretary general of Anakbayan Chicago, a comprehensive organization of Filipino youth working to support the national democratic struggle in the Philippines, spoke on the current movement against the dictatorship of President Rodrigo Duterte. “The so-called ‘war on drugs’ in the Philippines is a war on the poor, workers, Muslims and the people’s movements, and the U.S. provides millions in funds that support these policies,” Ignacio said. “But there is a strong movement against Duterte and bureaucrat-capitalism being led by the Communist Party of the Philippines and the National Democratic Movement.”

Ignacio also highlighted the struggle of Filipino NutriAsia workers, who became the target of anti-worker violence at the hands of police when they went on strike against exploitative conditions. You can donate to support the NutriAsia campaign here: tinyurl.com/supportNutriAsiaworkers.

Addressing the special connection between the Philippines and Puerto Rico, Alvelo said, “We share the same colonial masters — both Spain in the past and the United States now. We see solidarity as absolutely essential in our struggles; we are both islands!” One of the ways the Puerto Rican diaspora is organizing to support the island is through Solidarity Brigades, which you can support at redapoyomutuo.org/donaciones.

Samer Owaida, a Chicago-based Palestinian activist and scholar, presented a slideshow displaying original research that he helped conduct while in Palestine during the summer. He used both quantitative and qualitative methods to investigate the environmental effects of the Israeli occupation and its consequences on Palestinians.