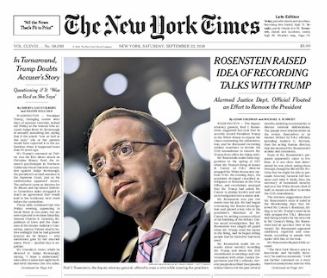 The Times gave a classic lesson — never rely on the liberal elements in the ruling class to fight political reaction.

Sept. 23 — Millions of people who hate Donald Trump woke up yesterday morning to find a huge picture of Rod Rosenstein, deputy attorney general of the U.S., on the front page of the New York Times. Next to the picture was a two-column lead story, with the headline: “Rosenstein Raised Idea of Recording Talks with Trump.”

The subhead read, “Alarmed Justice Dept. Official Floated an Effort to Remove the President.” As we shall see, the story is based upon the scantiest of evidence.

The Times story amounted to an attack on one of Trump’s arch enemies — the Justice Dept. official who oversees all aspects of the Mueller investigation into “Russian meddling” in U.S. elections. The story gave a big weapon to Trump and his allies in the struggle against Mueller. There is now a chorus of right-wing voices calling for Rosenstein’s dismissal and asserting that this is further evidence of a plot against Trump.

The Times, the establishment voice of liberalism, has waged an editorial war for nearly two years against the Trump administration and denounced most of his reactionary domestic measures.

Why would the Times help Trump?

So why would the liberal New York Times attack one of Trump’s arch enemies so publicly and with such a high-profile story? After all, the New York Times has been denounced by Trump as “fake news” and the “enemy of the people.”

The answer is simple: circulation, ratings, money, profit. The Times threw its politics overboard for the moment because it is in a desperate struggle to boost its profits. It is under pressure from the Washington Post and in a fierce intercorporate struggle for the capitalist news market.

This gave a classic lesson to all progressives and radicals: Never rely on the liberal elements in the ruling class to fight political reaction.

The Mueller investigation presents a great danger to Trump. It is only in part an investigation into the administration’s alleged collaboration with the Russians during the elections of 2016. In addition, Mueller is also looking into corruption and Trump’s finances, which include money laundering, illicit financial dealings with Deutsche Bank and real estate dealings by himself, his son and son-in-law, among other things.

(Of course, the anti-Russia drum beat in the Times and in sections of the ruling class is a reactionary justification for the Pentagon’s military buildup.)

Two of Trump’s closest associates — Paul Manafort and George Papadopoulos — have “flipped” and pleaded guilty to multiple crimes of money laundering, tax evasion, bank fraud, etc., and are now cooperating with Mueller. It is no wonder, then, that Trump has become obsessed with destroying the Mueller investigation. Firing Rosenstein, who has pledged to protect the investigation, would be the first step on that path.

Almost every time Trump takes the podium at a rally or wakes up in the morning to tweet his venom, he attacks the investigation as a “witch hunt,” part of the conspiracy of a so-called “deep state,” the Justice Department and the FBI.

Of course, the FBI and the Justice Department are the arch enemies of the workers and the oppressed, who would have to destroy these repressive organs along with the rest of the capitalist state as a prelude to running the economy and society as a whole in their own interests.

But at present what the Times is inciting is the firing of Rosenstein, which would be a key step in destroying the investigation — an investigation the Times has championed all along as a way to get rid of Trump.

Jeff Bezos, CEO of Amazon, bought the Washington Post in 2013. Since the election of Donald Trump, the Washington Post has become the go-to publication for exposés of Trump, despite the Times’ supremacy as the dominant newspaper empire of U.S. imperialism.

Billionaire Bezos is determined to overtake the Times, and he has the deep pockets to do it. This was made clear in an NBC News article, “The Most Important Competition in Newspapers Heats Up,” last Dec. 28:

“Under its free-spending owner, Jeff Bezos, the CEO of Amazon, The Post has hired more than 100 new reporters and editors, and rebuilt its presence outside of Washington. It has become a much bigger part of the digital conversation on public affairs.

“Nikki Usher, an associate professor at George Washington University, opined: ‘You do see people who are opposed to the Trump administration making The Post now their first read. Maybe The Post is optimizing for anger a little bit better.’ ”

The competition between these two mouthpieces of the capitalist class means fighting for circulation, for an international audience, for page views, for website visits and ultimately for advertising rates and profits.

According to the Sept. 22 Times report: “Mr. Rosenstein made the remarks about secretly recording Mr. Trump and about the 25th Amendment [to remove Trump] in meetings and conversations with other Justice Department and F.B.I. officials. Several people described the episodes in interviews over the past several months, insisting on anonymity to discuss internal deliberations. The people were briefed either on the events themselves or on memos written by F.B.I. officials, including Andrew G. McCabe, then the acting bureau director, that documented Mr. Rosenstein’s actions and comments.” [Author’s emphsis]

But seven paragraphs into the story, the Times briefly cites the only person who was in the room and heard the remarks as saying they were sarcastic!

“A Justice Department spokeswoman also provided a statement from a person who was present when Mr. Rosenstein proposed wearing a wire. The person, who would not be named, acknowledged the remark but said Mr. Rosenstein made it sarcastically.” [Author’s emphasis]

So these remarks were not described by someone who heard them as “proposals” but as sarcasm. All the additional sources are third-hand, people allegedly briefed about the “proposals.”

For the Times, this is far below its usual standards for sourcing this important an article.

The rush for ratings puts one in mind of Les Moonves of the “liberal” CBS TV empire, who commented on Trump’s presidential campaign during its upswing that it might not be good for the country, but “it’s damn good for CBS. … Man, who would have expected the ride we’re all having right now? … The money’s rolling in and this is fun.” (Hollywood Reporter, Feb. 29, 2016)

Although Moonves implied he was opposed to Trump, his network, along with all the other TV networks and cable channels, gave Trump millions of dollars worth of free publicity. They did this because Trump had high ratings and pulled in viewers. (This is the same Les Moonves who is now being fired by CBS for sexual abuse of multiple women.) For the network, Trump was a talented carnival barker and knew how to hold an audience — with racism, misogyny, bigotry and militaristic belligerence.

The political lesson of all this is that for the ruling class and their paid propagandists, money trumps politics. Liberals and moderates and the Democratic Party corporate leadership cannot and will not stand up to capitalist reaction. At best, they will make a literary or rhetorical protest.

When push comes to shove, the workers and oppressed must have their own independent, struggle-oriented organizations to combat bourgeois reaction.

Liberals and radicals may get a sense of vindication and satisfaction when they read or hear about the exposures of Trump and the right wing in the media, in the Congress or in the electoral struggle. But that is of little consequence to the millions of undocumented workers who are being hunted down, their families forcibly separated.

Exposures alone will not stop Immigration and Customs Enforcement from rounding up undocumented workers on the job or in their homes. Parents are being arrested when they come to see their children. Countless immigrants will now be denied Green Cards if they have ever accepted any form of government assistance. And millions are forced to live in the shadows because they fear ICE or the U.S. Border Patrol.

For the sake of profit, “liberal media” like CBS, NBC, the New York Times, the Washington Post, as well as the Democratic Party hierarchy, will carry on with their elections and their sterile debates. While they are exercising so-called “democracy,” they will stand by passively while African-American and Latinx people are driven into the prison system or ICE detentions centersn and suffocate behind bars, tortured by prison guards and prison administrations.

Mass incarceration does not touch the lives of those who sit on the board of directors of the New York Times or of the Washington Post. They may write “sympathetic” editorials but never once really stand up to the racist jailors, the sheriffs, the sadists and fascists at the border, or those in the police precincts.

And they would not dare call upon the masses to resist. On the contrary, when there is real resistance — such as in Ferguson, Mo., in the wake of a brutal police execution of a young African-American man in 2014 — the ruling-class liberals rush in to derail the struggle and are the first to denounce “violence” by the people.

This latest episode, with the New York Times setting up Trump’s enemy Rod Rosenstein, shows the whole world how quickly the bourgeoisie will toss aside their veneer of liberalism for the sake of enhancing or protecting their fortunes.

The workers and oppressed and all who hate the Trump reaction should take this as a signal to accelerate their independent organization and to build grassroots resistance in the workplace, in communities, on the campuses and in the prisons.

We the exploited, who suffer the oppression, can only rely on ourselves and our class.