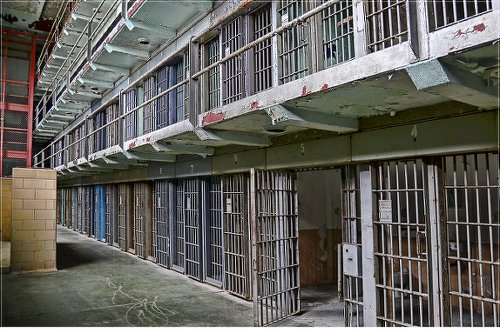 Thousands of prisoners across Pennsylvania have been confined to their cells since Aug. 29. That’s when the state’s Department of Corrections Secretary John Wetzel declared an indefinite lockdown of all facilities under his jurisdiction.

The lockdown, which began just days into the National Prison Strike (Aug. 21 to Sept. 9) is the most blatant in a series of repressive tactics that the state has resorted to in response to the strike. It was timed to preempt some major strike actions planned by prisoners.

Attacks on right to legal counsel

One week into the lockdown, Wetzel appeared alongside Pennsylvania Gov. Tom Wolf, who announced a sweeping series of new policies that constitute an unprecedented crackdown on the rights of prisoners. Among the many petty and punitive policies, like banning prisoners from taking photos with their visitors, there are also new measures that will systematically deny prisoners their right to privacy with legal counsel.

All correspondence sent to prisoners is now to be transported to a third-party facility in Florida, where it will be opened and photocopied before copies are sent to the respective prisons to be delivered to the intended recipients. Since prison officials are at least in theory not allowed to open any mail containing legal correspondence, except in the presence of its recipient, a farcical new method has been introduced to get around this protection.

A prisoner in one state facility described how this is done: The mail is put into a laboratory glovebox meant for handling hazardous material where it is opened. The envelope and contents are then passed to another corrections officer wearing neoprene gloves, who photocopies them. The copies are then given to the prisoner, while the originals are kept in possession of the prison authorities for 15 days. After that, the authorities say they will be destroyed.

In both theory and practice, this arrangement shatters any remaining rights that prisoners have to private communications with counsel. Prison officials and corrections officers will now know ahead of time whenever a prisoner is planning to meet or correspond with lawyers, as well as the legal strategies they plan to use to win their case. “And since the prisons are a wing of the District Attorney’s office, this constitutes an egregious violation of our rights,” says Bryant Arroyo, a jailhouse lawyer and environmentalist at SCI Frackville with a history of successfully challenging DOC abuses.

The DOC claims that a number of prison staff have fallen ill in recent weeks, mostly in the western region of the state. The first such accounts began as early as Aug. 6, but skepticism has met the few details that have been disclosed. No clear pattern of illness has emerged. In one incident, an officer was administered Narcan, used to treat emergency overdoses, but it is not clear under what circumstances.

Another case that allegedly contributed to the lockdown involved a guard escorting a prisoner who, he claimed, “appeared” to be under the influence of a drug. Later, that guard developed “bumps around his forehead” and went to the hospital for a few short hours before being discharged. The DOC is using these minor incidents to suggest that a widespread and sudden health crisis among staff is the reason for the unprecedented statewide lockdown.

Actually, there is a widespread health crisis in prisons across the country, which is one of the factors that incited the national strike. Toxic water, unsafe temperature levels and denial of medical care are all extremely dangerous conditions that are caused by DOC policies, not ameliorated by them.

This lockdown is just the latest in a series of new instances of repression that prisoners have reported in recent months. Workers World newspaper itself has been notified that three recent issues have been banned from distribution in Pennsylvania facilities, where over 300 inmates are subscribers and perhaps thousands are readers. The reason given for this censorship — the third such incident of Workers World being banned in Pennsylvania prisons this year — was its reporting on the National Prison Strike.

For weeks running up to the first day of the strike, the ion scanner that supposedly tests for toxic or illegal substances began issuing dozens of false positives at SCI Frackville. Guards turned away upwards of 20 visitors per day, which only inflamed tensions between inmates and officers. Since the lockdown, inmates at Frackville report they’re being served inedible food (rotten bananas, for instance, and cold, watery rice with broccoli and cauliflower mashed into it) and experience delays in the delivery of commissary food — which they have to pay for.

This summer also brought the long- awaited closure of the notorious SCI Graterford, site of one of the worst toxic water conditions in the state. Inmates were moved to a new $400 million facility called SCI Phoenix, only to be met by guards who had destroyed their property, smearing their clothes with food and dirt and shredding their mail and legal paperwork while it was in transport. Multiple prisoners reported their property had been vandalized with scrawled racial slurs and drawings of swastikas. At least one inmate was hospitalized because of inconsistent access to his needed medication.

Among those moved to SCI Phoenix was Michael Africa Sr., one of nine members of the MOVE Organization who was arrested in 1978 and falsely convicted of shooting a Philly cop. He is one of several remaining MOVE 9 members who are finally up for parole in the coming months. The lockdown not only coincides with Michael Africa’s next parole hearing, which is just weeks away, but also preempted a major strike action. Prisoners had intended to launch a boycott of telephone and commissary purchases on Sept. 2.

Since the Aug. 29 lockdown, prisoners have been protesting by chanting and banging on their doors in unison for hours on end. Some cell blocks have now also started refusing food. That same tactic was deployed by prisoners held in the Pennsylvania Industrial Correctional Center, who launched a hunger strike earlier this summer to protest a lockdown.

When Wetzel and Wolf announced their sweeping new policy changes, no announcement was made in Spanish or any other language, despite the state’s sizable non-English speaking prison population, according to Bryant Arroyo, who is bilingual.

Governor Wolf is one of several Democrats who assumed office with a supposedly “progressive” agenda — and have since entered into high-profile partnerships with reactionary white supremacists. Wolf came into power alongside Philadelphia Mayor Jim Kenney, who was so eager to remove protest encampments springing up around the city that he empowered the police to beat demonstrators and destroy their property. He even brought out bulldozers to dig up the earth all around City Hall the same morning that the encampments were removed.

The new prison policy regarding legal mail is a huge boon for chief prosecutor Larry Krasner, whose district attorney office has entered into an obvious pact with the Fraternal Order of Police to keep Mumia Abu-Jamal in prison until the conditions there kill him. Lawyers for Mumia, who is held at SCI Mahanoy, are in an ongoing struggle with the DA’s office over the release of files that would prove prosecutorial and judicial misconduct in Mumia’s case. Krasner’s office has either destroyed the documents or is withholding them from the court. That should demonstrate just how dangerous it is that all legal mail for prisoners across the state will now basically be up for inspection by prosecutors and prison officials.

Workers World will continue to protest on behalf of the prisoners whose right to read this publication is being unlawfully denied. Additionally, the Abolitionist Law Center asks that any reports of abuse or violations of rights related to the lockdown be reported to ­[email protected]