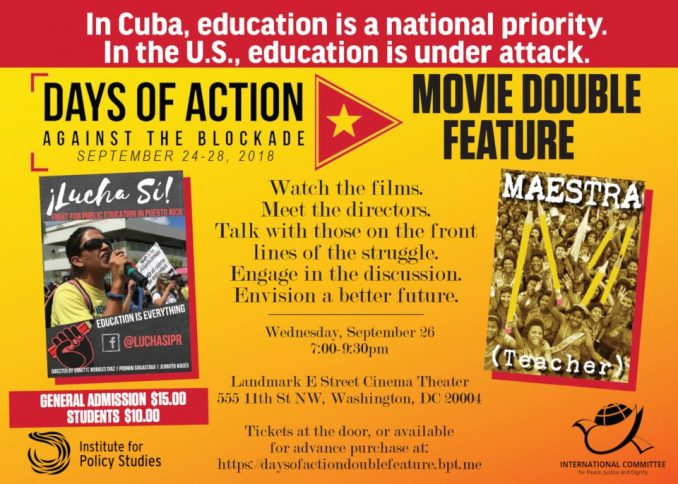 Washington, D.C. — Education is under attack in both the United States and its colony of Puerto Rico. In socialist Cuba, however, education is a national priority.

The International Committee for Peace, Justice and Dignity will examine this contrast in its Days of Action against the U.S. blockade of Cuba Sept. 24-28 in Washington, D.C.

On Wednesday, Sept. 26, a double-feature film screening will premiere “Lucha Sí!” about the fight for public education in Puerto Rico, along with “Maestra” (teacher), the story of Cuba’s 1961 National Literacy Campaign. The women filmmakers of the productions will engage in a postviewing discussion, along with actual participants in the struggles depicted on screen.

Direct from Puerto Rico, “Lucha Sí!” co-director Jinnette Morales will bring the frontline struggle of Puerto Rican teachers, students and parents to Washington. More than Hurricane María, the Fiscal Control Board and Puerto Rico’s colonial U.S. handcuffs are endangering all levels of education, particularly for children with disabilities.

From Cuba, Norma Guillard joins the discussion. She is one of the nine women whose interviews in “Maestra” are combined with archival footage and still pictures to bring alive Cuba’s revolutionary transformation and what it has meant for the lives and futures of these young women. A Cuban of African descent, Guillard, now a retired psychologist, has played a role in issues of gender, education against homophobia and prevention of HIV/AIDS. She is a poet as well as a theater and documentary producer.

Space at the Landmark E Street Cinema, where these films will be shown, is limited. Tickets are available online at tinyurl.com/ydbtzgc8/.

Other activities during the week include public meetings at the University of Maryland’s Nyumburu Cultural Center and Howard University; a screening for high school students promoted by a parent-teacher organization; and visits to congressional offices showing the strong popular support for ending the unilateral U.S. economic, financial and commercial blockade of Cuba. See the schedule of activities and trailers for the films at tinyurl.com/y7cendu8/.

A high-level Cuban delegation will be in New York for the opening of the 73rd United Nations General Assembly. Organizations in solidarity with the Cuban Revolution are planning a public event on Sept. 26 at the historic Riverside Church, near Harlem, to welcome and hear from the Cuban delegation. In September 2000, Fidel Castro spoke at Riverside Church while at the U.N. for the Millenium Summit.

Harlem has held a special place in U.S.-Cuba relations since the Hotel Theresa opened its doors and welcomed Fidel Castro and the Cuban delegation in 1960. They went to Harlem after the delegation was disrespected by the racist Hotel Shelburne in midtown Manhattan, and it was there that Fidel Castro met Malcolm X.

Cuba’s revolution has been and still is a beacon for the world’s oppressed people, particularly Black and Latinx communities in the U.S. It is not forgotten that Cuba allied with Angola at Cuito Cuanavale to decisively defeat invading troops from the white supremacist and U.S.-backed South African apartheid regime. Cuba exports literacy with its “Yo, sí puedo” teachers and brings health care, training of doctors and new medicines to the people of the world.

It was Cuba’s Fidel Castro and Bolivarian Venezuela’s Hugo Chávez who developed a model of solidarity trade for countries stunted and diminished by centuries of colonialism, slavery and economic exploitation. That model promotes mutual development through cooperation and barter to avoid the imperialist financial system.

U.S. imperialism is sharpening its knives to undo the advances made by the people of Latin America and the Caribbean. This makes an event like the one planned for Sept. 26 in New York more than just a meeting. It will be an important demonstration of solidarity.

Advance tickets are required; a $5 donation is requested. Ticket distribution centers are: