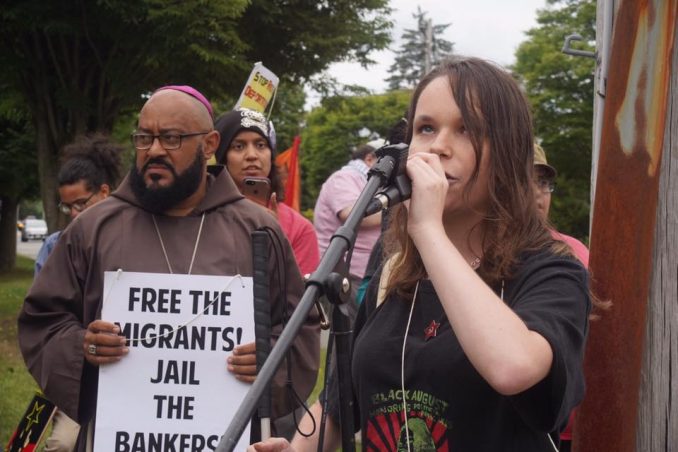 Dartmouth, Mass. — A crowd of 30 people gathered at the entrance to the Bristol County Jail here on Sept. 8 for a noise demonstration. It was called by the Boston chapter of FIRE (Fight for Im/migrants and Refugees Everywhere) in solidarity with the national prison strike scheduled to end the next day, as well as with earlier acts of resistance inside Bristol County Jail itself. Most of the demonstrators travelled from Boston or Providence, R.I., to show solidarity with prisoners in the jail.

The rally began with a land acknowledgment by Nat Heathman of the United American Indians of New England, who emphasized that the prisons in this country are illegitimate and against the beliefs of the rightful owners of the land they are built on.

The demonstrators took turns giving speeches aimed at reaching the prisoners. A number of different organizations were represented, including Steelworkers Local 8751, Boston School Bus Drivers; the Providence chapter of the Incarcerated Workers Organizing Committee; the Party for Socialism and Liberation; Justice4Siham; the Stonewall Warriors; Workers World Party; and more.

A notable speaker was Bishop Filipe Teixeira of the heavily im/migrant St. Martin De Porres parish in Brockton, Mass., who has a long history of work in Bristol County Jail and other facilities. He drew parallels between the treatment of prisoners and migrants today and the crimes of the Nazi regime in Germany.

Two of the speakers led the demonstrators in singing “Which Side Are You On?” and “Solidarity Forever.” Recognizing that prisoners are also members of the working class, both these songs come from the early 20th century union movement, with the former updated during the 1960s’ Civil Rights Movement.

Bristol County Jail has a long history of abuse and terrible conditions, particularly around medical neglect and the use of chain gangs.

At the end of July, U.S. Immigration and Customs Enforcement detainees in Bristol County Jail went on hunger strike to protest inhumane living conditions such as inedible food, medical neglect and exploitative phone and commissary rates. They were joined by prisoners in the general population in a powerful show of solidarity.

Siham Byah, a Moroccan activist who spent two months in the ICE detention center in Bristol County before being deported, phoned in to the rally: “It is a facility that takes pride in mistreating and dehumanizing its inmates. … Health care is nonexistent. The food is inedible. It’s not something you would give an animal, never mind people. We did not see the shadow of a fruit or vegetable unless you have a special order from a doctor, and even then you get a rotten apple once a day. People have their basic rights stripped away from them. I certainly didn’t feel like a human being when I was kept in there.”

Despite the presence of guards with flak jackets, three cars of state troopers patrolling the area and a K9 unit with barking dogs, the demonstrators refused to be intimidated and held a two-hour rally outside the entrance, using a powerful sound system. They had been barred entry onto the property.

Thomas Hodgson, the notorious, fascistic sheriff of Bristol County, recently traveled to Washington, D.C., to give an award to President Trump. He arrived at the jail shortly after the rally began, wearing an ICE shirt.

Several speakers confronted Hodgson directly, calling attention to the fact that he was visibly laughing and making mocking faces as speakers exposed the crimes committed in his facilities.

The sheriff also made headlines earlier this year when he offered to send his prisoners to the Mexican border to be used as slave labor in the construction of Trump’s racist border wall.