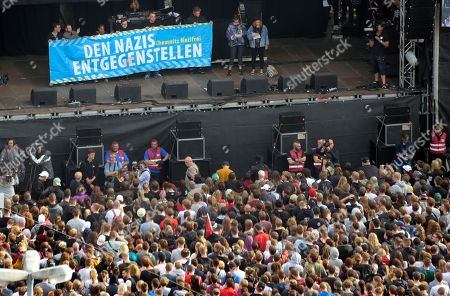 A banner saying “Confront the Nazis” waved over a crowd of 65,000 people who gathered for an anti-racism rally and concert on Sept. 3 near the Karl Marx monument in Chemnitz, Germany.  The day’s events were held in opposition to recent far-right anti-immigrant mobilizations and violence in the city. The activities were held under the slogan “We are the majority!”

Chants of “Nazis out!” rang out. Anti-fascist and anti-racist signs peppered the large crowd, comprised of mostly young people.  Participants communicated a strong message of solidarity with immigrants. Many of the bands’ lyrics conveyed anti-xenophobic and anti-racist messages.

Organizers, among them members of anti-fascist groups, aimed to show that there was “no place for Nazis in Chemnitz.”  They adamantly stated they didn’t want the activities to be called a “festival,” but an opportunity “to show solidarity with all those who have been attacked by neo-Nazis.” “Racism should not be left uncontested on the street,” they stressed. (cnn.com, Sept. 3)

The rally began with a moment of silence for Daniel Hillig, an anti-fascist  whose murder on Aug. 26 was wrongly blamed on refugees in false rumors spread by social media and some press.   Ultra-right forces, supported by the Alternative for Germany (AfD) party and the xenophobic Pegida movement, used his death as an excuse to aggressively hunt down and brutally attack mainly Arab and African immigrants over several days.

In response, 5,000 anti-fascists, mobilized under the slogan of “Heart, not hate,” linked arms and chanted “Refugees are wanted here!” and other anti-fascist slogans. They militantly confronted the Nazis at several locations as they marched on Sept. 1 in Chemnitz.