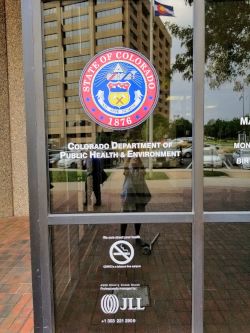 Over 500 Colorado environmentalists, officials and residents packed the meeting of the state Air Quality Control Commission on Aug. 16. They were demanding that the environmental bar on air pollution be raised and emphatically opposed any federal rollback on fuel economy standards.

Environmentalists present were outraged by the Trump administration’s attack on national auto safety emissions standards ending the gradual toughening of federal standards that had been put in place over 40 years to reduce tailpipe emissions of “greenhouse gases.” The rollback also threatens to revoke a waiver that allows California to have standards even tougher than the national regulations for controlling vehicle emissions and air pollution.

The Denver meeting was held to hear public opinion on a June 19 executive order by Gov. Hickenlooper that mandated a low-emissions vehicle program to reduce air pollution from cars and light trucks. This proposal — pushing back against Trump directives — was modelled on California’s 52 strict auto emissions regulations, the toughest in the U.S. The Colorado proposal would affect new cars after Jan. 1, 2022, and be stronger than current Environmental Protection Agency standards, with the aim of reducing greenhouse gas emissions by 26 percent by 2025.

The audience came both to support this new policy and to improve and strengthen it by including ZEVs (zero emission vehicles) in the plan. These are in the California codes, but were not initially to be in the Colorado program. Statements from numerous speakers from across the state made clear that there was overwhelming support for including ZEVs in the Colorado program.

Car emissions, which nationally cause 25 percent of air pollution, add to the environmental problems in Colorado. One major impact cited by speakers was the increasing temperatures that cause loss of from 30 to 60 percent of the snow pack, which then affects Colorado’s water supply, winter sports and ski industry. This is in addition to extreme flooding, fires, and the human and animal health problems stemming from ozone and other auto pollutants.

The August public hearing will be followed by another in November to review the final program of action, which must be in place by January 2019, in time for industry planning for 2022 cars.