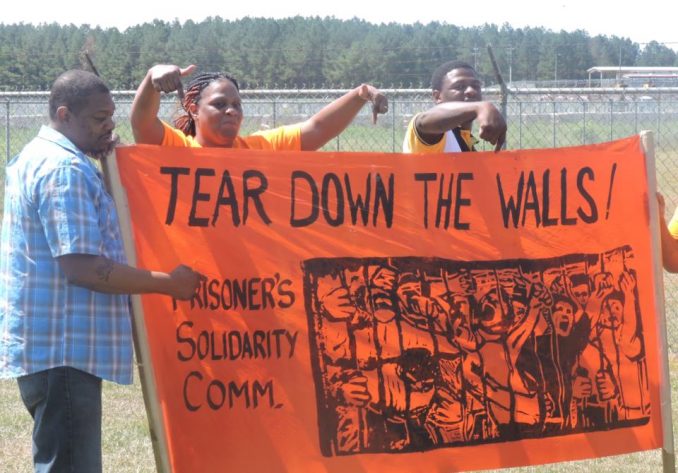 Bishopville, S.C. — A rally was held Aug. 25 at the gates of Lee Correctional Facility, an infamous prison in Bishopville, S.C., to remember the deaths of seven inmates killed in April in a riot encouraged by prison staff.  During the melee, the guards did nothing to stop the violence and, after it was over, did little to render aid to the injured inmates. It has been alleged that the guards provoked the fight and had been stoking tensions in the jail for months.

About 50 people, mainly from South Carolina but also from Georgia and North Carolina, attended the rally.  It opened with libations for each of the seven men killed. As each name was read, a cross was placed on the side of the road in front of the prison.  After a few minutes of silence for the men killed, relatives took the microphone to express their anger and hurt at what was done to their sons and nephews.  Then people from the sponsoring organizations spoke, chanted, and read and performed poetry.

The 10 demands of the current prison strike were read and explained as well.

Even without this kind of violence, the day-to-day routine violence in many U.S. prisons is dehumanizing. As one speaker noted, it is worse than the way animals are treated in dog pounds.  Punishments such as solitary are meted out at the discretion of a guard. The process to appeal a punishment is now almost nonexistent. The administration has many ways to show displeasure over any particular inmate, and the ones that attempt to stand up for their rights must be prepared to suffer.

The rally was organized by the Free South Carolina movement, composed of friends and relatives of prisoners, ex-prisoners and prison activists. It was supported by a number of different groups, including Workers World Party, the Party for Socialism and Liberation, the Socialist Party of South Carolina and Food Not Bombs of Greenville, S.C.