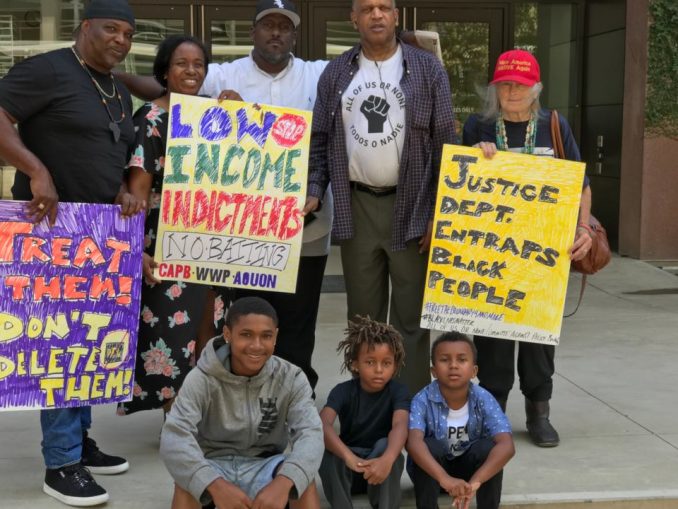 At an Aug. 10 protest for the release of the Boundary 4 and More at the San Diego Courthouse, showing solidarity are (standing, left to right) Curtis Howard of All of Us or None, Mychal Odom of Workers World Party and Committee Against Police Brutality, Dennis Malone of All of Us or None, and Mary Lou Finley of CAPB and WWP, along with others.

San Diego — A coalition of activists from Workers World Party-San Diego, Committee Against Police Brutality, All of Us Or None/San Diego and community members turned out to support the Boundary Four and More on Aug. 10. This case concerns African-American and Latinx men and an Asian-American woman who were roped into a conspiracy about alleged drugs sales.

Suspicions about the case raised by Curtis Howard, formerly incarcerated activist and author, were confirmed at the indictment hearing in San Diego’s federal courthouse.

Seventeen people have been charged with conspiracy to distribute crack cocaine, possession with intent to distribute crack cocaine and conspiracy to launder money. All these charges might seem convincing to many people, but a visit to the federal courthouse revealed a different story. There were no kingpins in the courtroom. All of the defendants wore green and khaki uniforms worn by low-risk offenders.

What is more, supporters of the defendants saw at least two of them enter the courtroom in wheelchairs. Another, Anthony Rhodes, has been in the infirmary, and is experiencing trouble with his vision. Rhodes’ attorney requested access to the defendant, as he became inaccessible to her when he was moved for health problems.

A complete display of the prosecution’s evidence was not expected that day. However, the evidence produced was discernibly thin — and, at best, would normally have been grounds for a case in state court. The prosecution admitted it was also complex.

Studies have shown that as many as 90 percent of the crack cocaine cases sent to federal court have involved Black defendants, despite Black people using or selling the drug at a much lower rate than whites. The general notion that Black people are locked up for selling crack because crack is a “black drug” is not true.

Beginning in the 1980s, crack was stigmatized as a Black drug, which allowed the courts to easily set mandatory minimums in crack sales cases. Black people comprise a majority of those both charged with state offenses and referred to federal court and those convicted. The mass incarceration of Black and Brown people is a political and economic crisis, and definitely not one of moral deficiency.

In the past, this case would have been referred to the state legal system, but it appears that prosecutors are aiming to usurp state legislation with federal prosecutions. At the dawn of the Trump administration, Alex Shephard prophetically reported in the New Republic: “Donald Trump and Jeff Sessions are going to use an imaginary crime wave to launch a crackdown.” According to Howard, these defendants are mere pawns in that game.

District Judge Gonzalo Curiel is presiding over the case. He was appointed to the bench in 2012 by President Barack Obama and is a member of an African-American fraternity. Curiel also presided over the Trump University case.

In a similar case in 2017, the community rallied behind a defendant roped into a federal indictment that involved no physical evidence, only telecommunications. The judge in that case, also an Obama appointee, professed a belief in treatment and community service over incarceration for the convicted. The young man the community rallied around was released. Many activists hope for a similar outcome in this case.

Attending the hearing is only the first step for the coalition. Outside the courthouse, protesters held signs reading: “Treat them! Don’t Delete Them!” “Stop Low-income Indictments!” and “Justice Department Entraps Black People!” The coalition demands the release of the defendants and, upon their release, that housing, health care and employment be secured for them.