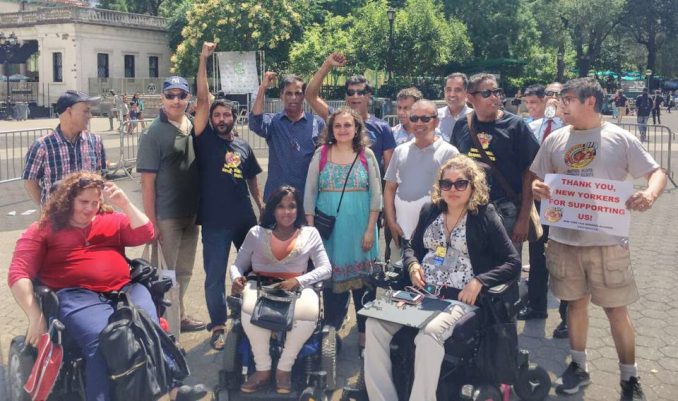 In New York City within the last year, six taxi and “black car” limo drivers killed themselves — in financial desperation at no longer being able to support their families or pay their debts.

The yellow and green cab, livery and black car drivers were being run into the ground by the advent of Uber and Lyft rides, cheated by “race-to-the-bottom” fares and placed in deadly competition with other desperate workers.

Such is the result of the “new gig economy” — where someone is told you can “be your own boss” with “flexible hours,” but which really means 18-hour days with no minimum wage, no overtime, no health care, and the “freedom” to drive your own car and pay your own vehicle insurance. And, by the way, compete with every other taxi, limo, livery or Lyft/Uber driver on the road.

But there is some very good news. Driver-workers won a huge victory Aug. 8. The New York Taxi Workers Alliance, after months of organizing, (encompassing the time of the six suicides), successfully drove legislation through the New York City Council that makes the city the first in the U.S. to regulate Uber and Lyft.

One of the drivers tweeted the day of the victory: “We just beat Wall Street!”

It’s one of the first worker victories in the 21st century gig economy, and all workers should celebrate it.

In reality, the gig economy has a long and gruesome history. It was called “piece work.” Women labored in isolation day and night, each in her own room, to produce knitted or embroidered pieces at whatever small sum per item the boss offered, all the while cooking, cleaning, caretaking their children. Black women were paid next to nothing for washing and ironing at home. No minimum wage, no overtime, no health care. You provide your own scissors, needle and thread, soap and irons.

Karl Marx and Friedrich Engels described the 2018 gig economy 170 years ago in the 1848 Communist Manifesto: “The laborers, who must sell themselves piecemeal, are a commodity, like every other article of commerce, and are consequently exposed to all the vicissitudes of competition, to all the fluctuations of the markets.” Before they begin to organize together, this working class is just “an incoherent mass … broken up by their mutual competition.”

Since 2011 in New York City, the forces of capital have placed taxi and limo drivers in bitter competition with Uber and Lyft drivers, while using the techno-driven companies to reap immense profits from passengers and workers alike.

The victory in NYC came from both “driver power” and “driver unity” since taxi and limo drivers overcame the competition to band together with exploited app drivers.

They won minimum fare rates across the industry, as well as minimum pay for app drivers and app passenger fares. There will be a cap on the number of new for-hire vehicles for 12 months, with the exception of wheelchair accessible vehicles. The latter stipulation is one the NYTWA insisted on, in collaboration with the disability rights Taxis for All Campaign.

The NYTWA expressed this worker unity in an Aug. 8 statement:

“Today, New York City said, no more. We cannot be bought. Workers must come before a corporate agenda of greed at all costs.

“Today, a workforce of over 100,000 men and women, a workforce of immigrants and people of color, finally have a reason to hope for an end to this crisis. Today we took the first step. Tomorrow we will continue to fight.” (nytwa.org)