After neo-Nazis decided to commemorate last year’s Unite the Right march in Charlottesville, Va., with an Aug. 12 march this year in Washington, D.C., it was leaked that the Washington Metropolitan Area Transit Authority would coddle the Nazis with private cars. But Amalgamated Transit Union Local 689 immediately fought back. Local President Jackie Jeter said in a statement, “More than 80% of Local 689’s membership are people of color, the very people that the Ku Klux Klan and other white nationalist groups have killed, harassed and violated. The union will not play a role in their special accommodation.” (Washington Post, Aug. 3) The statement went viral, and WAMATA responded Aug. 4 that it was canceling the special train.

But that’s not what happened Aug. 12 between approximately 1:20 and 1:40 p.m. Metro’s management, in conjunction with the police, opened the north entrance of the Vienna station to transport the Unite the Right fascists. The union immediately called out WAMATA for lying to riders and the public: “DC, now you see who was telling the truth about the racist marchers being escorted onto Metro and who lied,” ATU Local 689 tweeted. “[Metro General Manager Paul] Wiedefeld lied to riders and public when the truth was more convenient.” (The Hill, Aug. 12)

Workers World expresses solidarity with ATU Local 689 in denouncing this treachery and cheers the local’s resistance.

JetBlue Airways Corp.’s 3,037 pilots approved the first labor contract in the carrier’s history by 74 percent of those voting, announced the Air Line Pilots Association on July 27. The agreement, which took more than three years of negotiations, “provides significant pay increases, improvements to retirement and enhanced working conditions,” said ALPA President Tim Canoll. This is JetBlue’s first labor agreement since its founding in 1998.

Meanwhile, the company’s flight attendants voted this spring to join the Transport Workers Union, after two previous attempts failed. “This … is yet another example of the tide turning in America as workers continue to lock arms and fight back to defend their livelihoods,” said TWU President John Samuelsen in an April 17 statement. The inflight members’ bargaining team met June 28 to discuss upcoming contract negotiations, which include job security, a grievance procedure, improved wages and benefits, and “a seat at the table in case of possible merger or acquisition.” (TWU.org, June 28) 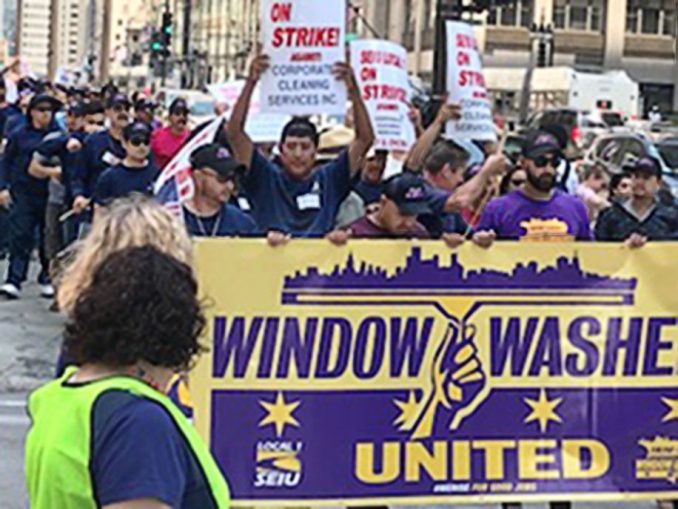 About 260 Chicago window washers — who struck for over a month after their contract expired June 30 — won a historic 27 percent wage hike! This raises the pay that a seasoned window washer earns from $21 an hour to $26 over the life of the new five-year contract. An essential demand for these high-risk workers was also met: their life insurance was doubled from $50,000 to $100,000. (Chicago Sun Times, July 27) The union overwhelmingly ratified the contract. Washer Cruz Guzman cheered, “We put our livelihood on the line and won the biggest wage increase for Chicago window washers in Local 1 history.”

The bosses at Corporate Cleaning and Service 1, two of the six companies that employ the washers in the city’s downtown buildings, tried to beat the mainly Latinx workers down. The companies threatened that they’d go bankrupt, though they enjoy massive tax breaks. But the workers, represented by Service Employees International Local 1, fought back. They dressed up like superheroes and stopped traffic to bring attention to their low wages. (WW, July 10)

The 9,700 workers at Disneyland Park, Disney California Adventure Park and Downtown Disney, represented by four labor unions in the Master Services Council, ratified a new contract on July 26. (For background, see Workers World article, May 28.) Disneyland Resort officials agreed to a minimum wage rate increase of 40 percent within two years of the agreement. This will put cast members at $15 per hour by 2019, which will be one of the highest minimum wages in the country and three years ahead of the state’s minimum wage standard.

A full-time cast member who currently earns $11 an hour would earn an additional $8,000 per year. Minimum rates for hourly cast members will increase by 20 percent immediately from the current minimum rate of $11 to a new minimum rate of $13.25. Even though Disneyland Resort portrays this precedent-setting agreement as recognizing the value of its cast members, it took a well-organized union fightback campaign of many months to end poverty wages. (DisneylandNews.com, July 29)