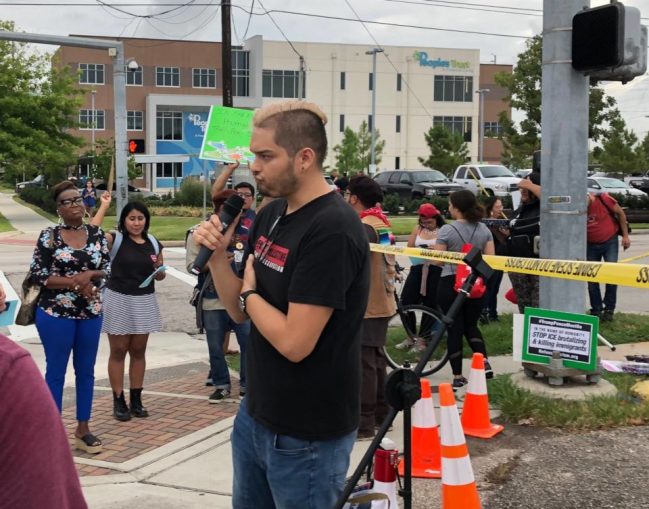 The latest in ongoing demonstrations at the proposed Houston Immigration and Customs Enforcement holding facility for ­unaccompanied minors was held Aug. 11. (It’s ironically located on “Emancipation Avenue” — recently renamed after a community struggle to change it from the name of a Confederate commander.) The highlight of the protest was wrapping the corner property in yellow “crime scene” tape.

Speakers explained that since the site was being repurposed for the crime of imprisoning children — that being a crime against humanity — it was appropriate to let the public know what was planned for the place. Regular demonstrations are also being held at the wealthy neighborhood home of the real estate magnate who owns the property.

Many demonstrators spoke of their horror in hearing about the purpose of the proposed site when thinking about their own children being snatched from them and herded into such a place. Tania Sediqi, speaking for the FIRE (Fight for Im/migrants and Refugees Everywhere) coalition, reminded the gathering that the im/migration crisis is global and ongoing. She said that even though she is U.S.-born, she considers herself a “third-generation immigrant” since her grandparents were torn from their ancestral home in India and forced into the newly formed nation of Pakistan, from which her parents migrated to the U.S.