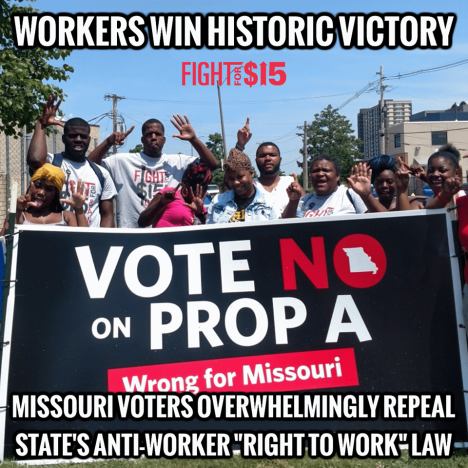 Tuesday, Aug. 7, was an election day in five states, mostly primaries or special elections. The most newsworthy vote, however, did not involve candidates for office.

On that day, voters in Missouri overturned union-busting “right-to-work” (for less!) legislation by a 2-to-1 margin.

Union membership skyrocketed during the labor upsurge of the 1930s. The post-World War II strike wave was the biggest in this country’s history. Unions won “union security” clauses in their contracts that made every worker they represented a dues-paying member. In order to weaken organized labor, the U.S. Congress passed the 1947 Taft-Hartley law that has allowed states to ban union shops.

By making union membership optional, these bills give unions less power at the bargaining table. As a result, RTW states have lower average wages, more uninsured workers and higher rates of on-the-job injuries and deaths.

Under RTW, it is illegal to require an employee to be a member of a union, but perfectly legal to make low wages, mandatory overtime, lack of health benefits, supervisor abuse and a whole host of injustices a condition of employment. As the saying goes, “If you don’t like it, there’s the door.”

A union army fights back

Unions in Missouri fought back. An army of over 1,000 volunteers spread out across the state to collect the 100,000 minimum number of signatures needed to put RTW up for a statewide vote. Over 300,000 signatures were actually collected. After getting the issue on the ballot, union members continued their tireless efforts with phone banking and door knocking.

The Missouri effort paralleled the successful defeat of Senate Bill 5 in Ohio in 2012. That bill would have banned collective bargaining for all public workers, going even further than a similar bill in Wisconsin that contained an exception for police and firefighters. In Ohio, union volunteers collected 1.2 million signatures — almost five times the legal requirement — and defeated SB5 handily. Ohio is still not a RTW state.

Missouri’s Greitens, who resigned in June as governor after an extramarital affair in which he photographed a woman nude without her consent, nevertheless campaigned to keep RTW law through his shadowy group, A New Missouri. Right-wing, corporate-backed, a­nti-union organizations spent millions to convince workers that they would save a bundle of money by not having to pay union dues. But they were outspent by labor and were crushed at the polls.

Of the state’s 114 counties, 100 voted down RTW. In St. Louis, the vote was 88 percent “no.” A majority of the city’s residents are people of color. When workers have unions, racist and sexist inequality is reduced. While all union workers, on the average, make more money than nonunion workers, the benefit is greatest for workers of color and women. Also, for LGBTQ workers, a union contract is often their only legal defense against discrimination in states where laws do not protect them.

The pushback by the unions, involving members at the grassroots level, came shortly after the reactionary U.S. Supreme Court ruling in Janus v. AFSCME. The high court ruled on June 27 that public sector unions could no longer require nonmembers, whom they are legally obligated to represent, to pay a “fair share fee” in lieu of union dues. This effectively made every state in the country “right-to-work” for public sector employees.

After the Janus ruling, statements from various unions made it clear that they were not throwing in the towel and letting anti-union forces have their way without a fight. In Missouri, labor won this round.

Commentators in the media are quick to point out that this union win happened in a state that went overwhelmingly for Trump in 2016. The vote was a setback for Trump, who is at war with the labor movement. His attitude was made clear most recently with a series of punishing executive orders aimed at unions such as the American Federation of Government Employees, which represents federal workers.

Yet some workers who voted against RTW in Missouri are still supporting Trump. Reasons given reveal backward attitudes toward migrants and the Black Lives Matter movement. It was the rebellion in Ferguson, Mo., after the racist police killing of Mike Brown, that gave impetus to an upsurge in the BLM movement nationwide. (Washington Post, Aug. 10)

Black Lives Matter is absolutely a union issue. Mike Brown’s mother Lezley McSpadden is a union activist in the Food and Commercial Workers union. Philando Castile, killed by cops in Minneapolis, was a Teamster. Jovan Fresco, killed by security guards in Rockford, Ill., was the son of a United Auto Workers’ Fiat Chrysler worker.

Racism is the number one tool that the bosses use to divide the working class. If union members want to give real meaning to this victory in Missouri, they must dump Trump — and the systemic racism and bigotry he epitomizes — and work to build classwide solidarity.