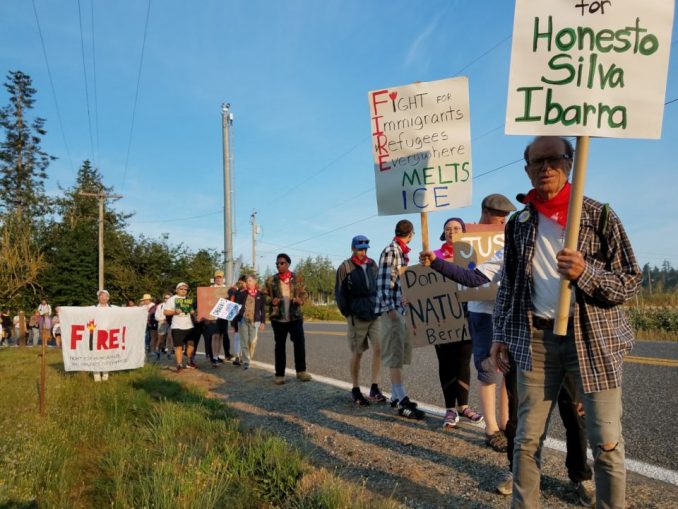 This march honored the life of Honesto Silva Ibarra, an im/migrant farmworker who was worked to death at Sarbanand Farms during wildfires that suffocated the Pacific Northwest in the summer of 2017. Ibarra was a guest worker in the U.S. under the H-2A visa program, a seasonal permit for migrant workers.

FIRE activists and Workers World Party members from Portland, Ore., and  Seattle and Federal Way, Wash., joined the march, which ended in a Peoples’ Tribunal in front of the main office of Sarbanand Farms. (FIRE is a national grassroots movement that stands for Fighting for Im/migrants and Refugees Everywhere.)

The march began at 6 a.m. and went for 12 miles, the number of hours in a typical farmworker’s day. About 300 demonstrators walked single file over many country roads, surrounded by fields being farmed by im/migrant workers. In Spanish, chants of solidarity, “Campesino Power!” rang out: “What do we want? Justice! When do we want it? Now!”

The marchers made their way to the Canadian border to highlight the fact that workers at the farms are under the jurisdiction of the U.S. Border Patrol, as well as that of U.S. Immigration and Customs Enforcement. Along the route was an ICE detention center, where community members and activists demanded an end to ICE terror against farmworkers and rallied the marchers for the tribunal at Sarbanand Farms.

The Peoples’ Tribunal was led by a farmworker organizer and a C2C organizer who introduced the judges and called for witnesses. Among those who came forward was Lucy Suárez, who lives on land that harbored 70 workers fired after protesting Ibarra’s death. Her testimony included the story of a man with an infected foot wound so painful it brought him to tears at the slightest touch, but who was refused treatment at Sarbanand Farms. Many other witnesses came forward with similarly horrific stories of abuse by the farm.

The judges unanimously delivered the verdict that Sarbanand Farms was guilty of the murder of Honesto Silva Ibarra and many other human rights atrocities against its workers. C2C is calling for a boycott of Naturipe Farms, one of the main buyers of Sarbanand berries, and raised a demand for workers at the farm to be granted a collective bargaining agreement.

The evening before the march, C2C held a public forum in nearby Bellingham, Wash., to educate community members about the conditions of im/migrant farmworkers and the H-2A visa program.

The first speaker, David Bacon, has written extensively on the subject of how U.S. policy forces migration from the Global South. He praised the 70 H-2A guest workers fired by Sarbanand for going on strike after Ibarra’s death and pointed out that fired guest workers faced deportation. They were able to find refuge on nearby land of a community member, an impromptu encampment dubbed Camp Zapata. After the community organized to pay for transportation, the workers returned to Mexico, without having received their final paycheck.

H-2A guest workers are routinely denied pay or are moved from farm to farm so owners can avoid paying them. Many workers report being relocated and not knowing where they are. The H-2A program mandates that the farms offer livable housing, but C2C organizers assert that as many as 16 people are housed in a single shipping container unit at Sarbanand. Guest workers are only guaranteed 75 percent of the hours promised in their contracts, with potential new legislation reducing that number to 50 percent, leading to gross underpayment of wages.

All the countries of origin for the majority of H-2A guest workers have a common problem — poor conditions created by U.S. foreign policy. From the CIA-backed overthrow of leftist president Jacobo Árbenz in Guatemala in the 1950s to NAFTA’s debilitating effects on the Mexican economy in the 1990s, to subsequent destabilization attempts in Central and South American countries, the U.S. has been at the forefront of creating oppressive conditions that force H-2A guest workers to seek economic opportunity beyond the borders of their homeland.

At the present time, about 20,000 H-2A guest workers are in Washington state alone. This figure could be expanded exponentially, since state Rep. Dan Newhouse is pushing for a bill which would include nonseasonal farmworkers in the H-2A program.

U.S. global economic hegemony was first founded on the seizure of the lands of Indigenous peoples and on the unpaid labor of people held and tortured in chattel slavery. Now the U.S. ruling class continues its rapacious injustice through exploitative wage slavery, including such arrangements as H-2A “guest worker” visas.

All who fight for im/migrant rights and against wage slavery should raise up the struggle of these farmworkers.