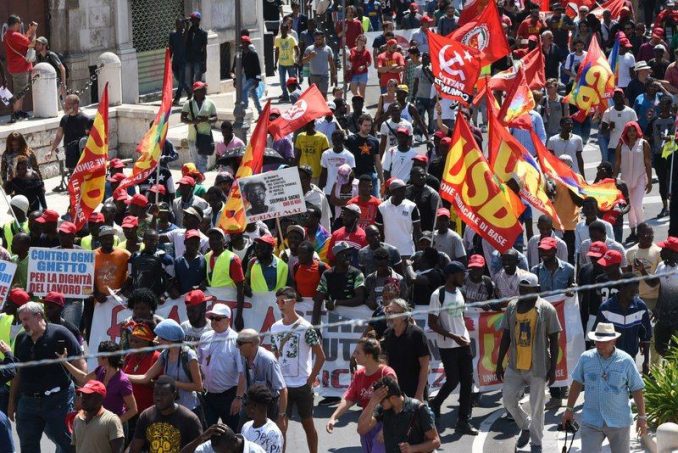 After the death of 12 farmworkers in a traffic accident in southern Italy on Aug. 6, hundreds of migrant farmworkers walked off the job there. The USB trade union federation called for the strike.

In a “march of red caps” — a reference to the covering which the workers usually use to protect themselves from the blazing sun — the protesters went to the prefecture [representing the national government] in the city of Foggia and demanded decent working conditions. At a demonstration by the CGIL, CISL and UIL trade unions in Foggia, member of parliament Roberto Speranza, who is also chairperson of the left-wing movement “Free and Equals” (LeU), expressed his solidarity with the migrants.

Michele Emiliano, president of the regional government of Puglia and a member of the Democratic Party (PD), supported the strike as “a step against exploitation.”

The workers who were killed were all from countries outside the European Union. They were crammed into a small truck which hit a tomato transporter truck head on. The apparently overtired drivers of both trucks also died.

Two days earlier, four Africans were killed and four others seriously injured in a similar collision. The left-leaning daily Il Manifesto commented that these accidents once again showed how migrants in southern Italy have to work under inhumane conditions and how they are held as slaves.

In Puglia, harvesters, mainly from Africa, but also from Poland, Bulgaria and Romania, have to work up to 12 hours a day in the scorching summer heat of over 40 degrees Celsius [104 degrees Fahrenheit]. They live in slums without running water or toilets and have no health care. Women workers are exposed to sexual harassment and violence.

As the daily La Repubblica, published in Rome, reported, most of the workers are subject to what is known as a “caporalato” system of organized, undeclared work. They often earn little more than 1 euro per hour, while the standard wage is six times higher. In addition, a part of the workers’ income is deducted as rent for miserable shelters.

The number of farmworkers exploited in this way is estimated at around 100,000 in Puglia alone. According to the CGIL, if the regions of Campania and Sicily are included, at least half a million people are illegally employed in grape, olive and orange harvesting; tomato, onion and strawberry fields; and peach and apricot plantations.

Meanwhile, racism continues to spread, fueled by the Italian government. La Repubblica reported a new incident: On Aug. 7, on the Trenord regional train between Milan and Cremona, the train engineer called on the loudspeaker for “Gypsies [sic], beggars and other troublemakers” to leave the train.

Citing police information, the Italian news agency ANSA reported on Aug. 9 that two 13-year-olds admitted having fired two shots at a Gambian man in Pistoia in northern Italy on Aug. 2. The boys said it was an empty pistol and they “just wanted to scare” the Gambians. According to reports, the boys also racially insulted the 24-year-old man.

This article was published on Aug. 11 in the German newspaper Junge Welt. Workers World Managing Editor John Catalinotto translated it.